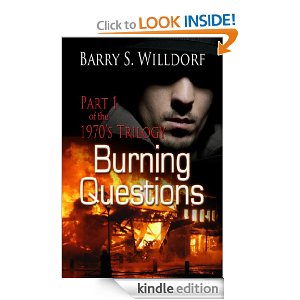 Marketing: I've promoted it regularly on 11 Yahoo groups. I've advertised on FB. Done a giveaway on Goodreads and LibraryThing. I've sent an email announcement to about 400 contacts. I've done press releases and gotten one large article in a local paper. I maintain a blog for the book. I promote directly on FB periodically, when there is some sort of tie-in. I've had three readings, one at a bookstore and two salons. Reception has been good but it hasn't turned into sales. I've done two guest appearances on blogs. I have a YouTube trailer. One review (four stars.)

Link to book on Amazon: Burning Questions [Part 1 of the 1970's Trilogy]

When the young heir of a wealthy Gloucester, MA family, is found shot with his step-father’s gun, the authorities quickly declare it to be a teenage suicide. But his mother wants an investigation. The family’s white-shoe law firm puts Nate Lewis, an inexperienced former intern, on the case. Was he picked because someone wants a bungled investigation or cover-up? Then, Christina Lima, the deceased’s stunning girlfriend from a poor Portuguese fishing family, tells Nate that the young man witnessed a hotel arson just before he died, and together they stumble onto a conspiracy to burn down the town’s old hotels. Soon Nate and Christina are running for their lives—and falling in love—as arsonists-cum-hit men stalk them all over historic Cape Ann.

On the day before I met Christina, I was doing a very credible impersonation of a bum. I’d even begun to believe it myself. But in my defense, I was facing the prospect of being drafted and there didn’t seem to be much point in having ambition.

I once had a professor of trial practice who began his classes by reading from an instruction judges routinely give to jurors at the beginning of a case:

“Remember to keep an open mind and do not form or express an opinion about the case until all the evidence has been received.”

If people had been following his advice, I’d never have met Christina Lima. We both were messy little facts.

I was absentmindedly tapping into a can of Krueger ale when a rag-top Coupe DeVille, just off the showroom floor, pulled onto Shore Road. Though much of her face was hidden by a broad-brimmed straw hat and oversized shades, enough epidermis was out there to tell that its driver was a classy lady with a “Coppertone tan.” She pulled to a stop beneath my window, got out and mounted the stairs slowly. Her slender hand gingerly dodged the splinters on my paint-chipped rail- ing. I didn’t know anybody who could afford a new Caddy. I assumed she’d come to the wrong address.

She was dressed in an expensive plaid skirt that stopped at mid-thigh, and a sleeveless top. Her fine-boned arms had muscle definition and despite some knobbiness in the knees, her legs were long, slim, and looked like they’d seen a lot of exercise.

Comments: I like the cover. I think it fits the genre well. I love the guy with the shadowed face. That's my favorite part. I also like the fonts used. I think the cover isn't the issue here. It's very well done, in my opinion.

The book description kind of confuses me. I had to read it several times just to understand the connection between the events described. I think rewriting the blurb will really help this book.

The beginning of the book didn't grab me. It kind of jumps around like the description. I had a hard time connecting what being a bum had to do with a professor of trial practice, and what they both had to do with meeting a woman.

I would get more opinions on the blurb and the beginning of the novel. If the whole novel jumps from subject to subject, I would definitely put the whole thing through a critique group and tighten it up. There should be a natural progression in a book. Because A happens, then B happens, and because B happens then C happens. If we go from A to 3 to Orange, we get confused.

My suggestion would be to find some other authors and tighten up the blurb and get critiques on the novel itself. What do you guys think?
Posted by Victorine at 9:38 AM