Author: Kevin Anthony
Genre: Horror
How long it's been on sale: Beginning of March 2012
Current price: Free
Marketing: Twitter, Contacting Those Of My Mailing List of 4,100 Fans. Contacting Bloggers For Guest Post and Reviewers
Total given away so far: 288
Link to book on Smashwords: Mad Moral

Twenty year old Ford Fischer is a serial slasher desperately trying to resist the lure of the blade. After taking a life, Ford's regret consumes him, leading him to self-mutilate his hand in hopes of preventing further mayhem. All the while a series of family issues threaten to sidetrack his quest for mental stability.

His drug abusing mother disappears after an argument between her and Ford; leaving him sole caretaker of his transgender parent, whose life is slowly deteriorating from a mysterious illness. The parental strain leads him to weigh the strength of his bond with the two divorcees.

Just as Ford feels nothing more could go wrong, he finds himself in the middle of a slashing spree - the victims being slashers themselves. He's forced to play the role of detective to avoid becoming suspect, or worse, a victim. As slasher after slasher is eliminated, Ford seeks out the blade-friendly stalker with the morally conflicted mindset "slash or be slashed."

MAD MORAL is the world of Ford Fischer, where in murderous stuffed animals, demonic possessions, gigantic creepy crawlers, knife wielding slashers and much more madness are common place. Fischer, coupled with a romantically conflicted exorcist and a dreamer who redefines night terrors, leads us through a twisted world that can be best defined as one of a kind.

Tonight, the motive was madness. The senior class of Draper Preparatory High School gathered for one of the many hoorahs planned for their final year. It was a night for growing up, a night when cheerleaders conversed with those who envied their beauty, the chiseled athletes apologized to those who they terrorized, and the socially awkward finally found their voice. It was a chaotic scene, music blasted, the spiked punch flowed and expensive vases were shattered. They danced; they sang; they drank. They would, in all likelihood, never see these people again, and the possibility of hooking-up with their long time crush and making a lasting impression was deeply embedded in the minds of the partygoers, surviving the evening an afterthought.

For Ford, however, Becky’s party was the perfect scene for a slashing. He stood across the street from the suburban home, hidden under the shadow of a palm tree. The autumn wind blew, ruffling the leaves of the gently swaying palm as well as Ford’s dark, low-cut hair. He wore a giddy smile across his thin, almost gaunt face. In the front pocket of the navy blue hooded sweatshirt he wore, his right hand gripped the handle of a knife. In the furthest reaches of his mind, where the madness roamed rampant he envisioned the blade drenched in blood, the warm, crimson liquid dripping onto his hand. The anticipation of the slashing, filling him with a burning excitement deep inside himself, prompted him to start across the street.

The driveway was crowded with the various cars of the party attendees, all more expensive than the whole of Ford’s apartment, furniture and all. They were the children of those who were in possession of master degrees and trust funds: doctors, lawyers, and politicians, to name a few.

Comments: I am not getting a horror vibe from the cover. The cover is very important because it's the first impression your reader is going to get. The cover doesn't look very scary. It also doesn't look professional. When we put our books up for sale, or even to give them away, we are on the same bookshelf with the big names. Let's just look at some other horror covers in comparison. 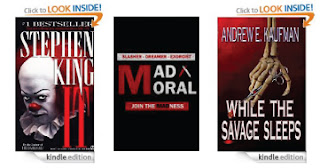 Our books are side-by-side with the great books out there. Stephen King's book looks darn scary. And I haven't read anything from Andrew Kaufman, but there's a skeleton and blood on the cover. It screams "Horror." Mad Moral in the middle doesn't look scary to me. It doesn't say Horror. It looks like a homemade cover, not professional at all. I would highly suggest a new book cover.

The description is kind of all over the place, with too many details. I feel confused after reading it and the last paragraph makes me wonder if this isn't a parody instead. What is the inciting incident? Is it when he kills someone? Is it when his mother leaves? Or when a slasher starts killing other slashers? I think the description needs focus.

The beginning starts off passive for me. I'd rather start out in Ford's point of view, but instead we start in the point of view of the kids at the party. I'm not sure why Ford wants to kill, but after reading the description and knowing that he regrets killing someone I'm not very moved by his compulsion to murder. I don't fear him as I think I should. He comes across as a character to pity, but again, that is after reading the description. Maybe if the description were tweaked I might feel differently, I don't know.

What do you guys think?
Posted by Victorine at 9:20 AM

Email ThisBlogThis!Share to TwitterShare to FacebookShare to Pinterest
Labels: Horror