The Garden on Sunset 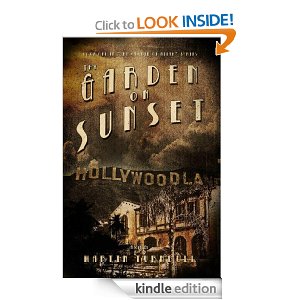 HOLLYWOOD…as seen through the eyes of its most infamous garden.

When Marcus Adler’s father runs him out of Pennsylvania, he can think of only one place to go: 8152 Sunset Boulevard, the home of luminous silent screen star Alla Nazimova, who visited him on his sickbed when he was a child. But when Marcus gets to Hollywood, Madame Nazimova’s home has been converted to a hotel. Marcus checks into The Garden of Allah and starts his new life. He soon finds friends in Kathryn Massey, who ran away from her overbearing stage mother to become a journalist, and Gwendolyn Brick, a hopeful actress from the Other Hollywood—Hollywood, Florida—who wants to try her luck in Glitter City. The three naïve hopefuls band together to tread water against a tidal wave of threadbare casting couches, nervous bootleggers, human billboards, round-the-world zeppelins, sinking gambling boats, waiters in blackface, William Randolph Hearst, the Long Beach earthquake, starlets, harlots, Harlows and Garbos. But how will they get their feet inside Hollywood’s golden door?

THE GARDEN ON SUNSET is the first in a series of novels following Marcus, Kathryn and Gwendolyn as they leap and lurch, win and lose their way through Hollywood’s golden years. If you love Armistead Maupin’s Tales of the City books, you’ll want to get lost in The Garden of Allah.

When the Hollywood Red Car lurched to a stop, Marcus Adler pulled open his eyes to find a wheezing old conductor staring right at him.

Marcus looked around. He was the only passenger left. “Where are we?”

The conductor jerked his head towards the door. “End of the line.”

“Don’t suppose you know where 8152 Sunset Boulevard is?”

Marcus took that for a no, picked up his cardboard suitcase, and climbed down to the street. A line of rickety stores huddled on the south side of Sunset Boulevard up to where the asphalt ended; a sign near the curb read Los Angeles City Limit. Past the sign, west of Crescent Heights Boulevard, Sunset disintegrated into a wandering dirt road. A knot of horses stood in the shade of a tree with thin, dusty leaves Marcus had never seen back in Pennsylvania. One of the horses raised its head to study him for a moment, then returned to grazing.

“Hey!” The conductor hung from the streetcar’s doorway. “8152 Sunset? Try thataway.” He pointed towards the horses.

Eighty-one fifty-two Sunset Boulevard, Hollywood, California. It was an address Marcus had repeated over and over to himself since that time when he was eleven years old, swollen grotesquely with diphtheria in the hospital. His parents had written Madame Alla Nazimova a letter at his request, never thinking that a motion picture star so unspeakably exotic, so stupefyingly glamorous would respond. But she did. And she came to call on him, a diaphanous vision in lavender tulle. How kind she was, and so humble. Surely she would remember him. How many bedside visits had she made to children inflated with diphtheria in the middle of Pennsylvania? How many did she look in the eye and say, “If you ever come to Hollywood, I want you to come visit me. My house is very large, and I have plenty of room for you. I live at 8152 Sunset Boulevard in Hollywood, California.”

Comments: First of all, let me say that selling 117 in the first three months (this was submitted to me the end of March) is pretty decent. I'm guessing the book just needs time to get going, but I'll look at things anyway.

The cover is good, but the Hollywood kind of throws me off. It looks like it should be part of the title, or sub title, and I feel like I would like it better without it. Having said that, I do like the feeling of the cover, I think it nails the genre and the time period.

The description needs work, in my opinion. The first part is fine, but the end where it lists things the characters face should be cut. It felt like a laundry list to me, and didn't make me want to read the book. I would pick the main conflict and expand on that. Who is the antagonist? Maybe introduce them in the blurb. Or maybe just stick with the main conflict.

The beginning of the novel is good, in my opinion. (I would cut 'right' out of the first sentence, I think it's redundant, but other than that I don't have any nit-picks about the writing.) The premise is kind of interesting, and it's well written. I would continue reading if I had picked this up.

I feel like the main issue with this book is the blurb. I would rework it, get some outside help from other writers, and that should help the book sell better.

What do you guys think?
Posted by Victorine at 3:57 PM

Email ThisBlogThis!Share to TwitterShare to FacebookShare to Pinterest
Labels: Historical