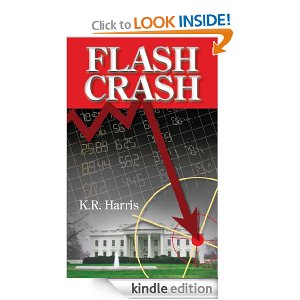 Author: K.R. Harris
Genre: Political Thriller
How long it's been on sale: 10-5-2011
Current price: $2.99
Marketing: FaceBook, e-mails, business cards printed with book cover on one side and Amazon URL for the book on the other side.
Enrolled the book in KDP Select: 3 days free = 10,300 "freeloads," 1 day free = 255 "freeloads"
Total sold so far: 165
Link to book on Amazon: Flash Crash (Abby Churchland Series)

Two individuals clandestinely infiltrate the electronic trading platform of the New York Stock Exchange, steal sixteen million dollars in a fraction of a second, but incite a cascade of events leading to what Wall Street referred to as the "flash crash".
Discovering the truth behind a massive government cover-up and a top secret assassination, C.I.A. covert operative Abby Churchland and Special Agent Lance Brooks become targets of the very government they serve.
It is a story of two courageous individuals who dare to match wits and plot revenge against the most powerful government on earth. Their resolve will be tested and their lives changed forever and in the process one of them will finally discover what they have spent their entire life searching for.

On May 6, 2010 at 2:42 p.m., the Dow Jones Industrial Average began to fall rapidly, dropping more than 600 points in five minutes. Financial mayhem continued for seventeen minutes.  By 3:12 p.m. the market had regained most of its loss. Both Wall Street and Main Street wanted to know why.

The face of terrorism had a new look. Or did it? Had it been terrorism or just terror? Financial terror for sure, but why? How? Over a trillion dollars of value had evaporated in a matter of minutes from stocks traded primarily on the New York Stock Exchange. A company worth thirty billion dollars at two-forty-one p.m. was worth nothing three minutes later. Several major United States corporations lost ninety-five per cent of their stock price in less than a tenth of a second. Had an organized foreign or even domestic terrorist group waged economic warfare against the citizens of the United States? Had a rogue trader or group of traders, with insider information, tried to manipulate the stock market?

Special Agent Lance Brooks needed answers. Answers were expected. A personal meeting five weeks ago, with the Secretary of State, concerning the events of May 6 had left no doubt of that. The Secretary had been very clear. His job, in fact his entire career, was on the line and so far he had no answers. His twenty-six years of service, specializing in counterterrorism with the United States Diplomatic Security Service (DSS), had taught him there usually were no easy answers.

His experience had also taught him you never went home until the last surveillance team reported in, even if it was late Friday evening. He stood from behind his desk, stretching his back upward. It hurt most of the time. Chronic arthritis, combined with degenerative disc in his L4 and L5 vertebra, is what the MRI had shown according to the doctor. He thought about another cup of coffee. Better not; too much acid on his stomach already. He opted instead for water and a mint. Waiting was the hard part, it always had been. Finally the call came.

Comments: The cover isn't horrible, but I do think it could be better. Sometimes the bar of color works for a book cover. This is one of the times that I don't think it is working. I like the image of the white house, that really shows the genre well. I don't mind the stock market crashing arrow, but it's not my favorite part of the cover. I would make the white house larger and the crashing arrow smaller or put less emphasis on it.

The description should have spaces in between the paragraphs, making it easier to read. The text itself is a bit confusing. I'm not quite sure if the people who broke in a stole the money are the main characters who are trying to "plot revenge on the most powerful government on earth," or if the main characters are trying to unravel the mystery. It reads like the former and I'm thinking that might be a big part of the problem with this book not selling. Most political thrillers I've read and seen are about stopping corruption and not exacting revenge on the government by stealing money and causing the market to crash. If it's the latter, the description really needs re-working.

The author sent me about 760 words instead of the first 300. When this happens, I feel like the author is trying to say to me, "But the story doesn't get good until you get to the 760 mark." My response would be, "Then make the first 300 better."

The first 300 of this book is all telling. All back story. Cut the telling and back story and start with the action. If the story doesn't really get good until the phone conversation (that I had to cut because we got to our limit) then start with the phone conversation. The reader can piece together what has happened, if the author is doing their job. Give us the details as the story unfolds, in actions and dialogue. I don't want to read several paragraphs of "Just to set the scene, here is what is happening." I want the scene to start. I suggest throwing up the first chapter on to a critique website like critiquecircle.com and getting some eyes on it. Get help with the beginning and it will sell better.

My suggestion is to tweak the cover, get rid of the red bar, rework the blurb and submit the first chapter to a critique group. What do you guys think?
Posted by Victorine at 11:06 AM