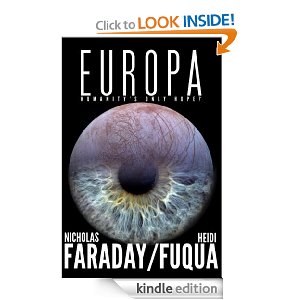 By the year 2123 climate change has decimated the Earth's most precious resource, her oceans. Worldwide droughts have created massive deserts where lush countryside once existed. The seas have turned toxic and the polar caps have disappeared. With its habitat quickly shrinking, humanity needs a silver bullet. Ten teams have been dispatched to Jupiter's sixth moon, Europa, and are tasked with retrieving a micro-organism known as Archaelleonous from the frozen moon's sub-ice liquid ocean. This precious resource is believed to be the key to restoring life to the Earth's oceans and resetting the climate.

Told from the perspective of each crew member, this is the story of the last days of Galileo Team 10. Six and a half years into a mission besieged with tragedy, complications and conflict, the diverse crew battles inner demons, mysterious afflictions, and each other in the quest for success. Millions of lives hang in the balance as the seven crew members risk everything in the harshest climate humans have ever ventured, on EUROPA.

First 300 Words: (Note From Author: Because each chapter is written from a different character's perspective, the first 300 words aren't really representative of the bulk of the book.)

"Nature is relentless and unchangeable, and it is indifferent as to whether its hidden reasons and actions are understandable to man or not." -Galileo Galilei, 1564-1642 CE

My bones are cold.

The chill sinks to the depths of my soul.

It settles in and there's no warmth left.

The Station is warm.

Tapping the eraser on the paper doesn't warm my soul but it helps with the numbers.

It helps me count something tangible.

The eraser is real.

The paper is real.

The noise is real. In theory.

I scribble through the writing on the paper.

Cold gets in my bones

It sinks deep into my soul

Til there is no warmth

That means the numbers are coming back.

The clock on the wall ticks out of sync.

It throws my count off and the fractals come back.

My count is accurate.

Staring at the clock doesn't make it move any faster.

My attention returns to the paper on the desk.

The paper darkens from a spatter of sweat.

A cardioid with three period bulbs.

Of course it is.

Did I touch my forehead?

My fingertips are wet.

I attempt to wipe the sweat away with the back of my hand.

More cardioids splatter on my haiku.

Comments: I like a lot of things about the cover. I like the eye. I love the fonts. I do like that the eye changes into something else at the top, but I can't tell what it is. That hurts the effectiveness of the cover in my mind. If I could tell at a glance what that is, I would like it better. I might like a dead world type of a scene on top, since your description talks about deserts and dry land. But overall I do like the cover. Nice job.

The description starts out good. I like the first paragraph. It gives me a succinct background and introduces me to the world, and what the conflict is. My problem comes in the second paragraph. This is where I was expecting to be introduced to the character I would spend my time with during the book. I would prefer the second paragraph to focus on one of the main characters. Sharing the spotlight equally between ten characters seems like a very hard thing to do successfully. I have a hard time with three or four main characters. Ten would be very difficult for me to write, and possibly difficult to read. It would have to be done very well. (And I'm not talking ten minor characters, I mean ten major characters who we get inside their head and get to know very well.)

I know the author said the first 300 words doesn't portray the entire book, however most people start reading and think the beginning of the novel gives them a real taste of how the novel is going to read. This book starts out deep into one character's mind. I assume his name is Ganesh. There's no plot at this point. There's just one guy, bored out of his skull, almost going crazy. If he's bored, the reader is going to be bored too. I'm sure other characters are more lively, but this might not be the best one to start with. I would not read further.

Now, I'm not saying that you can't go outside the box and write something that doesn't fit into the package we are used to. But be aware that if you do you will be swimming upstream, fighting for each sale. In general, people expect a book to have a beginning, a middle and an end. They expect to stay with one to three main characters for the story. They expect to read an inciting incident that starts everything off, read until they get to a climax, and then the story raps up and ends. These are the normal things we expect. This book seems to be presented in a different way than what we normally expect. This isn't bad in a literary sense, it's just bad in a marketing and sales sense. You're not selling what the majority of book sellers are selling. That *can* be a good thing if the book is exceptional and word of mouth gets out. However, that's a very difficult thing to have happen.

I think this book isn't selling because it is different from what we are used to when we go looking for a book to read. I don't think this necessarily dooms the book. It does make it harder to sell. I would make sure the book is exceptional. Get as many beta readers as you can, if you haven't already. If Ganesh isn't a good character to start with, start with a different one. Make sure the first 300 words grips the reader and doesn't let him/her go. Tweak the description until it does the same. You want to hook the reader early and string them along through the whole book. I do think this kind of book can sell, but it will be difficult in my opinion.

What do you guys think?
Posted by Victorine at 8:58 AM