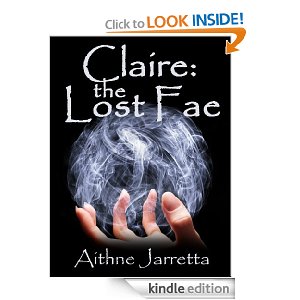 CLAIRE: THE LOST FAE will carry you through perilous dreams and danger invoked by legions of wicked daemons.

Perhaps you'll stick around and eventually soar over the San Francisco Bay rainbow.

One thing for sure, you'll wish you had never met a nasty hound from Hades, tangled with a wicked scarecrow or discovered the River Styx is real.

However, the chance to grow magically with Claire as she overcomes wicked challenges will win you over with appealing enchantment.

The window of opportunity is here--just a WhisperNet click away. Come in. Journey step by magical step as Claire carries you into this earthly in-between realm. Meet Claire's new friends (including Leeson, the love of her life) and challenge the darkest forces of Hades.

Fragmented edges of a horrific dream pummeled Claire into an emotional abyss. Blackness misted the edges of this outland realm, rippled eerily upon the airwaves and moved outward into the summer night.

In her nightmare, the surface of a braided rug skinned sensitive palms and skinny knees. Tiny fingers searched for any particle of hope. Its essence proved elusive.

An atmosphere of anger and fear blazed around her.

That was how she saw the world. She was tiny. Everything else was big and fearsome. Terror filled her life even at seven years old.

Claire screamed and crawled across the floor fast, but could not get away from Ms. Bierce's anger. Third foster mother in as many months, Ms. Bierce was the biggest and instantly the meanest.

Snotty nose interfered with breathing and tear filled eyes blurred everything, but did not hide the horror. Claire sniffled and tried to stand up as a last resort to get off the rough surface of the rug. She rubbed the back of a shaky hand across her face.

The massive woman shoved. The corner of a table jammed into Claire's back. Oxygen exploded from her lungs and carried a scream of desperation.

The air across the room parted magically on startling electrical waves. Within a heavenly light a beautiful woman shouted, "Stop that!"

Claire shoved curls away from her face, wiped eyes and stared. The glow around the woman made Claire think she was an angel.

"I know you did it!" screeched Ms. Bierce.

It was as though she did not see the woman who had appeared.

"Back to the convent!" Ms. Bierce's heavy bosom jostled as she shook a fist at Claire. "Wicked devil's spawn!"

Comments: The cover needs a little work. Google "Fonts you should not use," and you'll find Papyrus on almost all of those lists. Why? Well, it's overused but it also doesn't look professional. I would definitely try a different font. Now the image isn't bad, it portrays that there is magic in the book. It doesn't show any romance, but that's not bad if the romance isn't a major part of the book. If this is a romance novel set in a fantasy world, then I would change the image to a more typical romance image. But I'm guessing this is not the case. I would change the font and I think it will look a lot better.

I get what you're trying to do with the description but I don't think it's working. It doesn't tell me enough about the plot or the characters, so there's nothing hooking me in making me want to read it. I think the description needs to be chucked and totally revamped.

I read the beginning of the novel and saw some telling. In fact the first sentence is telling. This makes me wonder if the entire novel has this issue. I also cringe when a novel starts with a dream. Many, many new authors start their novels with dreams, thinking it will engage the reader. It doesn't. Sometimes they think they will reveal some parts of the character's past in the dreams. That doesn't work nearly as well as just starting the story and revealing bits and pieces as you go. If it were me, I would chuck the dream and start with the main character doing something. If this dream is part of her past, have this come out little by little as the story progresses. I might also suggest joining critiquecircle.com to help weed out the telling and learn to show more in the writing.

What do you guys think?
Posted by Victorine at 3:14 PM