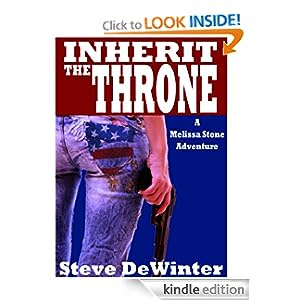 Written under the inspiration of James Patterson, Tom Clancy and Lee Child.

"...a quick, fun read that comes across as equal parts Jack Bauer (TV’s 24), Charlie Castillo (W.E.B. Griffin), and Mitch Rapp (Vince Flynn). There’s even a bit of Jack Ryan (Tom Clancy) in there...this is a book that would make for a perfect popcorn blockbuster..."
--Bibrary Bookslut

"In the latest action packed suspense fiction, Inherit The Throne by Steve DeWinter, we get to see Melissa Stone become the newest Jason Bourne...5 out of 5 stars and it falls in line for those of you that love books by James Patterson."
--Reviews from the Heart

"...fast, fun, enjoyable read that was comprised of non-stop action on pretty much every page, and a slew of characters that kept the action interesting and somewhat suspenseful...a few surprises that caught me off guard, and a delightful new heroine..."
--Curling Up By The Fire

"...the action just didn't stop!...If you like to read thrillers, then I would recommend this one! I am looking forward to reading more books by Steve DeWinter!"
--Black Diamond's Book Reviews

"...a page-turning, thrilling read. With explosive action on just about every page, we are catapulted into a novel brimming with suspense."
--Lost For Words

"I had heard all the good hype about it being a great novel, and I must confess, that I whole heartedly agree with that assessment! He totally ROCKS!"
--Reviews By Molly

Living under a new identity in the tiny Northwestern tourist town at the base of Mount Hood, Melissa thought she had finally escaped her past. That is until an assassin tries to kill her and forces her back into a treacherous shadow world she vowed never to return.

That same night an unmanned robotic SUV slams into the limousine of the Vice President of the United States and detonates with several hundred pounds of explosives. Melissa soon discovers that the attack on the Vice President and the attempt on her own life are related.

Time is running out to find out who wants her dead and why she alone holds the key to saving the President of the United States.

This is the Standard Edition. If you would like extra content such as deleted chapters and a sneek preview of the second Melissa Stone book, then you will want the Enhanced Edition. Either click the + sign next to Kindle Edition in the format section above, or search for "Inherit The Throne Enhanced". On Sale for $4.99 for a limited time!

Melissa Stone sat down on the crate from this morning’s egg delivery to rest for only a moment. Her shift was over in fifteen minutes, and she planned to go home and soak her feet for at least an hour or more. Working the job of a small motel restaurant and lounge server at the base of Mt. Hood in Government Camp, Oregon, did not help.

Melissa was only thirty years old, but she had been living her third life for nearly three years now. Three lifetimes worth of stress seemed to age her more quickly than she would have liked. Outwardly, she looked as young as her chronological age, but during these long weekday shifts, she felt every past injury that her body had endured.

The neon sign outside the motel laid claim to a restaurant on site, but in all honesty, it was nothing more than a glorified lounge with tables set up on the old dance floor that had seen better days. They provided a good view of the tiny stage that hosted Karaoke on Friday and Saturday nights.

Tonight was a typically quiet Thursday night that only brought motel residents in who were tired from their hike around Mt. Hood. Every night they dragged themselves into the restaurant section of the lounge exhausted and chatty about what they had just accomplished during the day. Melissa never received a complaint about the grease-stained menus. The hikers were always too hungry to notice and happily ordered food that was both good tasting and bad for them at the same time.

Tonight there were only two occupied tables, and Melissa was glad to have the hiking family at her table. The single man sat alone and had only ordered coffee. He held the menu up in front of him the entire time, but had continued to wave Julie, the only other server on duty, off for the past twenty minutes. Melissa would not have wanted to stay late because “Mr. Undecided” could not make a simple decision.

Sabrina's Comments:
What follows are my suggestions and first impressions. Yes, it's nit-picky. I get to focus on less than 1,000 words while you had a whole novel to edit. :) You are the author so no matter what I say, you get to decide how to present your book.

The cover: I notice that you have a different cover for your paperback. The paperback cover screams political thriller while the cover above looks like a vigilante type theme. I don't get the message that she's linked to politics at all. The flag on her butt says hippie to me. It's kind of an insult to the flag because you sit on it . . . does that message tie into your book? I don't equate hippies with protecting the president but maybe I live a sheltered life.

If I were searching for a political thriller, I would scan past your eBook thumbnail but I might stop on your paperback cover.

The blurb: Holy filler-words, Batman! I'm not a fan of books where it lists a sale price, then tons of reviews then finally gets to what the story is about at the bottom. I'm a click junkie like millions of other people. Catch me now or I wander away.

I counted. You have 5 sentences out of 23 that actually tell us what's IN the book. Reviews are great but there's a reason that Amazon puts them below the product description. If the reader is interested in what the book is about then they'll read the reviews. I don't think they would bug me as much if they were below the description of the book in your product description. Before it bothers me.

Also, I get trying to tie your name into the big names but it feels canned here. Your reviews already compare you to a big name or two so let your fans compare you and otherwise let the book speak for itself.

Listing the sale price twice feels car salesman-ish to me. Yup, you'll get this baby for this price no where else! By the way, this is the introductory price so you better grab it fast. Did I mention that we can't get anymore for 3 months . . . Once, at the end might not bug me so much but first thing, where I'm trying to figure out what the heck I'm looking at? As a buyer I would have immediately moved on to the next book -especially seeing it twice.

I would start looking at your reviews AFTER I read the actual product description. The problem is that it's lost in everything else.

The first 300: You lost my attention in the first paragraph. Why is it important that she's on an egg crate? You also have a sentence that doesn't quite fit finishing the paragraph. " Working the job of a small motel restaurant and lounge server at the base of Mt. Hood in Government Camp, Oregon, did not help." Did not help what? I know that you're talking about her planning to soak her feet in the sentence before but you haven't told us that her feet hurt yet! More importantly, you haven't shown us that her feet hurt.

Melissa Stone sat on a crate from one of that morning's deliveries. She slipped off one of her shoes and rubbed a blister forming under the ball of her foot. After fifteen minutes of rest, she slipped her shoe back on her foot and walked to the sink in the kitchen of the small motel restaurant and bar at the base of Mt. Hood in Government Camp, Oregon. As she washed her hands, she dreamed about soaking her feet at home after her shift ended.

Do you see the difference? Almost anyone can relate to a blister on their foot. I feel the pain with Melissa as I read because I've endured them. I can remember what it felt like. Those kinds of sensory cues suck me in as a reader.

Now that I'm studying the second paragraph, how about you have her rub the arch of her foot where she broke it in one of her past identities? I like that you bring in that she has battle scars but it's feeling like an info dump.

You're setting the scene in the third paragraph but I'd rather see it than have you tell it to me. She could take an order from a patron sitting at the bar from a small menu that boasted little more than beer and appetizers, have a lone regular lift his glass and shake it at her indicating he wants a drink from a four-top near the karaoke machine that is silent except for the weekends. the reader would get the same message but it wouldn't be as info dump-ish.

In the fourth paragraph, again, you have the opportunity to show us the hikers tromping in, picking up the greasy menus and ordering delicious sounding food that would cancel out the healthy advantages of their hike.

At the fifth paragraph, I'm finally getting interested. I can see the lone guy waving off the other waitress and I like the nick-name Melissa gives him. As a former waitress, I can completely relate to that!

End Analysis: I think you have a lot to work with here. The cover is eye-catching but I'm not sure it's sending the message you want. The description would be effective if it were more accessible and for the most part is sound. The first 300 has a lot of telling instead of showing but by the fifth paragraph I'm starting to get curious. Since I know there's an assassin coming after her, I wonder if it's the guy at the table. You have to leave a comment and tell me if I'm right. (And no cheating and telling me I have to read the book to find out!) :)

Good luck with your publishing adventure! Putting together a book is a big project. I wish you all the luck as you move forward.
Posted by Sabrina Sumsion at 8:11 PM