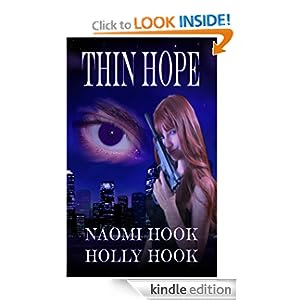 Author: Naomi Hook/Holly Hook
Genre:Fantasy/Science Fiction/Thriller
How long it's been on sale: November 18, 2011
Current price: $.99
Marketing: Advertised on author blog and Bargain eBooks blog (which I run), Librarything giveaway, submitted to two dozen book blogs (only 2 interested in reviewing it so far), advertised in B & N forums, Facebook, etc. Cannot yet advertise on many sites due to not having enough reviews to qualify.
Total sold so far: 3 on Amazon, 2 on B &N
Link to book on Amazon:Thin Hope

Princess Kiki Endicott faces two threats from one man. Royal General Patrick Maxwell says he's only pursuing peace, but his plan depends entirely on making himself the genetically enhanced, superhuman ruler of the known world. He wants Kiki to join him in near-immortality and become his wife--even though he's her uncle. In his desire for her, Maxwell tries to kill her lover Damon Stanza. Maxwell ends up in prison instead, and Damon takes his place as Royal General.

Now Maxwell has escaped and is marching on Kiki's city with a horde of genetically altered soldiers and magic users. It's going to take everything Kiki and Damon have to defeat Maxwell before he takes the kingdom--and Kiki herself.

Kiki fanned herself with her tank top as the temperature in the study climbed another few degrees. It suited her mood. Once again, Delainia’s forces had moved closer to the Keilaran border, and this time, their army was situated only fifty miles to the south of where she was sitting. Darren Storm wasn't reacting well to the trade ban her father, King Morris, had imposed on Delainia last month.
In the next room, her twin brother and sister, Ryan and Riley, argued over something. Their muffled voices floated through the walls and the tall bookshelves. Ryan had probably used one of Riley’s drawings for target practice by accident again. The last one, a nice drawing of the royal garden, now sported a big bullet hole right in the middle, thanks to the palace guards fetching him an easel instead of a cardboard bulls-eye. The yelling only served to up Kiki's tension more as she gripped the corner of the newspaper and fingered it with a sweaty hand.

Fifty miles. Fifty miles away from her family. Fifty miles from her boyfriend, Damon, and her. Kiki's desert eagles felt heavy in their holsters as the headline of the Keilaran Chronicle started to blur on the table in front of her. Possible War Looming, Delainian Forces on the Move. A photograph of the Delainian president, Darren Storm, stared out at her from below the text. He walked along the hallway of some lab, judging from the clinical hallways and the white coat he wore around his suit. Beside him stood his wife, Gracie, in an identical lab jacket. Both stared out at the camera with eyes that seemed blacker than normal somehow, Darren's from behind his glasses. Kiki wasn't surprised. Anything weird seemed possible in her neighboring country since their secret human experiments had started.

Sabrina's Comments:
I see a lot of potential for Thin Hope. It seems like a good premise that would be engaging. I would execute things differently. What follows are my suggestions and first impressions. Yes, it's nit-picky. I get to focus on less than 1,000 words while you had a whole novel to edit. :)

You are the author so no matter what I say, you get to decide how to present your book. OK, to the nitty-gritty . . .

The cover: It doesn't say fantasy/science fiction to me. I can see thriller since the gal is holding a gun. I can't think of a good reason to fade her into the city scape. If the model represents the main character, she should be solid. Fading her makes odd light patterns on her skin and clothes. The floating eye in the sky doesn't strike me as pertinent or well-placed. The iris color isn't so striking that it catches my eye. It is simply a floating orb that takes my attention from the main character who is faded out. I looked at the thumbnail of your book. The eye looks okay there but the main character is fuzzy. You can't tell she's holding a gun. All in all, I strongly recommend taking another look at your cover.

The blurb: You say there's two threats from one man but you don't spell out what those threats are. I caught that one threat is he's trying to marry her but he's her uncle but if the second threat you're talking about is the army invading, that is delineated as a later time so it doesn't feel like part of the two threats. I shouldn't have to put any analytical power into figuring out what you mean.

I suggest you use the "when" formula. When
Posted by Sabrina Sumsion at 4:37 AM