Anchored to the Flesh 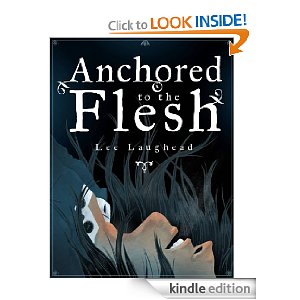 Silas is a wizard who travels from world to world searching for an artifact that will enable him to speak to his dead wife. When he and his friends Bottle and Kellikek find a good lead from the diviner Hargold Omenstop in the city of Sareb Forest Market, Silas is mistaken for the killer of the very man he sought.

"Anchored to the Flesh" is the story of Silas, bound to an oath of pacifism yet craving revenge, chasing after answers to the twin mysteries of the real killer and the fate of the only woman he ever loved. A gritty novel filled with frequent action, "Anchored" nonetheless explores Silas's psyche as he struggles to maintain his morality in a rotten world.

The first book in a planned trilogy.

Sustenega set the man on fire.

It was his own fault. He didn’t give Sustenega the information he needed, even though he gave himself away by twitching and sweating when asked where the diviner Hargold Omenstop was. He knew Omenstop lived in this city; it was just a matter of narrowing it down. Maybe, he thought, asking random peasants on the streets about an obviously infamous sorcerer was not the best way to locate him. But what else could he do? Every time he went to a tavern or inn for information, he ended up fighting someone, then fighting everyone, then burning the place down. He could break down some noble’s door and sweat him for information. Rich people usually had a higher opinion of themselves than the poor, and therefore would be more likely to give up Omenstop’s location to save his skin.

Sustenega looked disdainfully at the farmer he just set aflame. He had long since died, crumbled to the cobblestone street, mercifully not setting anything else on fire. He was so used to being feared and reviled that he didn’t even notice the crowds of merchants and shoppers that had panicked and fled the area after he attacked the poor peasant until he lifted up his head and glanced around. He walked to an empty fruit stall and helped himself to some red-and-orange fruit he didn’t recognize. He stuck a few in his pocket. And they were the only things in his pocket, because Sustenega saw no need to carry around mostly useless tools or weapons that could just be used against him anyway.

Sustenega heard the clamping of horse hoofs on the ground, coming toward him speedily. No need, he thought to himself, to stick around, kill a few town guards.


Vicki's Comments: The cover is well designed, however it looks sexual to me, especially coupled with the title. I'm not sure that's the look you're going for. Since this book is fantasy, I would look at some other fantasy books that are similar to yours and try to design a cover that has the same look. Since you mention Glen Cook and Joe Abercrombie in your description, I would start there. See if you can't get a cover to look like the same style, as their covers do seem to be similar.

This leads me into my next point. I find it off-putting when an author compares themselves to other well known authors. It's one thing if your readers make that comparison, but I feel as if an author should not do this. Let the description pull the reader in. I'd cut the first paragraph.

The next paragraph is confusing to me, possibly because of all the words I'm not familiar with. I probably would take out some of the names. For instance, you don't have to name the city.

I don't think it's a good idea to say it's the first book in a 'planned' trilogy. To me, this says the author is not actively writing the next book. I would take out the 'planned' part and just say, "Book 1 of the Such-and-Such Trilogy."

When I read the beginning of the novel I feel like trimming some of the words. I would suggest a critique group to help get rid of some of the superfluous words. There also were some editing issues. After running this through a critique group I would hire an editor. I like how it starts with a bang. Setting fire to someone definitely gets my attention. I think with a bit of tightening up, this book could do quite well.

What do you guys think?
Posted by Victorine at 11:28 AM