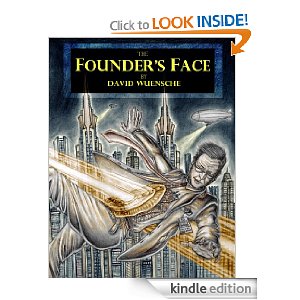 Approximately two hundred and fifty years into the future a nation simply known as The Union is the envy of the entire world. This particular utopia stands above every other state in terms of medicine, technology, and the sciences. And although it may seem perfect, it has a single and very flawed blemish that has haunted its populace for fifteen decades. A secretive vigilante religion known as "The Process Cult" has repeatedly killed individuals, both overtly criminal and seemingly benign, with a perfect rate of success. The method of murder, a nearly spontaneous full-body conflagration, still baffles forensic scientists and investigators.

Detectives Sali Ross and Gordon Pratt are assigned the go-nowhere job of hunting down the Process Cult membership. Although they are able to set traps for the cult's enforcer, the killer has slipped through their fingers over and over. When the killer targets the aide of high-ranking politician Ibram Glenn, the two officers are handed the unique opportunity to take the investigation in an entirely new direction. With the assistance of a computer scientist, a professor of law and philosophy, and a naturalist hunter with an outdated (and illegal) lifestyle, the team sets out to test the means and method of the murderous cult.

But is the cult really the source of the killings at all? How are they able to step so far outside the established bounds of known engineering and science? How can they finance such an elaborate operation? How can they maintain it in a surveillance and information-heavy society?

By the standards of the law, the standards by which most people judge how good or how bad a person they are, Ron Weiss was not a good person.  Until the age of twenty, Ron had not committed a single crime in his entire life.  He worked a maintenance job at the Hub City grav-chute that ran to the Beachside terminal and back.  He was sufficiently compensated for his work and lived in a sixth-ring apartment complex in the upper west quadrant.

At the age of twenty, however, Ron decided to surprise his girlfriend by stopping by her pad unannounced.  Their relationship had been strained of late and the young man determined that a little spontaneity might help patch things up.  He found her in a romantic tryst with a total stranger, the girlfriend apparently seeking a completely different kind of spontaneity.  The two had a heated argument that lasted hours and disturbed several of their neighbors. When the constabulary guard arrived at the residence to check on the lovers, they found the girlfriend dead and Ron holding the kitchen knife that he used to kill her.

Ron Weiss’ advocate argued to the citizen panel that this was a one-time act of passion and that they should be lenient with his sentencing.  The panel agreed and Ron was given a fifteen-year term in correction.  After only five years, Ron was moved to a minimum-security prison for good behavior.  Under the less-than-watchful eyes of its guards, Ron developed a familiarity with substance vices.  After an overdose, he killed a fellow inmate and his sentence was compounded to life internment.

But tonight Ron Weiss is free, but only to a limited degree.  Instead of spending his remaining days in a cell, he is now spending one night running.

Vicki's Comments: The book cover does give me a science fiction vibe, so I think that's good, but I'm not sure what's depicted on it, so it doesn't draw me in and make me want to know more. It looks like a guy is being lifted up into the air and a beam of light is bursting through him. I'm guessing this is depicting a scene from the book. I usually tell authors not to try depicting a particular scene, but rather give the reader an overall sense of the book. If it's a dark book, the cover should be a dark cover. If it's comedy, the cover should be light and fun. This particular picture on the cover doesn't make me want to know more. I'm also wondering about the type. Some of it is hard to read.

The description isn't bad. I like the premise of this book. I'd rather cut a little of the back story and get to the characters like the second paragraph. I'd also like to know the antagonist's name, instead of calling him "the killer."

I would trim the questions at the end, they don't do it for me. But I think with a bit of reworking the description can pack a good punch.

Unfortunately the beginning of the novel didn't grab me at all. It's all back story. I would trim off all of the back story and let us get to know these details as we get to know Ron as a character. As the book unfolds we can learn about his past. I think this book could be tightened up a bit. I suggest joining a critique group to tighten up the writing. I think this has a lot of potential.

Posted by Victorine at 3:55 PM