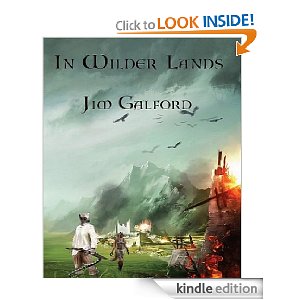 Author: Jim Galford
Genre: Epic Fantasy
How long it's been on sale: 5 weeks
Current price: $2.99
Marketing: Signed up on KindleBoards, Nookboards, GoodReads. Put up advertising campaign with GoodReads and Adwords. Distributed cards at local fantasy con.
Total sold so far: 17
Link to book on Amazon: In Wilder Lands (The Fall of Eldvar)

In the rough mountainous midlands of Eldvar, two city states have been waging a war that has lasted for generations. Desperate to bring an end to the war with themselves coming out on top, one city escalates the conflict through the use of dark magic, setting off the largest war the lands have ever seen as other forces are dragged in to defend their own homes from the ensuing violence.

Throughout this, the animal-like wildling Estin finds himself driven from the city that is the only home he has ever known. He must flee the relative shelter to escape the very forces that seek to continue the war and would willingly drag him into it with them.

Driven into the wilds, Estin has no choice but to put some degree of trust in those he would least expect to travel with: A fox wildling whose goals and motivations he often cannot even guess at, a dwarf who swore to murder him for money, and a mixed group of gypsies and other wildlings who have no stake in Estin’s survival.

Estin must decide what he is willing to do and become, as well as who to trust if he is to survive the war, once it reaches the wilder lands where he now must learn to live.

Whenever I dreamt, time seemed to lose its meaning, but the story remained the same. It would always start with that peaceful warm feeling that just seems to belong in any state of near-sleep. I could feel people close—my parents—while my mind was adrift. My mother would whisper to me as I lay there, telling me that she loved me. These are the things every mother tells her child, I’ve been told.

What made my dreams unique was where things went from there and how vividly I could remember them every time I woke. Dreams based on your own memories can be brutal like that. I could choose to ignore my own history while awake, but my dreams would never fail to remind me of every painful detail.

After a time—how long was debatable, as it felt like hours, but could have been mere minutes of sleep—I would feel my mother leave my side. I was aware of her departure, though I did not fully wake either in the dream or real life. She was gone for a while…too long in my childhood’s mind.

Each time I reached this point in the dream, I could feel a chill creep down my spine, knowing what was coming but unable to change it.

It was then that the screams would begin. Distant at first, but still clear. Voices I should have known, mixed with so many I do not remember anymore. They were probably my neighbors, maybe even the other young I played with, though the dream blurs so much and my own memory could not identify them. They have become nameless and faceless, which only makes their deaths that much more difficult for me to accept.

If I was lucky, this was all I would remember when I woke.

Estin woke, his heart pounding as it did nearly every morning. He shook as his limbs tried to run for a moment, the dream continuing into wakefulness. When he did finally free himself of its hold, he groaned and relaxed as best he could.

Vicki's Comments: I want to like this cover, however I'm not exactly sure what is going on in the picture, and it doesn't really scream High Fantasy to me. Are these pirates? Is that a boat on fire, or a tall mound of dirt? I'm afraid the cover is trying to portray a scene in the book which shouldn't be the main objective of a cover. It should portray the genre.

The text doesn't stand out from the background and the font choice isn't the best. I would revamp the cover and see if you can't get a High Fantasy feeling from it. Maybe look at some of the popular books that are similar to yours and see if you can't get the same type of design. (Obviously don't copy, but you can get ideas from the other book covers and do something similar.)

The description is a bit too wordy and I think it can be tightened up. For instance, "He must flee the relative shelter to escape the very forces that seek to continue the war and would willingly drag him into it with them." This sentence is awkward. You could easily trim it to make it smoother. I'm also not sure that the first paragraph is needed. I usually read a description to get an idea of the main character and their conflict. You don't get into this until the second paragraph. But some people like a little setting information, so get more opinions on that.

Unfortunately the beginning of the book doesn't grab me. I don't like book starting with dreams, and this one isn't really a dream but a character "telling" about a dream, which is worse. I don't get the first person to third person change. That confuses me. I also see some editing issues. I think this book needs some editing and tightening up, and perhaps a different beginning.

I recommend submitting chapters through critiquecircle.com and getting the prose tightened up, and then getting a good editor who can help with tense and grammar issues.

What do you guys think?
Posted by Victorine at 8:38 AM