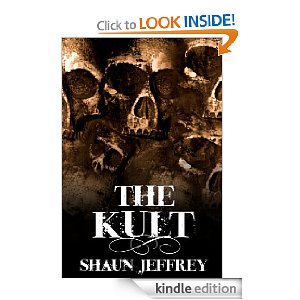 Author: Shaun Jeffrey
Genre: The author didn't list a genre, but I'm guessing it's horror or crime fiction.
How long it's been on sale: Previously published, but publisher went bankrupt. Re-released by me in March.

People are predictable. That’s what makes them easy to kill.

Detective Chief Inspector Prosper Snow is in charge of an investigation into a serial killer called The Oracle who turns his victims into macabre works of art. But Prosper harbours a dark secret of his own. He and his old school friends were members of a group called The Kult who made a pact to dish out their own form of vengeance on bullies. Now a member of the group puts their friendship to the test when he makes a far darker request: that they murder someone that raped his wife.

To get away with murder, the friends decide to blame it on The Oracle, but events take a chilling turn when the instigator turns up dead, his body fashioned into a disturbing work of art. Now, one by one, the members of The Kult are being hunted down.

Just when Prosper thinks things can’t get any worse, his wife is kidnapped and he knows that if he goes to his colleagues for help, he risks his dark deeds being unearthed. If he doesn't, he risks losing all that he holds dear.

People are predictable. That’s what makes them easy to kill.

At least that’s what the Oracle hoped. He had studied and plotted Jane Numan’s routine over the weeks. Watched without her seeing, making note of every nuance, every step of her schedule until he had a complete diary of her movements, probably knowing more about her than she did about herself.

He crouched in the recessed doorway of the kebab shop opposite where she lived and gripped the handle of the knife in the sheath inside his jacket. His weapon of choice, he hoped the mere sight of the blade would instil terror in his prey, making it more personal, and putting him close enough that he could smell his quarry and see the fear in her eyes.

Like clockwork, the front door of what to anyone else would be a nondescript house opened and Jane walked out. The Oracle sank back into the shadows as he stared at the facial disfigurement that made it appear half her face was melting. Although only 23 years of age, she probably hadn’t had the easiest of lives, which made her all the more desirable as a victim as the more public sympathy his kill received, the more publicity he would generate, and as people were fond of saying, there’s no such thing as bad publicity, especially not for what he had planned.

The Oracle watched her check that the door was locked, pushing once, twice, then a third time, as she always did when she left the house. His pulse increased, a volcano waiting to erupt within his chest. He rubbed the sweat coated fingers of his free hand down his trousers. Everything was going according to schedule.


Vicki's Comments: The image on the cover is fantastic for a horror novel. If that's the genre, it fits perfectly. I'm not sure I love the font, it doesn't go with the tone of the book to me. I would try to find one that is more of a clean font. I would switch it and see if that makes a difference.

I like the description except for the first two lines. Starting with those first two lines makes me think the description is written in the killer's point of view, but then we switch right away into the detective's point of view and it confuses me. If I ignore the first two sentences I feel like it flows better. Could it be improved? Sure, I think it could be tightened up just a little bit. I would ask my critique group for suggestions to tighten it up. But really, it hooks me, so I think it's good!

The writing is tight, and it starts in a great place. I think this book can do very well. It's possible the higher price is holding it back. Maybe try a sale for a while, just to get some eyeballs on the book. There's really not a lot holding this book back, in my opinion. Once it gets some publicity I think it will become a hit!

What do you guys think?
Posted by Victorine at 5:26 PM