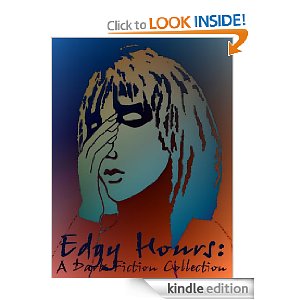 Author: Ederyn Khushrenada
Genre: Dark Fiction
How long it's been on sale: Feb 2011
Current price: $.99
Marketing: I mention it now and then at the MOA forum on Amazon; listed it on the blog of Mistress of the Dark Path and 1500 Authors; have a page for it on Goodreads; created a thread for it at Kindleboards
Total sold so far: 18
Link to book on Amazon: Edgy Hours

Horror doesn't need zombies or vampires; the most frightening animal in the universe is man. This anthology of five short stories explores the disturbing side of human nature:

Wire: A terrorist questions the ethics of his cause as he wires a small child with explosives for a suicide mission.

Always Mine: A secretary finds herself in an awkward position when her employer confesses his romantic interest.

Canvas: A farm boy from a close-knit family suffers nightmares while away from home for the first time.

Six Minutes: A condemned prisoner reviews the events that brought him here as he awaits execution for an accidental murder.

Not intended for young readers, some of these stories contain homosexual themes and possible triggering material if you're a trauma survivor. Reader discretion is advised.

This complete collection is also included in the anthology 'Blue Forest'
http://www.amazon.com/dp/B0057HCEVE

The last one had gone off without a hitch. Why did things have to f*** up today of all days, when the new so-called commander was here? Commander my ass. He's nothing but a squat walrus with a mustache and a power fixation. How much longer before they'd have to genuflect before this poor man's Kommissar? This was a small separatist faction, not a military superpower. They didn't need a damn commander. Commander or no, the bastard was the one who now claimed the title and no one was arguing with him, so Bodin wasn't about to make waves. He'd been trying for years to impress the people who mattered, so why the hell did everything have to go wrong the day his first opportunity for advancement came along?

Not that it'll make any difference, he reflected as he stripped the rubber coating from the tips of the wires and rolled the ends together. The only real advancement around here was a better bed to sleep in and a little more respect from the grunts than you'd normally get. Still, a decent bed was worth dying for, and lately he'd been waking up every morning with a backache from Hell. How did they expect him to do his job without mistakes when his back was killing him like this?

Camp commander. Ha! Talk about a Napoleonic complex. What was it Korać used to say? "Don't step on the runts; they go off." Yeah, that was it. Korać knew the lay of the land, which was more than he could say for this pinheaded dictator from Sarajevo. He was going to miss Korać. Korać had never called himself commander of anything, but everyone knew he was the boss. He simply commanded respect, and Bodin hadn't lost any respect for him when he died, unlike some of the guys. Anyone could have been ambushed like that—anyone. They all had to bite the bullet in the end, and Korać had died heroically as far as he was concerned.

Vicki's Comments: I think the cover is a real problem. It doesn't define the book for me, and I can't read the word "dark" at the bottom. I don't see an author's name on it, which is odd to me. The gradient of color makes the cover appear home made, which is definitely not the look you want to go for when trying to sell a book. I would suggest an overhaul of the cover.

Since this is a short story collection, I think boiling down the stories into succinct one liners is a good idea. The descriptions right now don't hook me, so I might suggest working on the descriptions. Let's just take the first one for example. "A terrorist questions the ethics of his cause as he wires a small child with explosives for a suicide mission." The main conflict in this story is the terrorist questioning the ethics of his cause. That's not very exciting for me. Someone questioning the ethics of something probably means a lot of internal dialogue. Does this stop him from his task? Does he let the boy go? The description doesn't say either, it just says he questions the ethics. So I'm thinking the story will be a bunch of monologue from one character thinking about ethics. If this accurately describes the story, then that's fine, but the problem might be in the story then rather than just the description. It doesn't grab me as a must read.


The writing in itself I think was fine, but I couldn't get a sense of the setting at all, and if this guy is strapping a bomb to a young kid, I would want to know this from the start. Unless that's the big reveal at the end. But for me, this story isn't hooking my interest. It's pretty much what I figured when I read the description. It's a monologue of a terrorist. I'm probably not the target audience for this book, though, so take what I say with a grain of salt.

What do you guys think?
Posted by Victorine at 4:11 PM