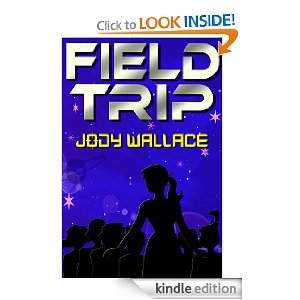 Author: Jody Wallace
Genre: Light SF
How long it's been on sale: May 30, 2011
Current price: $.99
Marketing: Professional cover, lots of tweets & FB comments, posts to my author website, copies or queries sent out for reviews (2 reviews received), current offer of a code to get the book free at Smashwords, posts on a couple of loops and forums I frequent (no driveby's!), author newsletter, updated website, a couple blog posts
Total sold so far: 16
Link to book on Amazon: Field Trip

Can a slightly cynical school teacher survive a field trip, an interdimensional incident and a handsome tour guide all at the same time?

A futuristic comedy of (little) terrors

Third grade teacher Hazel James has been escorting her students to the Space Station Freedom Museum and Amusement park on their annual field trip for years. Slightly dull years, all things considered, but well within the budget of the Integrated Public School System of Earth so she doesn't have to pay for the extras. This year, however, starts out with an ominous fizzle almost as soon as she and her batch of darling troublemakers enter the front door. The museum's shabby equipment malfunctions during the shuttle simulation. The children are having some issues with the whole paying attention business. And their usual tour guide has been replaced by a good-looking Zhie male--who's completely incompetent at his job.

Or is he? Miss James knows something is up at Space Station Freedom--whether due to budget cuts, poor management or one too many unruly student groups--but she has no idea what an unusual turn their annual field trip is about to take.

Geiger, the little piss-ant, sat behind me during the shuttle simulation and relentlessly kicked the back of my seat. He'd picked that seat because it was beside Clarice, not because it was behind me, his teacher, but that didn't stop him from kicking.

"This is how astronauts used to travel between planets," droned the Zhie tour guide. He was obviously not used to holding the attention of twenty Human and Zhie third graders from the Integrated Public School System of Earth on their annual field trip. We were only ten minutes into our day-long visit to The Space Station Freedom Museum and Amusement Park, and already the kids were restless.

"The early Humans didn't know about dimensional cross points." The guide, who'd introduced himself as Sergeant Chamblin, flicked his eyes from left to right, as if he were reading cues. His posture was as rigid as a post. "They used huge spacecrafts powered by dangerous fossil and nuclear fuels to propel themselves beyond Earth's orbit. The ships were nothing like the sleek hep...hep...oh, hoppers. Hoppers of contemporary times."

So maybe he was reading cues. Great. A newb. I resisted the urge to check the back of the room for any writing on the wall...of the cue or the ominous variety.

"Trips between planets took months instead of seconds," our newb explained, "and travelers were hindered by cramped living conditions, faulty gravity emitters, radiation, and, horror of, uh, horrors, space rations."

The folks in charge of writing the speech presumably thought they'd get a response out of the kids with that worn-out joke. And they did. A wad of gum flew across the room and stuck to the guide's podium, an incongruous green blip on the black and white logo of Galaxy Prime.

Behind me, Geiger snickered.

Vicki's Comments: Okay, first the cover. Just looking at the cover without reading the description it makes me think this is a middle grade book. It reminds me of The Magic School Bus. I think it's the cartoony type people combined with the young kids. I like the cover, I'm just afraid it's giving people the wrong impression.

The description is too wordy for me. I think it can be boiled down to a more succinct hook. From the whole long description here's what I got out of it: When third grade teacher, Hazel James, escorts her children to the Space Station Freedom something malfunctions during the shuttle simulation.

That's pretty much all I know happens. I would mention what unusual turn the field trip takes, unless that's a total spoiler.

The writing itself was good, although starting with a boring class might be a bit boring for the readers. If the field trip doesn't take a wrong turn soon, I might put the book down. But I haven't read on so I can't say if it gets exciting soon after the 300 words end.

I'm guessing the biggest issue with this is the description, followed by the cover giving the impression that it's a story geared toward kids. Although the reviews said they liked the cover, so I could be way off base with my assessment. Also, I noticed that there is some romance in the book but the cover doesn't portray that at all. Maybe putting the guy/girl on the cover might help?

11,000 words is a bit long to call it a short story, it's technically a novelette. Maybe labeling it a novelette will give it a little more appeal? My novelette is selling better than I thought it would.

What do you guys think?
Posted by Victorine at 3:43 PM