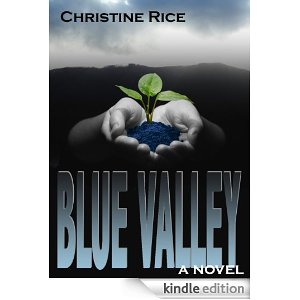 At the outset of World War 2, Will Leary is sent to California to investigate an agricultural anomaly; the soil is turning blue.

The War Department suspects Japanese sabotage, but Will discovers the unwitting culprit is Sarah, the town "witch" who has the uncanny ability to read the Earth's needs.

As the destruction spreads, and the food supply is threatened, it's not long before the farming community and the government are after Sarah. Will gives up everything he knows and loves to save her, only to find the very earth beneath their feet wants her dead.

--There are books that you breeze through and those that make you think. Blue Valley  is one of those books that forces the gears in your mind to turn. A moving story with the perfect balance of details, descriptions, relationship and battle.  - Doubleshot Reviews


The baby was wrong. Wrong in ways that brought up words like “unnatural” and “abomination”. Wrong in ways that made Kat wonder if she knew anything about the world. So wrong that she touched the hugeness of her belly to make sure her own baby had not dropped out of her, inexplicably, without labor pains.

But she was both relieved and sad that the baby lying in the dirt was not hers, because as frightening as this child was to the farm’s proprietor and the twenty pickers surrounding her, she was beautiful, somehow older than a newborn, fat and well-nourished, yet coated with dirt from her birth.

Benito, elbowed through the crowd. “Get back to picking, unless you think the child can join the line.” He pointed to Kat, “You help me. You’re not much good on this line today anyways.” He pulled his knife from his pocket, and Kat knew what he meant to do.

She glanced at her husband, Alphonse, whose bin of strawberries was nearly full, such was the speed at which he picked. He stood to his full six-four, “If she was available I’d say so.”

“She’ll get her day’s pay,” Benito said, standing between Kat and Alphonse.

I don’t want her touching that thing. Not while she’s carrying my son.”

“It’s okay,” she whispered, though no one heard. They had been hearing nothing but the baby’s cries; delicate, not demanding, more for attention than nutrition, since they had dug her from the ground.

At first, they thought the cries in the distance were from coyotes in the hills, then perhaps a trick of the wind, until one of the pickers suddenly yelped, and pointed to the rows below. Peeking from the ground inside a perfect circle of soil, was a baby’s face. The rest of the its body was trapped underground.

Vicki's Comments: I like the cover. It looks professional and makes me want to know more about the book. Without reading the description or the start of the novel, the cover tells me this is a book about something wrong with an area of land, maybe something spilled there and poisoned the people. It looks like a thriller because of the typography. After reading the description I see I'm not *too* far off, but I didn't get the witch/fantasy feeling from the cover at all. I think tweaking the cover to match the genre more might be in order.

I like the description. I'm a little unsure why the earth would want Sarah dead if she's the only person who can read it's needs. (The blurb makes me think that Sarah is turning the earth blue because that's what the earth needs.) That part confuses me a little, but I'm not sure it needs to be explained in the blurb. In fact, in order to save confusion it might be best to take that part out. Other than that, I felt the description was good and hooked me into wanting to read.

The first 300 words shows me this manuscript needs editing. I saw several errors that an editor should have caught and fixed. The idea of this is interesting, why is a baby found buried in the soil? (And why wasn't that in the blurb? A live healthy and yet unnatural baby found in soil kind of trumps blue soil to me.)

In conclusion, I'm guessing the major reason this isn't selling would be the errors found in the manuscript, followed by the cover portraying a thriller aspect while the blurb tells the potential buyer it's fantasy. If these things are fixed, I would expect this book to be selling much better. It's an interesting premise.

What do you guys think?
Posted by Victorine at 3:13 PM