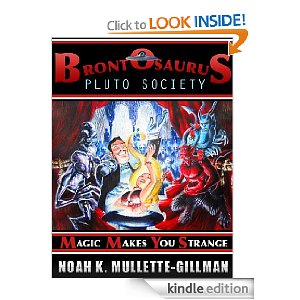 Author: Noah K. Mullette-Gillman
Genre: Fantasy/Sci-fi
How long it's been on sale: July 23rd
Current price: $2.99
Marketing: I did a radio interview, a lot of posting on Amazon.com and other sites. The book has gotten 8 really strong reviews so far.
Total sold so far: 35
Link to book on Amazon: The Brontosaurus Pluto Society: Magic Makes You Strange

A tale of dark science-fantasy.

In 1936 aliens from the planet Pluto descend upon London to learn the secret of stage magician Nevil Dever's latest trick.
They abduct the performer and his apprentice, Edward Whistman, on a flying saucer.
Once aboard the spaceship, Edward meets a devil
from the planet Venus. The two of them make their escape together
And Edward begins to learn about real magic.
He begins his journey into the strange...

“For my next trick, I will saw my hat in half and then pull a woman out of a rabbit.”

The great and powerful Nevil Dever stood incandescent and solitary upon the stage. A phantom and a devil, his crisp black clothes faded into the shadows and smoke behind him. His white shirt, perfectly starched ivory gloves, and ghostly pale skin almost appeared to float disembodied in the supernatural darkness.

The audience laughed together nervously.

The mysterious magician, the thin tall man with the fiery eyes, the kind smile, the sharp and pointed eyebrows, and the long nimble fingers threw his hat in the air. He didn’t even watch as it slowly fell to the ground with a loud thunk, cleanly cut into two even pieces.

“Well, that’s one. I’ll need a volunteer from the audience for part two?”

The audience gasped. They applauded. There weren’t any immediate volunteers among the high society women.

“Oh come now, none of you want to experience birth again? To come into this world fresh and clean from the belly of an innocent animal? Imagine how everything might change… Imagine how liberated you would feel… Imagine what it could be to be truly and finally wild…”

As he spoke, the illusionist had walked out into the audience. Many of the spectators lowered their faces out of fear that if they caught his gaze he would choose them. They were, after all, good Christian men and women. No decent person would ever consent to be reborn from the belly of an animal, like some pagan monster.

But the timbre of his voice had them all enthralled. It was such a deep and rich sound. He held light and darkness in his mouth.

From behind the stage, young Edward Whistman watched.

Vicki's Comments: When I critique a book I always look at the cover before anything else so I can get my first impressions of the book. I assume most people will be looking at your cover first. At first glance, this book cover looks well designed. I think it's the typography. However, I think there's too much going on with the picture and I quickly get a bit lost. I see demons first, then magic, and then what might be a robot. I can't quite tell. The elements don't seem to go together very well.

Book covers are hard because they do need to represent the book in a way, and yet their main purpose is to tell the reader at a glance what genre the book is. Unfortunately, this book cover doesn't give me a clue as to genre. The typography almost has a "Choose your own adventure" feel to it. The demons make me think of paranormal, the robot makes me think of science fiction. If the book crosses genres, that's fine, it's going to be a bit harder to sell, but I think you need to pick the main genre and do your best to portray that on the cover.

The description begins with: "A tale of dark science-fantasy." Here you're openly admitting you don't know which genre to put this in. I'd take this out. Honestly, since there are space ships and aliens, I would probably put this book into the science fiction realm, with paranormal as the sub-genre. But take that with a grain of salt because I haven't read the book.

I think the description needs to focus more on Edward Whistman. It seems like this is the main character. If this is the case, start with Edward and what key thing happens to him. Maybe: When Edward Whistman is kidnapped and taken on a spaceship, he (now describe the conflict and what Edward must do.)

The beginning of the novel was quite good, IMHO. It definitely caught my attention. You have a charismatic character that is doing something interesting, and I can feel the tension in the room as he is asking a high society lady to do something vulgar. However, I do feel distanced from the scene because there is no main character whose point of view we are in. The last sentence suggests we are in Edward's point of view. I would move that sentence up to the second sentence of the book. Then tell the scene from Edward's POV. Give us a little of his emotion as he's watching this. Is he laughing at the audience? Is he captivated by this magician? Or is he nervous because he has to go out on stage in a minute? See what I mean? I'd like to get to know the character, because ultimately the character is what is going to make me keep reading.

But as I said, I am intrigued by the snip, and if I had grabbed a sample I would read on to see how things progress.

I'm guessing this book is going to be a tough sell no matter what, just because it doesn't fit nicely in a genre package. The people who like reading about spaceships might want more science in the book. The demon thing might be a turn off for a lot of science fiction fans. The people who like paranormal might not necessarily like reading about spaceships. Fantasy fans might like some aspects, but prefer gnomes and elves.

Overall, I'd suggest a different cover and perhaps changing the name as someone else suggested on KB. The description can be tightened up, and hopefully those two things will help.

Posted by Victorine at 6:09 PM