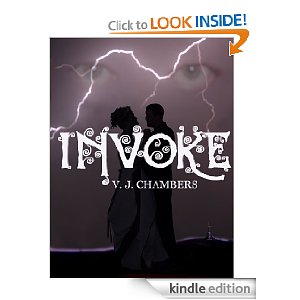 Author: V. J. Chambers
Genre: YA/New Adult Contemporary Fantasy
How long it's been on sale: 18 Months
Current price: $2.99
Marketing: Sent messages to my email list, put a blurb for it in the back of my better selling books, facebooked, twittered, blogged.
Total sold so far: 62
Link to book on Amazon: Invoke

I invoke Morgana of the nine circuits of time.

A routine exercise in the spirit realm goes wrong, leaving the students of the Academy, a haven for Sensitives who can communicate with spirits, assailed by dreams of wind-tossed fields, dully glinting armor, and galloping horses.

May the wheel spin again! May the clock wind backwards! May the old world live again!

Taken over by spirits of the legend of King Arthur, they struggle with loathsome romantic pairings, as their teacher beds one of her students, and a strong romance is ripped apart by magic.

Three deaths and then the charm is wound up.

When students begin to die, and their bodies disappear, the remaining Sensitives know they must fight against whatever evil has been unleashed in the Academy. But how can they fight when they are tangled up in swords, mists, and castles, and when their very essences are being ripped away from them by ancient spirits?

Wyn squished her forehead against the window pane in her bedroom. It was raining outside and the droplets of water were running in rivulets down the glass. Outside, it was gray and wet. She was watching Madame Braith lead a guy up the driveway and into the old mansion Wyn called home. Madame Braith and the guy splashed across the muddy pathway to the porch. Madame Braith held a magazine over her head. The guy just trudged forward with his head down.

Wyn couldn't really see what he looked like, but he had dark hair. It was long, at least to his shoulders. In the rain, it was pasted against his forehead. He looked pissed off, but that might have been because he was walking in a downpour.

Meaghan was excited. That was because Meaghan was beyond sexually frustrated, or so she said. She had been waiting for some new blood to come into the academy, and here it was. Reese Laird. Meaghan had been pretty obsessed with the idea of him ever since she heard his name.

"Did you get a good look at him?" Meaghan asked, wedging herself next to Wyn so that she could also look out the window.

"No," said Wyn. Reese and Madame Braith were already inside the house, so there was nothing else to see. Wyn moved away from the window and settled on her bed.

"How old do you think he is?" Meaghan asked, still peering through the glass as if she hoped he'd walk back outside.

Vicki's Comments: I like the people on the cover because it shows the romance, but they look to old for a YA book. (I'm not sure what New Adult means.) They also don't look contemporary, so it gives me a 'historical romance' feeling. The lightning and the eyes do give me a paranormal feeling, but since this is fantasy I'm thinking the cover isn't working. I'm also not a fan of the font. I would suggest a re-design of the cover.

I confess the description totally confused me. I think I get what you're trying to do, but for me it didn't work. In descriptions I like to find out who the main character is, and what is at stake for them. I think a major reworking of the description would help this book tremendously.

The beginning of the book isn't bad, but I do see some places where the writing could be tightened up. I counted 11 times you used the word 'was.' Some of them really stood out. There were also instances of telling instead of showing, for example: Meaghan was excited. I'd much rather come to that conclusion on my own, after observing her actions and words. Overall, I think the writing can be tightened up, but I think the book begins at a good place, and there were some things about the writing that I liked. I would put this through a critique group.

I'm guessing the main issue is the cover, but the description and writing both need a little love too. What do you guys think?
Posted by Victorine at 10:48 AM

Email ThisBlogThis!Share to TwitterShare to FacebookShare to Pinterest
Labels: YA Contemporary Fantasy