Zachary Pill, Of Monsters and Magic 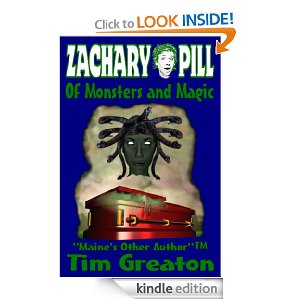 Author: Tim Greaton
Genre: Young Adult - Fantasy
How long it's been on sale: 2 months
Current price: Free
Marketing: Twitter and Facebook notifications; Free on Amazon (and through Smashwords affiliates); updated cover and description.
Total sold so far: None. Given away 472 ebooks.
Link to book on Amazon: Zachary Pill, Of Monsters and Magic (The Zachary Pill series - book 1 in the boy wizard dragon epic fantasy)

I'm humbled that you've considered the Zachary Pill series. Though more than 80,000 of my novels have been downloaded in the last few months, it's not sales that motivate me to keep writing. It's, instead, a crappy childhood.

No matter how much I got bullied, no matter how loud my parents fought, and no matter even if the police arrived at our door in the middle of the night...I learned to cope by escaping into books--mostly fantasy books. Not only did those stories allow me to forget how miserable things were, for at least a while, those heroes also taught me how to stand up to childhood bullies and to get away from the insanity at my house whenever I could. I even wound up having a few real life adventures. Though what I went through back then was terrible, in some ways I'm lucky to have experienced that life. It taught me how NOT to live when I grew up.

If you do enter the world "Of Monsters and Magic," I hope that Robin the beautiful readhaired thief, Bret the werewolf and Zachary Pill the world's first wizard/dragon will provide both entertainment and friendship. If my stories can provide even a few moments of escape during times of need, I will have succeeded.


The five-star reviews for the Zachary Pill wizard dragon series are piling up...

Patrick Jones says, “This book is really FANTASTIC and it’s written with such a unique writing style.”

A.J. Grady, author of “Proof of God: An Ontological Adventure” declares, “It’s seldom you see fantasy written with such verve and panache.”

Edwin Stark, author of “Echo Station One,” “Cuentos,” and other novels has this to say: “…this book is greatly recommended… and it will get you more bang to your book at any price.”

(These reviews are all posted on Amazon and refer to the complete trilogy.)

Getting beat up by three boys is bad enough, but when a swarm of bats invade his Boston apartment, Zachary Pill's father disappears and his world spins out of control. After being forced to move to New Hampshire, he soon learns that cleaning Madame Kloochie's filthy house is the least of his problems. When the evil wizard Krage sends monsters to find him, Zachary has to find a way to defend himself and and his friends...and so begins his journey into the dangerous world of his family's magic.

Wishing that magic really did exist, Zachary Pill kept smashing the Billy Timkin voodoo doll he had made from a white hand towel until its blue toothpaste eyes and mouth were smudged beyond recognition. When the bar of soap fell out of the Billy doll’s head, he glanced up at the mirror to see his bruised cheek and swollen lip.

“I never did anything to him,” he muttered.

He made a fist and debated whether to put the doll back together again and give it another good couple of whacks.

He pulled up his tee-shirt sleeve up and made a muscle, but the pathetic little rise at the top of his arm depressed him. He sighed and let his arms drop back to his sides. No way would his uncle let someone get away with what Billy had done to him. Anyone that touched Uncle Ned would have been the one with bruises―or worse.

Disgusted, Zachary ran a wet comb through his offensive hair and managed to push a few stray cowlicks back where they belonged. He smacked the comb against his skull. Why did his hair have to be such a weird color!

“What hair?” a voice asked from the open bathroom doorway.

“That’s what Billy Timkin called me yesterday, just before he started hitting me.”

“Maybe you heard it wrong.”

“I told him to shut up, so he punched me.” He left out the part about trying to punch Billy back―twice. Half the students in the cafeteria had laughed when he missed both times. By today, the whole school would...

Comments: I'm going to temporarily change my blog name to "Why can't I give this book away?" because that's what we've got here today. A free book. So, let's examine why this free book isn't being downloaded in the thousands, because I had a book go free and gave away 45,000 books in five days. And that was a children's book.

Let's take a peek at the cover first. When I look at the cover it says "Middle Grade Fantasy" to me. I do not like the green font on the blue background, but other than that I would say it's not a horrible cover for middle grade. It does however look like it was made in the 1980's. The author says this is a young adult novel meaning it should appeal to kids between 12 and 18. Now, the writing suggests to me that main character is younger than that age range, so I'm thinking this book might actually be a middle grade book. In that case, there is our first problem. The author is trying to sell this book to young adults, when he's actually written a middle grade novel. My suggestion would be to embrace the middle grade, and maybe tweak the cover so it has a fresh 'today' look to it.

The description is way too long in my opinion. I see that wall of text and my head starts to hurt. I want to skip it and go on to the next book. I see it starts with a letter to the reader, and it gives the reader very personal and disturbing information about the author. I'm very sorry the author had a horrible childhood, and bullying and abuse are terrible but that's not something to tell a potential customer. Cut the letter to the reader.

Finally we come to the book description. I'm finding some "movie guy voice" moments in the description. Things that are highly dramatic and yet don't tell the reader anything. Like, "his world spins out of control," and "is the least of his problems." These are not helpful to someone trying to figure out what the book is about. I'm also getting confused a bit. His father disappears the night there are bats in the apartment? What do bats have to do with disappearing people? I would highly recommend re-working the description.

The writing isn't bad although I prefer to get more of a feel for a person's surroundings. I didn't know he was in a bathroom until his father stood in the bathroom doorway. And I thought he was at school. I wondered where he got a wet comb from. But overall I didn't feel like the writing needed a lot of work.

My suggestion is to update the cover and work on the blurb.

One more little thing. When a book used to go free, it would get a lot of attention. Lots of blogs would mention it, and the book would get a lot of downloads. This is no longer the case. A writer needs to submit a free book to all the blogs, and they choose which books to feature because there are so many free books. I suggest studying how to successfully have a free promotion by reading this article. It's slightly outdated, but still has good advice. Most of the time short free promotions work the best.

What do you guys think?
Posted by Victorine at 8:08 AM