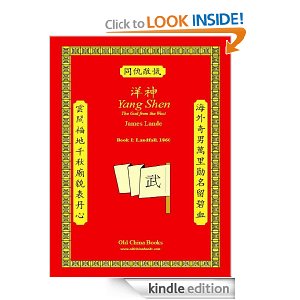 Into the midst of China's maelstrom came an American adventurer leading a ragtag army in defense of empire - a man from the West grateful Chinese made into a god, a "yang shen."

Yang Shen tells a story of the encounter, sometimes the clash, of Americans and Chinese. Based closely on primary and secondary source material from both the Chinese and Western record, Yang Shen draws on the work of hundreds of scholars of late imperial China whose insights inspired much of the story's abundant detail.

More than a historical adventure, Yang Shen recreates times long past, places long lost in China, and long-silent voices of people in America, China, and England who lived through cataclysmic events that echo still.

(In the middle of things…)

She was a weathered old Ningpo trader prowling in the China Sea, scudding over ocean the color of dried blood. Her grimy deck stretched aft eighty feet, from a low stem to a high, turret-like deckhouse perched above the stern. Bright blue eyes bulged under her bluff prow – one eye grafted to each side so she could find her way when her feckless pilots could not. Each huge oculus, hand-carved from camphor wood, had a stark white iris midst its lustrous blue orb. Her stern was painted blue with red facings – but without the lawful inscription for port of registry. A black-bordered red flag flew atop the tallest of her three ancient masts, and she displayed the rare extravagance of hand-carved teak railings. In the twilight, the junk's brown and yellow sails, tall and slender rectangles of woven rattan matting and bamboo battens, were silhouetted black against the orange afterglow of the sunset.

Two days earlier, she had slaughtered the passengers and crew of a lorcha in Blackwall Pass, west of Chushan Island, and now she thirsted for the blood of an American clipper ship departing Ningpo for Shanghai.

“晚上要小心 have a small heart tonight – be careful,” said the lodaai 老大 – the old-great, the junk master. “I smell seaweed rotting on rocks above the tide, over here, and over there I hear the crashing of surf.” He leaned out over the bow and whispered to the junk. “We are in dangerous water, and the sky will soon be black. Do you see what we search for? Look hard.”

Comments: I honestly am not up on my Chinese Historical Fiction, so please take everything I say with a grain of salt. The cover looks very homemade to me. It doesn't say historical, although I do get the Chinese from it. It looks very much like a do-it-yourself cover, which to me looks amateurish and suggests the writing will be that way as well. I would suggest hiring a cover artist.

The description starts with a history lesson. Not a good start, in my opinion. I would start with the main character. The best descriptions I've read have captured a character and their voice in just a few short lines. I want to know who the book is about, and why I should care about them.

The beginning of the book didn't hook me. I got confused by the Chinese characters, too. Why not translate it? I'm not sure why there were some stuck in there. I would maybe get more opinions on the opening of the book, maybe join a critique group.

I would suggest hiring a cover artist, and working with the blurb. Maybe get more opinions on the opening, because as I said this genre is not what I read so I may be totally off on my opinion. What do you guys think?
Posted by Victorine at 12:26 PM