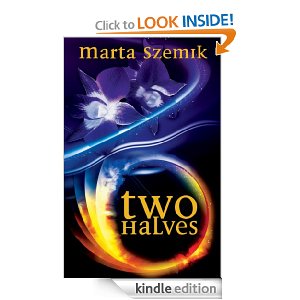 Twenty-one-year-old Sarah is a child of a human mother and a vampire father and has suppressed her dark side with serums. The only memory of her mother is when Sarah killed her, soon after birth. Of her father, nothing—just a hatred for his vampire traits that made her kill her own mother.

When a disturbing nightmare foretelling her bleak future stirs the superhuman traits, underworld creatures are beaconed. On the run with William, a man she knows from her dreams, Sarah tries to learn what’s been hidden from her, for a good reason. Had she known her destiny, she may have continued with the serums that kept her hidden.

Hundreds of miles—that’s how far I ran, each day. My feet should have been blistered, but they weren’t human feet. I should have been out of breath, but I didn’t need to breathe. I was tired, but not from the running; that was impossible. Thoughts whirled constantly through my mind: Where should I run next? What would be the best way to mislead the seekers? I carried a map in my head of where I’d been. Black marked the roads I’d passed; red for those I had to avoid; green for those I could still use. And that was what tired me. But this was the only constant in my life. This was my life, and would be for a long time. Running.

I covered any tracks that could lead the seekers home and laid false trails to confuse them, to keep them away from my family. Twelve months had passed since my wife died, twelve months since Sarah was born. I longed to see her, but couldn’t risk it. She had to remain hidden. I kept running.

I headed northwest at first, then northeast, then back northwest toward the opposite coast, zigzagging across America, away from the demon world. They would think I returned to my kind and stop the chase—or so I hoped.

It was summer, the days were at their longest, complicating my travel. If I could last until September, I knew I'd be safe again, traveling farther through the longer nights, spending less time avoiding daylight. Now, when the skies were clear, I hid in the shadows of dense forests, dark alleys, and low bridges, I hunted at night, feeding on any mammals I caught-except humans, that is. This was the new me. I'd been a cold-blooded vampire since 1823,  but now my judgment clear, I was newly compassionate.

The description isn't bad, in my opinion, but I think it could be better. I'm a bit confused about why a disturbing nightmare stirs her superhuman traits, and why it beacons underworld creatures. However, I don't normally read this genre, so maybe I'm just uninformed. I'd get the opinions of some other ubran fantasy authors.

The beginning of the novel is back story. I would much rather begin with what he is doing right now, not what he has been doing in the past. Start us with action, and give us little bits of back story along the way. That way there's a bit of a mystery, something for us to discover. Maybe start with him turning up his collar so no one can see his face, and ducking into alleyways. He could pull out a photo of his daughter, trace her face, then put the picture back in his pocket. This leaves the reader with a question. Why is he doing this? As it is, we are just getting back story and not getting to know the character.

So for me, the strongest part of this is the description, but I think it can be better. I would re-do the cover and re-work the beginning of the novel to have a better hook. Just my opinion. What do you guys think?
Posted by Victorine at 9:01 AM