All The Colors: a novel about Thailand and the search for life beyond Corporate America 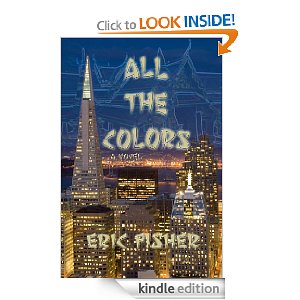 Author: Eric Fisher
Genre: Literary Fiction
How long it's been on sale: Dec 2011
Current price: $.99
Marketing: Facebook, Twitter, KDP Select Free, banner ad on Thai themed website
Total sold so far: 40
Link to book on Amazon: All The Colors: a novel about Thailand and the search for life beyond Corporate America

Charlie works for a San Francisco money management outfit that's got billion dollar accounts and a penthouse suite, but he's nowhere near the top. Long hours, big egos, and a skimpy entry level wage... It's him against the big shots who want to keep him down so they can climb the company ladder. Surely there's more to life than this.

When a friend who plays by his own set of rules suggests a trip to Thailand Charlie suspects that this is just the opportunity that he's been waiting for, but if he thought office politics were hard to understand, just wait until he throws Bangkok and Pattaya into the mix. Now he's got to reconcile points of view from Thai prostitutes, expats, high society debutantes, capitalists, socialists, and overbearing bosses. Everyone warns him not to fall in love, not to lose the plot and stick to his corporate career if he wants to succeed, but after he's seen Siam, there's no going back to the life he knew before.

What Charlie wanted to do was pass the test. Jam those calculations in his head and climb up a rung or two on the corporate ladder. The Chartered Financial Analyst (CFA) exam was no joke. Less than half who take the test pass all three levels and this was only the first. There was a ton of information to remember. Entire books that you needed to read about statistics, ethics, quantitative formulas, corporate finance and a bunch of other stuff. This all had to be recalled during the limited time they gave you to sit for the exam. Everyone at his work was “strongly encouraged” to take these tests, which increased the pressure. But if you passed all three levels you could break from the crowd. You could get a better job, one that paid well like managing money. Perhaps best of all, you could tell the guys sitting up on the throne to flush their own shit for a change. It was a worthy pursuit.

He could hear his neighbor singing in stiletto spiked bursts of incompetence through the paper thin walls. The chair kept rolling into his desk due to the slant in his apartment’s uneven floor, and his leg felt numb from the way he had to sit scrunched up against it as he read the book. Most of its pages were crisp and glossy from having never been thumbed through. He put in earplugs, placed a pillow under his butt and continued reading. He’d memorized the formula for Standard Deviation, but the Sharpe Ratio kept coming out wrong. The quantitative stuff was not sticking. Could it be a problem with his sciatic nerve? He palpitated his gluteus and felt a shock shoot down his leg. He stopped doing that. The tingling sensation, right above his right knee, was one of the first things he noticed when the doctors took him off the pain meds. Neuropathy, they called it. They’d done an EMG and when that didn’t point to the cause they did an MRI, that awful… walled-in machine with its jarring knocking sounds. The result was inconclusive, so he lived with it.

Vicki's Comments: First, a cavat. I don't often read literary fiction. I might be totally off base with my assessment here, so take this with that in mind.

The title is the first thing that caught my attention, and not in a good way I'm afraid. In my opinion, the title should not explain what the novel is about. The title should stand on its own, and be able to hook the reader into wanting to know more about the book. The description should then make it clear what the book is about. Having to say: "a novel about Thailand and the search for life beyond Corporate America" in the title is an immediate turn off for me. It also isn't capitalized correctly, so that gave me a bad feeling about the book as well. I would take that part out and just title it "All the Colors."

I would probably redesign the cover. I think it needs a more professional look. At the very least, I would put a new font on it.

The description isn't bad, but I think it could be tightened up. I am not seeing the conflict. I don't see why he is pulled toward Thailand. What's listed in the description - prostitutes, expats, high society debutantes, capitalists, socialists, and overbearing bosses don't make me think good things. This doesn't explain why he is wanting to leave corporate America. Give the reader more conflict.

The beginning starts with back story and explanation. This immediately makes me want to put the book down. Sorry. I would definitely cut the first paragraph. The second isn't terrible, but still gives me the feeling that it could be tightened up. I might try submitting the first chapter to a critique group to get some other eyes on it.

What do you guys think?
Posted by Victorine at 9:17 AM