Christmas Inc: What Happens When Wall Street Takes on Christmas? 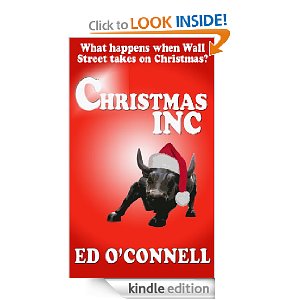 What happens when Christmas is acquired by a notorious Wall Street private equity firm?

Corporate restructuring and micro-management come to the North Pole: with hilarious results!

This is a short story of approximately 24 pages.

The four-storey Christmas building was centred around a vast atrium, in which grew an almost-as-vast fir tree, sparkling with candles that never seemed to burn out, and toys, bows and baubles of every colour imaginable. Around the periphery of the building, workshops of different sizes bustled with a moving rainbow of workers dressed in blues and greens, yellows and reds, purples and gold. At first, the Scruge Group contingent had though this a clever way of distinguishing workers of different departments for performance management purposes. When they found out that no such policy existed they were simply confused.

Santa packed the last of his things into the flimsy cardboard box the HR consultant had provided to him. Two thousand one hundred and eleven years on the job, and they wouldn’t even let him keep the sack, never mind the red suit. He looked down sadly, pulling at the pockets of the tailor-made Italian wool suit that the third Mrs Claus had ordered for him; no doubt she’d foreseen this moment, while the others had swallowed the promise that there’d be no changes to key personnel.

“Ho, ho, ho indeed,” he muttered to himself, drawing an exasperated “what?” from the new Head of Company Security, who’d been posted at his door to escort him from the premises.

He ignored the thick-necked man leaning in the doorway and sat in his chair for one last time. He leaned back and surveyed his office for the last time, shaking his head. It was so peaceful in here; he felt as if he was sitting outside, with all the space in the world. Two thousand one hundred and eleven years, he thought. It was a lifetime really. What would he do now? Help Mrs. Claus with her charity luncheons? Golf? He didn’t have to worry about money, at least; his ten percent stake in the business meant that he’d netted a small fortune from the sale. For him, the money just gave rise to another question: what would he do with it?

No one had thought for a moment that they’d get rid of Santa, and so unceremoniously at that. He’d been summoned to that sharp woman’s office, a lively workshop until so recently, now just another dull grey bastion of corporate tedium. He had looked incredulously at the empty walls, with a sense that the life had started to seep from the place.

Vicki's Comments: I'm not in love with the cover. I understand the bull with the hat, and the concept is kind of cute, but I don't like the gradient background. I think that's hurting the cover. If you want to stick with the bull/hat idea, I would find a picture and not crop around the bull. Just put the hat on him. The manufactured background isn't good. The font isn't horrible, but I think it could be better. I'd work on that too.

The description isn't bad, but I'm not connecting to anyone. Is there a main character? I'd probably mention them in the description. Is this from Santa's POV? That would be good to know.

I don't like the excerpt in the description. I would cut it. It also doesn't help that there is a typo. (Though - Thought)

The writing could be tightened up. For instance, "...doorway and sat in his chair for one last time. He leaned back and surveyed his office for the last time..." The repeat of 'last time' jars me as I'm reading. I don't think there's a lot to tighten up, though, so maybe just giving it to a few beta readers (other writers) would tighten it up enough.

I think with a new cover and improved description this could be selling better. What do you guys think?
Posted by Victorine at 6:03 PM