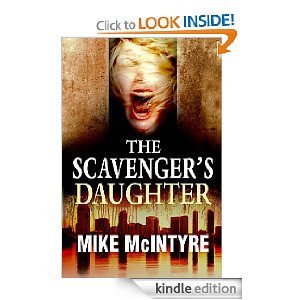 Tyler West, suspended Pulitzer Prize-winning reporter from the San Diego Sun, is desperate for a scoop that will save his career. Defying a spiteful publisher and a vindictive homicide detective, he investigates the baffling deaths of several of San Diego's powerful, rich and famous. Police call the murders unrelated, but Ty uncovers a common link: torture devices last used during the Dark Ages, including the Iron Maiden, the Pear of Anguish, and the most sinister of all--the Scavenger's Daughter.

Ty is plunged into a mysterious world of medieval torture scholars, antiquities collectors, museum curators, and sadomasochists. Aided by photojournalist Melina "Mel" Koric, a former Bosnian War refugee, he must break the brilliantly conceived series of slayings that has cast a dark shadow over a city better known for its sun, sand and surf. The elusive killer goes by the name Friar Tom, in tribute to his hero, Tomás de Torquemada, the first Grand Inquisitor of the Spanish Inquisition. As Ty scrambles to unmask the monstrous zealot, he pursues his lost love, Jordan Sinclair, an assistant district attorney and single mom. With the city caught in an escalating nightmare of medieval mayhem, Ty is drawn into a lethal game of cat and mouse that could cost him everything.


Candles flickered inside his self-storage unit. Santa Claus tapers, Easter Bunny pillars, Valentine votives, Halloween jack-o’-lantern tealights, a Rugrats menorah. He’d paid fifty cents for a crate of holiday candles on eBay after he was the only bidder to spot the misspelled listing: candells. He saved where he could. His was an expensive hobby.

Unit 67 was the size of an auto repair shop, the largest for rent at Sea Breeze Mini-Storage. The terraced complex of concrete buildings hugged the hillside above the I-5 freeway. A battered sign—24-HOUR ACCESS, YOU KEEP THE KEY—dangled from the sagging chain-link fence. The neighborhood of taxi garages, shabby apartments and weedy sidewalks was miles from San Diego’s palm-lined beaches. A pimple on the shoulder of America’s Finest City.

His drive-up unit was in the top row, its back wall embedded in the steep hill. Shamu, SeaWorld’s star killer whale, winked at motorists from a billboard towering above.

Most of the storage units held the furniture, dishes and clothing of the newly divorced and sailors at sea. Others contained sports equipment, camping gear, boats and RVs.

It was noon. He heard a jet pass overhead on final approach to Lindbergh Field. More pasty tourists had come to squeeze through turnstiles at the San Diego Zoo, splash in the surf and soak up the Southern California sun.

They could keep it all. He liked to play indoors.

“Dark theaters are prepared for dark deeds,” he intoned, quoting the motto etched on European torture chamber walls during the Middle Ages.

He popped a CD into the boombox—A Collection of Gregorian Chants. The medieval music filled the room, melting the tension in his neck.

Vicki's Comments: I like the cover, although it makes me lean more toward horror than mystery/thriller. But after reading the description of the book, I imagine the cover goes quite well with the book. My only concern would be that the cover is giving the reader the wrong impression when they glance at it, and I'm not sure it's working to draw in the people that love mysteries and thrillers. Before changing it, I would get more opinions on it, though, because I really do like it.

The description is good. I think it does a good job with drawing the reader in, and making them want to read more. We'll see what others say, but for me it was a 'win.'

For me, the beginning of the book was the weakest link. I thought the humor of the cheap misspelled candles from ebay didn't go with the vibe of the psychopath. I also felt like the writing could be tightened up a bit. My biggest suggestion here would be to get a few critiques and tighten up the beginning of the book. If I were reading this sample, I would not buy the book.

What do you guys think?
Posted by Victorine at 6:12 PM