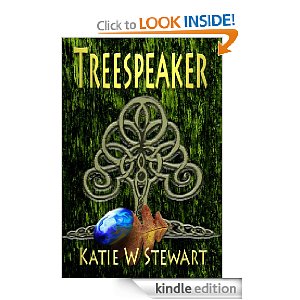 Jakan, Treespeaker of the Fifth Tribe of Arrakesh, knows from the visions he received at the SpringSpeak, that the stranger who has just arrived in his village is not the innocent, interested visitor he claims to be. As the villagers succumb to the mind-bending sorcery of the man, Jakan becomes more and more desperate to be rid of him. But when he accuses the stranger of an act of sacrilege, events take a sinister turn and it is Jakan himself who is expelled from the forest.

Sent on a journey across the treeless land outside the forest, Jakan finds himself fighting for survival – for his people and himself. Somehow he must find a man he hasn’t seen for twenty years, but as a Treespeaker —bound in spirit to the forest — his life hangs by a tenuous thread which grows ever thinner.

Meanwhile, his son, Dovan, must find the strength to carry out the new role he has been given while his father is away, for who knows if the Treespeaker will ever return?

This is not a book about good versus evil. It is a book about belonging, balance and belief. It's an adult fantasy, but suitable for anyone 12+

The worried face of the moon, high in the branches of the great oak, mirrored the apprehension in Jakan’s mind.  He shuddered and pulled his deerskin cloak closer about his shoulders. It made no difference. The cold he felt had nothing to do with the night air.

Ahead of him, a column of men, women and children trod their way up the moonlit path in solemn silence. The only sound came from their soft shoes amongst the leaves and the scuffling of small animals hurrying away to hide in the darkness. A thin mist settled on the ground, swirling in the torchlight and the scent of damp earth wafted on the breeze.

Gritting his teeth, Jakan tried to centre his mind on the ritual to come. At the front of the procession, frail Kattanbek, Chief Elder of the Fifth Tribe of Arrakesh, swayed in a sedan chair. Beyond him, further up the hill, three fires burned in the glade in front of Padhag Klen, promising the villagers warmth and light as they attended the SpringSpeak.

Jakan fixed his gaze on the sedan chair and sighed to himself. He had little doubt that this would be the last Speak for Kattanbek. The old man’s poor, tired soul would not last another season. Who would succeed him? It was a question that had plagued Jakan for many months now. Amongst all the Elders, there was no one who he could discern had the strength, determination or leadership that had characterised Kattan. The tribe had run smoothly under his care, without ill will or strife. Jakan hoped that tonight Arrakesh would name a successor, for he alone could know the true heart of his people.

As the procession entered the glade, the sedan was set upon flat ground between two of the big fires. Jakan pushed back the hood of his cloak to rest on his shoulders and stood beside the Chief Elder. The other villagers edged around the fires and faced Padhag Klen, The Tree, a huge, dark shadow in the firelight. The moon peeked between the still-bare branches, lending a silver glow to one side of the gnarled trunk.

Vicki's Comments: I'm felling like the cover is holding this book back. I do get a 'fantasy' feel from it, but when I compare it to some of the other covers out there I feel like it needs a little polish. I'd like to compare it to K.C. May's fantasy covers:

Let's look at the typography. The type on K.C.'s books are clear and clean looking. I think the font on Treespeaker isn't as professional. That's a pretty easy fix. I'd look for a font that is more like what you'd see on George R.R. Martin books. I think a serif font like that looks better.

Next, the background. In comparison, the Treespeaker background is very busy and almost screams 'look at me' more than anything else. In thumbnail, you hardly notice the background of K.C. May's books. When you examine them, however, you see the map. Maps are a very typical fantasy thing, so I think that's perfect for a background. And it's understated. Perfect.

Finally, the picture on the book. The tree symbol does give me the fantasy feeling, but I'm not sure what the blue thing at the bottom of the page is. The Kinshield pendant is something I see a lot on fantasy books. The sword is fantastic because it promises conflict and action right on the cover. I think the tree could work because of the stylistic way it's done, if it were done against a different background. I probably would take off the leaf and blue thing at the bottom. I also wouldn't rule out a different symbol or even a person on the front.

The description is pretty good, but I did get a little lost with the unfamiliar words. I might take out a few of the unknown words. For example, you could say: "Jakan knows from the visions he received that the stranger who has just arrived in his village is not the innocent, interested visitor he claims to be." I also think there are some things that can be trimmed in the description. For instance, "Sent on a journey across the treeless land outside the forest," - the 'outside the forest' isn't needed, as you already said he was expelled from the forest.

I found the story well written. It's a slow beginning, but it does catch my interest. The scene is well described and I am wondering who, if anyone, is going to be named the successor. I really don't think the writing itself is holding this book back.

My best guess is that the cover is the major culprit. If you can change the cover, make it look more like some of the other well-selling fantasy novels, I think that will be a huge improvement. And maybe ask opinions on the blurb.

What do you guys think?
Posted by Victorine at 9:10 PM