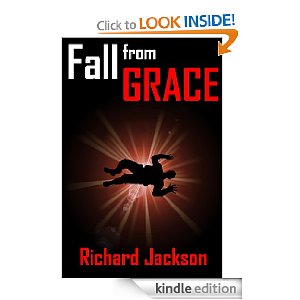 Author: Richard Jackson
Genre: Science Fiction
How long it's been on sale: Over a year
Current price: $2.99
Marketing: A giveaway, two paid sponsorships, and a few guest blog posts. Not much else. I've been focusing on writing.
Total sold so far: Around 40 copies, given away close to 350
Link to book on Amazon: Fall from Grace

As a Caster, Tyler uses cybernetic implants to broadcast his emotions and experiences to the viewers at home. He is living a life of action and adventure--until he loses his job. Now he must hustle illegal broadcasts and take odd jobs to survive.

When his agent is killed, Tyler is framed for the crime. With his only allies--an ex-cop turned criminal and a bartending medical student--Tyler is plunged into the middle of a mystery and comes face to face with the darker side of the broadcasting industry. Tyler soon learns there is much more for him to lose...and much farther to fall.

This book is approximately 180 pages.

It took all of Tyler’s willpower to stop himself from dancing a jig.

Manny offered Tyler a smile, one reserved only for someone who could make him money. “I know it’s been a while since you last worked. How are your implants?” the agent asked.

Tyler nodded. “They’re fine,” Manny probably knew what the answer to that question would be.

“And your training?” he asked.

“I’ve been sticking to my diet and exercise plan. I also keep busy so my skills don’t get rusty.”

“Good,” Manny said. The agent reached into his suit pocket for his notebook. He turned the page in the journal and started to rattle off details about the job as he jotted down some notes.

Tyler only half heard what his agent was saying. He had waited a long time to get back into the business after his show was cancelled and he was blacklisted. He could finally have his life back. No more busting his ass as a bar back or hustling quasi-legal castings.

Tyler’s moment of happiness was shattered along with the frosted glass door to Manny’s office. The invader filling the doorway was trouble. He held a strange looking device that resembled something out of an old Buck Rogers or Flash Gordon movie serial. Tyler threw himself down and to the side just as the dig man pulled the trigger of his ray gun.

There was no beam of light or anything Tyler could see. He felt the wave of heat and intolerable pain during the brief time he was in the thing’s line of fire.

Manny didn’t have the benefit of Tyler’s reflexes. The beam caught him full on. He shrieked like a lobster being dumped into a pot of boiling water.

Vicki's Comments: The author sent a possible replacement cover, so I thought I would post it here and get all of your reactions on it: 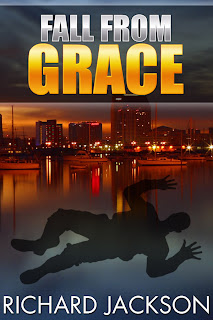 I kind of like the current cover, but when I try to guess the genre I don't get "Science Fiction." It feels more like a thriller to me, which actually gets stronger when I look at the proposed new cover. The city scape is definitely a common thriller icon. Between the two covers, I do like the new one the best, but again, I don't think it necessarily fits this book. I would look at something with a little more science flair to it. It doesn't have to be a planet, maybe something that looks computer generated. KC May's Venom of Vipers comes to mind. That says Sci-Fi to me, without being about space travel.

I actually like the description, although parts of it are vague. Maybe try to give the reader a little bit more, which I know is hard. For example: 'comes face to face with the darker side of the broadcasting industry' doesn't give me much to go on. What specifically happens here? I'm also confused at the last sentence...what can he lose? We already know he's framed for a crime, I assume in this time he can still lose his freedom (ie. go to jail) or even his life for that. What else can he lose? I want to know the stakes.

I think the beginning is pretty solid. The action comes right away, which is a plus in my book. I did notice one typo - dig instead of big - which might be putting people off the book if they think it hasn't been edited. But, like I said, I feel like it's a solid beginning and I would read on to see what happens.

I am wondering about the 'about 180 pages' part. If I go by the standard 250 words per page, that turns out to be roughly 45,000 words. That's borderline novella territory. I'm glad you do state the page count because people do like to know if they're getting a shorter book. I might put the word count on it, just to be clear, but I personally like to know word count so that could just be me.

I'm guessing a cover change would be the most helpful thing for this book. What do you guys think?
Posted by Victorine at 3:24 PM