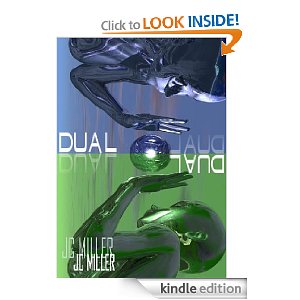 Dual is the story of Betty, a woman who in one short day, will have to answer these questions.

Betty looked down to her feet at the pumps she had stolen from a corpse. Their bright red color and faded toes pegged them as being vintage. All forms and methods of dyeing had been banned soon after the Seven Wars and only the older generation now owned anything of color.

She grabbed a seat as close to the stage as she could get. The lecture hall was filling up fast and the constant chatter and chair scraping was grating on her nerves. The recent government ban on public gatherings would go into effect the next day, and this would be the last of them. Betty suspected the overwhelming turnout was due more to that fact than any real interest in the subject matter. But she was interested. Very interested.

She leaned forward as she saw an older gentleman shuffle quietly across the stage to the microphone. “Ladies and Gentlemen, I’d like to welcome you to today’s seminar: Parallel Universes: Parallel Lives. I’m Professor Ben Whitley.”

She smoothed her dark hair back and poised pen over paper, leaning closer so as not to miss a word. She’d waited a long time for this. As the professor spoke, it became clear to her that most of the audience had been unable to suspend their disbelief for any length of time. For the next two hours, there was a lot of squirming, coughing, and foot shuffling going on around her.  But Betty sat still, leaned forward in rapt attention, only breaking her concentration once to shush a couple of people who had come only to socialize.

There was only one moment where all eyes were directed to the stage.  It was the same moment that had Betty frozen in place with an excitement coursing through her.

The professor had saved his bombshell for the end.

Vicki's Comments: I really like the cover for this book. I think it fits the genre and storyline well. I find it eye-catching, and I like the concept. I don't think the cover is hurting this story.

I like the description too, but I think I'd like it better if it were more personal. I would like to know more about Betty, and have the blurb focus more on her problems and conflicts. A description overhaul would be my recommendation.

I like how we get to see a bit of Betty's character right away, with the stolen shoes. It also shows us the world in which she is living. I think the concept is fantastic. I might suggest joining a critique group, just to tighten things up just a bit, but I do think the story grabs and holds on.

Honestly, I like the cover, the blurb, and the story. If I had to pin down one reason this short story isn't selling, I would guess it's because no one knows about it. The author didn't give me any marketing information, so I'm guessing there's not a lot of marketing going on. I might try to give away some copies to gain some interest.

What do you guys think?
Posted by Victorine at 12:24 PM