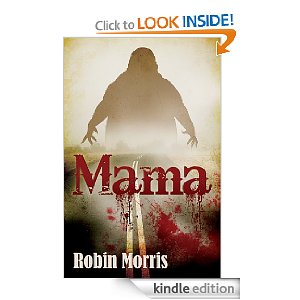 Author: Robin Morris
Genre: Horror
How long it's been on sale: Five Months
Current price: $2.99
Marketing: Submitted to a lot of review sites, but only a few reviews have come out. I have put it on Facebook and Twitter a lot.
Total sold so far: ~20
Link to book on Amazon: Mama

As the Conover family drives from L.A. to Chicago, increasingly strange things begin to happen. Nine year old Michael sees a face form in the glass of the car's window. Fourteen year old Alison sees two creepy children outside the family's motel room. A car follows them, then purposely hits them and speeds away.

Mama has found the Conovers and is using them as a lesson for her children. Mama is relentless, Mama is powerful, and Mama will not stop until the Conovers are dead.

Paul Hilch’s Mazda minivan pulled a little ahead of the Winnebago. On the hill, the weight of the big vehicle held it back. It was a very slender lead. Paul knew it wouldn’t last long. He also knew he was going to die. The woman and her children were monsters. Worse, they didn't exist, according to the sheriff he talked to in Barstow. Get some rest, the sheriff said. Don’t drive such long hours.

Papers flew around the cabin of the minivan. His briefcase fell open, letting its contents loose. A sales chart hit Paul in the face. He swatted it away.

The minivan crested the top of the hill. Paul saw his death in the down slope. He looked desperately for any hope. The brutal sun blasted the desert landscape. There were no other cars. The only witnesses were cactus.

Another paper hit Paul in the face. He pulled it away. It wasn’t a sales chart, or any other business paper. It was the picture Jimmy gave him just before he left L.A.

Daddy and Mommy and Jimmy, in the five year old's wavering crayon line, stood together on a boat. Maybe Jimmy was thinking of the boat ride they took to Catalina a few months ago.

The Winnebago crashed into the back of the minivan.

There had to be a way out. A truck driver would come to the rescue. A state trooper would pull the RV over and arrest the hideous woman. He would wake up in a hospital and someone in authority would explain everything.

Paul heard a giggle. He turned his head and saw the baby. The fat, naked, horrible baby sat in his passenger seat. He jerked his head to scan the back seat, horrified that the woman was also in his car. Nothing there.

Vicki's Comments: I really like this cover. It shows the horror genre very well. If I were to nit pick about one thing it would be that the shadowy figure doesn't look like a woman. But that's a very picky thing, and I don't think that is why this book isn't selling. The cover is a win for me.

The description is pretty good, although I think it can be better. The stakes don't feel high enough for me. And I'm confused as to why this paranormal "Mama" is after this family. What did they do?

The book starts with action, which is good, but I feel like it fell a bit short for me, maybe because I didn't have any investment into the character. I don't know Paul, and I didn't get any sense of him in this snip. I also felt a bit removed from the action. I should be on the edge of my seat, but something was holding it back for me. The first few lines were confusing. I can't tell that he's in a life and death situation, I thought maybe he was joking around with another car on the road. I also didn't feel any emotion from Paul.

I might workshop this book through a critique group to get that final polish. I think it just needs to emotionally connect with people, and I didn't get that.

What do you guys think?
Posted by Victorine at 7:02 AM