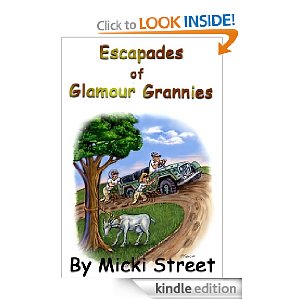 Author: Micki Street
Genre: Comedy
How long it's been on sale: Since July
Current price: $2.99
Marketing: At the moment nothing – I am in the process of setting up a blog.
Total sold so far: 1
Link to book on Amazon: Escapades of Glamour Grannies

Toss the bloomers, get a bikini wax and slip into a thong: life begins at sixty!

Dotty, Nora, and Wilma are enthralled by the charismatic Lucas, who dupes them to holiday on the island of Brazzina, blissfully unaware he’s a drug baron with an ulterior motive.

Enter Major Ramsay Milestone, whose green eyes and cookie-duster moustache has Dotty’s hormones do the tango. Milestone, an undercover agent for the Drug Eradication Unit, rebuffs her amorous advances: he's focused only on catching Lucas, the drug baron – while clandestinely preventing Dotty and her friends from getting themselves killed. Will Milestone nab Lucas after Dotty and her friends unwittingly obstruct his covert military operation? Will Milestone forgive Dotty and allow her to toss the thong and rev his libido?

The escapades of the glamour grannies’ innuendos cause havoc like a ticking time bomb.

It was a cold February lunchtime; Dotty Crowdy sat next to the roaring fire and moodily watched the brown liquid of her sherry coruscate as she twirled the stem of the crystal glass. Mozart’s musical masterpieces played softly in the background. She looked at the £90 Timeless piece she bought, impulsively, which ticked at an irritating slow pace.

“Bollocks to this boring lifestyle,” she said, and leaped to her feet to get her mobile phone from her handbag on the hallway table. She grimaced at the mirror above; sixty-five years old and she still had a lot of living to do.

“Age is a state of mind,” she reminded herself. She dug deep into her handbag, retrieved her mobile phone, and sent a message to her two dear friends: Meeting at my house this afternoon at three o’clock – don’t be late.

“This freaks me out,” Wilma Christie stomped, impatiently pushing long strands of dyed blonde hair out of her face. Every word hissed steam. “Fifteen months ago we led a peaceful, normal life with Dotty living in Scotland. Since Sydney died and she moved here, she’s become irrational and demanding.”

Her life-long friend Nora Worthington, her coat pulled tight around her slightly chubby figure, ignored her as she negotiated the slippery path.

“For heaven’s sake, answer me.”

Nora stopped in her tracks. “Why are you complaining? You know peace doesn’t last forever. She’s probably invented a rocket to fly us to the moon and needs our important opinion.”

“No way am I flying to the moon – that would be hell!” Wilma kicked a patch of ice out of her path and lost her balance. Nora caught her before she fell.

“You must be careful, Wilma; falling at our age is dangerous.”

“Aw shucks, Nora, we aren’t that old. I’m pissed off my hair is damp and a mess.”

Nora looked up at Wilma’s frizzy perm. Such a minor issue compared to breaking a leg, she thought.

“If you had worn sensible shoes instead of those ridiculous heeled boots, you’d have more traction,” her reply, dogmatic.

In silence, they completed the short distance to Dotty’s house.

Vicki's Comments: I think the cover could definitely be improved. The font doesn't look professional, and I'm not fond of the picture. I don't get a good feel for the genre from the cover. I would suggest getting a graphic designer to help out. (Which, by the way, isn't always expensive. Mark, who was featured on here, said there are designers on oDesk.com who will design a book cover for $15 or $20.)

I actually like the description. With some minor tweaks, I think it can be fantastic. I would see if you can workshop the blurb on a critique group, or get some opinions from other writers. (For instance, I would cut the questions, and rephrase them as statements.)

The story starts at a good place, I think, but I would suggest joining a critique group to tighten up the writing. It's got good bones, but there are some issues that need to be smoothed out. For instance, "stomped" is used as a dialogue tag. People can't stomp words. They can shout, whisper, or say words. Stomped should be used as an action after the dialogue. It's a minor thing, and can be easily fixed, but I found several issues within this first bit that makes me think this book needs a little more work.

What do you guys think?
Posted by Victorine at 12:10 PM

Email ThisBlogThis!Share to TwitterShare to FacebookShare to Pinterest
Labels: Comedy