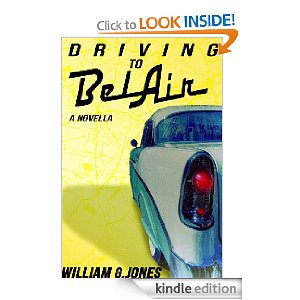 Author: William G. Jones
Genre: Contemporary Fiction
How long it's been on sale: Aug 28th
Current price: $.99
Marketing: Given away 125+ review copies, scheduled blog reviews, took out ad with Frugal eBook Reader, multiple tweets per week to nearly 4000 Twitter followers, posted in Kindle Boards Book Bazaar, repeated announcements through Authors on the Cheap, Kindle on the Cheap, and other Facebook eBook pages.
Total sold so far: 14
Link to book on Amazon: Driving to BelAir: A Novella

Dale had everything—dream job, dream girl, dream life. When he moved to New York to chase his dreams, he never planned on returning to the Indiana farm where he grew up. Yet, one phone call from his ex-fiance brings him back to face the brothers he abandoned and the consequences of the choices he made in pursuit of those dreams. Will a father's last wish be the key to reuniting a family torn apart by tragedy? Or will Dale lose everything while driving to BelAir.

Growing up is hard on anyone. But it’s especially hard when you can’t shake the feeling you were switched at birth.

That was me, the kid who never fit in, always off sync and out of place. I spent most of my childhood feeling like a broken toy, missing some important piece, and I’m pretty sure I’m the only kid in the history of kiddom to break down and cry when he found out he wasn’t adopted.

Come to think of it, I was sixteen when that happened.

Growing up without a mother didn’t help. I was five—almost six—when she died. I remember her only vaguely, just ghost-like impressions stitched together by an artful imagination.

In a way, I’m lucky. My brothers don’t remember her at all.

It’s mostly little things I can recall, like how her smile could make any bad thing okay again. In the twenty-five years she’s been gone, I’ve never seen another woman whose smile was anything like that. If I did, I’d probably marry her on the spot. I remember mom’s long, lightly curled hair and how she’d sometimes put it in a ponytail but mostly let it flow free, how she always wore jeans, even to church, and how she had this way of greeting people that made them laugh.

My favorite memory is how she’d sit on the couch and read books while I played with my toys and watched cartoons. I don’t know what kind of books she read because after she died, dad got rid of them. The only one he kept was an old Bible. I use to sneak into his bedroom as a teenager and look through its dog-eared pages at the margin notes she’d scrawled and the little squares of paper she stuck in different places with prayers written on them.

Vicki's Comments: The cover doesn't say "Contemporary Fiction" to me at all. It looks like it's set in the 50's. And I was pretty surprised by the description. The cover seems fun to me, almost like a comedy. I don't get a serious feeling from it at all. I would suggest a total redesign of the cover.

The description needs work also. If Dale has his dream job, dream girl and dream live, why in the world would he need to go in search of his dreams? That doesn't make sense to me. I think what you mean is his life seemed perfect to others, but he felt unsettled, so he left in search of his dreams. I do like the implication that his father is dying, but I think you need to be more clear of the plot in the description. I would also get rid of the questions at the end.

I like the beginning of the book. It's got a personable feel to it, even though there's not a lot going on. Sometimes that bothers me, but I like the conversational feel to this. It doesn't match the cover at all, though, so I think that's your biggest issue. I would change the cover first, and then work on the description. Maybe get some opinions from other writers on how to make the description stronger.

What do you guys think?
Posted by Victorine at 10:03 AM