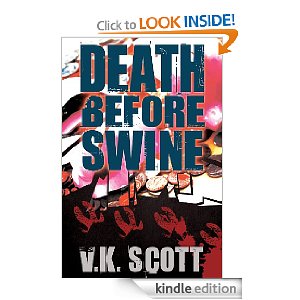 Ben Hart is a high school chemistry teacher who thought his biggest problems were test scores and lunchroom politics. That was before he lost his job, discovered his colleague murdered, and found himself with a new assignment—catch the killer. Now, as he navigates Diamond Alley’s backstreets, his questions are no longer multiple choice: Who can he trust? Will he ever get back to a simple life of worksheets and lab reports? And will he uncover the truth before the killer slips away?

The woman screamed at me. There was no way her son, her precious darling snowflake, could have done it.

It didn’t matter that I had the proof laid out right in front of her. I’d even highlighted the appropriate sections to make it easier for her to read. It still didn’t matter. It almost never did with parents like this.

“There’s no way in hell that my son cheated,” she said. Her gold earrings shook on the sides of her dark face. The woman’s hair, trimmed down almost to her scalp, made her look like a drill sergeant. “How dare you accuse him!”

It was a fair question. She wanted evidence, and evidence was what I had. I paused for a second, making sure that I didn’t show any more emotion than necessary. It gave me some pleasure to see her sweat a little. Abrasive parents were one of the few things I disliked about teaching high school chemistry.

Robert Byrd, my principal, cocked his head to one side, compressing the rolls of fat in his neck. His folded hairy arms rose and fell on top of his stomach. He was waiting for my answer, too.

A lone window about the size of a brick let the only natural light into the room. The light glinted off the well-dusted frames of nearly a dozen awards and certificates nailed to the wall, as well as several inspirational posters. Byrd had closed the door when the meeting started, and the air grew more stagnant by the second as he and the woman stared me down.

I didn’t address either of them, though. Instead, I focused my attention on the sixteen-year-old in front of me. Duntai Kennedy hung his head and ran a hand through his black cornrows. Apparently, the logo on his T-shirt was more interesting than the charges of plagiarism I had just leveled against him.

Vicki's Comments: I kind of like the cover for the artistic value, but as a book cover I don't think it is doing it's job. I get no sense of genre at all from the cover. It does not look like a mystery to me. I think a new cover would really help this book. The title also makes me think it's a funny book, which might not be the way you want to portray it.

There are things I like about the description. I like these two lines: Ben Hart is a high school chemistry teacher who thought his biggest problems were test scores and lunchroom politics. That was before he lost his job, discovered his colleague murdered, and found himself with a new assignment—catch the killer. I would suggest reworking the rest. I would like a bit more information about the book. How does a high school teacher become the person to catch a killer? Is the killer after him? Did he witness the murder? Is he a suspect and has to clear his name? With a bit more explanation I think this description can work.

I like the beginning of the book. I think it's well written. If it were me, I would cut the first two paragraphs and start with the woman's dialogue. I kind of feel like there's too much telling in the first bit, and I can infer from the rest what's going on. But that's a little nit pick. I would read on.

My best guess as to why this book isn't selling is the cover. A redesign would probably help this tremendously. What do you guys think?
Posted by Victorine at 5:13 PM

Email ThisBlogThis!Share to TwitterShare to FacebookShare to Pinterest
Labels: Mystery