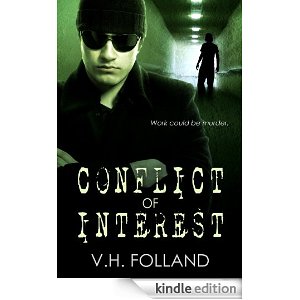 Work can be murder...

A new job, a fresh start, and things are looking up for Harry. Maybe going straight isn't so hard.

He didn't expect to stumble over a job aimed at his new employer, for the kind of money a crook could retire on. It should be simple enough: tell the police, let them arrest the criminals, claim a reward. Sorted.

Except Harry's not a snitch - and it's being organised by his mate...

Climbing out of the small window was harder than climbing in had been, but then I now had the cash box under my fleece. Watching carefully through the small gap, I checked the alley was empty as best I could. Once the security camera was pointed the other way I slid my legs out, breathing in and forcing myself through the gap. The cash box dug painfully into my ribs, then went through. As my feet hit the tarmac I looked up at the back of the camera and grinned. Quickly I headed towards it, planning to wait while it panned passed the side of the alley and walk out in the blind spot. Then I just needed to turn the corner, walk to the little cash–let office I was working from and drop off the proceeds of my second break-in of the night. Simple.

"Gimme your money." OK, it should have been simple, but things so rarely go as planned. I stopped and looked at them. One of the risks of a job like mine - wandering around at night in dark alleys - was running into idiots like this. There were two this time, all designer clothes and attitude, waving these pathetic little penknives like they thought I'd faint. Usually I'd either have gone along with it or thrown a empty wallet in the street and given them a thumping for their trouble. Right now I wasn't just carrying my money though and, after all the fun this evening, I wasn't handing my haul off to anyone.

"Make me." I grinned, curling my hands into fists. Any excuse for a rumble. They actually took me up on it, I'll give them that. Too bad they weren't very good.

They both attacked together, but a step to the side put them in each others' way.

Vicki's Comments: The cover isn't bad, however it does look like kids at school, so I get the impression that this book is about school gangs fighting or something. Since that doesn't jive with the description, I might find a different photo to use on the cover.

The description is pretty good, but I'm not sure what 'a job aimed at his new employer' means. How do you aim a job at someone? Does this mean the main character was mistaken for the boss? If his mate is organizing this, though, he wouldn't be mistaken, so I'd like clarification on this.

I also think the description should mention the length of this book. I believe it's a novella? It's very important to put this in the description, as people will be upset if they buy the book thinking it's a full length piece and it comes up short.

I liked the story, but I think there were some awkward things that could be tightened up. For instance, "The cash box dug painfully into my ribs, then went through." This reads as if the cash box went through his ribs. I would get some more eyes on this, maybe get a few beta readers or an editor, and see if it can't be polished up. The story itself is good. It starts with action, which hooks me. I want to read more to find out what happens next. I'm kind of surprised this book hasn't sold at all. I would tweak the cover, description, and give the text one more polish and try again.

Posted by Victorine at 7:26 PM