Under The Moon’s Shadow 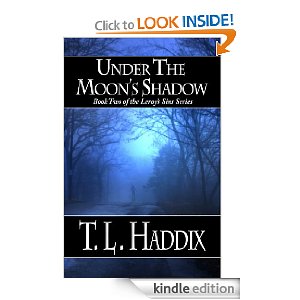 Author: T. L. Haddix
Genre: Romantic Suspense
How long it's been on sale: Since 8-19-2010
Current price: $3.99
Marketing: Ads on Red Adept, Frugal E-Reader, The Romance Reviews.  Also, this title was one of the finalists for Best Romantic Suspense 2010 at The Romance Reviews.  Had several 99 cent sales but didn’t see any significant increase in sales with the exception of February.  Used Twitter and Facebook to promote.
Total sold so far: 110
Link to book on Amazon: Under The Moon's Shadow (Leroy's Sins)

Journalist Beth Hudson knows her hometown. When disappearances are coupled with strange nighttime events on local farms, she puts two and two together to make a terrifying picture. Turning to her friends, family and a mysterious, handsome stranger for assistance in rooting out the truth, Beth is determined to solve the mysteries before another person disappears. At the same time, her contentious relationship with Detective Ethan Moore takes an unexpectedly tragic turn. Will Beth be able to figure out what is going on in time to stop a dangerous killer, or will she be the next victim?

Beth opened her eyes just in time to see a tiny, still-green leaf float past her face. It was moving slowly, that leaf, as though it had all the time in the world, and it seemed unconcerned to find itself detached from the tree that had given it life. She followed its movements with her eyes as far as she could, and turned her head to watch when it caught on a tall, spiky stalk of grass.

Suddenly there was pressure on her abdomen. It was accompanied by a pain like nothing Beth had ever felt before, and it left her gasping. Movement caught her eye and she turned to see Cullen Jarvis leaning over her, his face tense with worry. He was speaking but she couldn’t make sense of the words. She moved an arm toward him but a second sharp pain spiked its way through her shoulder and she let her arm fall. Cullen moved her legs, bending them at the knees, and some of the pain in her abdomen dissipated. She tried to thank him but everything faded around her, and just that quickly, the world went black.

Sometime later, Beth opened her eyes to see Jason hovering above her where Cullen had been before. She was dismayed to see that her beloved, amiable, happy-go-lucky brother had tears on his face. She realized Jason was talking to her, but she couldn’t understand what he was saying.

Without warning, two men in dark jackets and caps appeared. Beth recognized them as local EMTs, and watched as they surrounded her, working efficiently. As one shined a light in her eyes, Beth realized finally that she had been injured. It was clear from Jason’s reaction the injury was serious. She tried to remember what she had been doing earlier, what could have caused her injury, but her mind was sluggish. Beth closed her eyes, startled as she had a quick flash of the floor of a dirty van, remembered the sound of a man and a woman laughing, and saw the terrifying image of the wrong end of a rifle barrel. As she remembered, the truth settled in with painful clarity. The serious injury wasn’t the result of a car wreck or an accident on the farm. The pains in her shoulder and her abdomen had not been caused by a fall or some other benign mishap. She had been shot.

Vicki's Comments: I like this cover, although it says 'creepy' more than romantic to me. But I do think it has a bit of a suspenseful feeling, so I wouldn't necessarily pitch it. I am having a difficult time reading the small print, though, and the title seems crowded on there. Does the small print say "Book Two of the Leroy's Sins Series?" If it does, then I'm surprised the book isn't categorized as a series. I'm also surprised the description doesn't say anything about this being the second book in a series. I would make it very clear if this is a second book. If that's not at all what it says, forgive me. At any rate, I like the picture, but it doesn't portray romantic suspense to me. There might be a better way to get that across to the reader, but I would get more opinions on it before starting a new cover.

I'm going to pick apart the blurb, because it's not doing it for me, and I want to explain why.

Journalist Beth Hudson knows her hometown. - Okay, this really doesn't make me want to read the book. Who doesn't know their hometown? Why does knowing your hometown make you a person that I would want to read about? Why is that even in the blurb?

Turning to her friends, family and a mysterious, handsome stranger for assistance in rooting out the truth, Beth is determined to solve the mysteries before another person disappears. - Turning to your friends and family during a crisis is normal, not suspenseful, I'd cut that part. Mysterious handsome stranger? That's a little bit cliche, but not horrible. I'm interested in handsome characters especially if they are a love interest. However, I'd rather know his name if he's a major character. I think the hook here is that Beth is determined to solve the mysteries, and if the stranger is the love interest there needs to be more about him.

Will Beth be able to figure out what is going on in time to stop a dangerous killer, or will she be the next victim? - I usually frown at blurbs that put questions at the end. It doesn't make me want to read the book. I'd much rather have it end with: Beth must stop the killer before she becomes the next victim. (I took out dangerous because, really, is there a killer that isn't dangerous? It's redundant.)

Now that I totally picked apart the description, I will say that I think the premise of people going missing and a journalist trying to find the truth is good. I do want to know more about the romantic part of the book. Is the romance with the mysterious stranger or the detective? Or are both love interests and she must choose? If that's the case, make it more clear in the description. I also feel like there's more to this story besides the missing/dead people but we don't know what it is because the description was too vague.

The book starts with a leaf falling from a tree. I'm not sure that's the best place to start the book. It seems a bit too slow and symbolic for a romantic suspense novel. I'd also get rid of wording like "just in time," "suddenly" and "without warning." (And as an aside, the first two sentences didn't make sense to me, if she opened her eyes just in time to see the leaf, and yet it was taking all the time in the world, those seem like contrasting thoughts.)

I'm not sure the prologue is necessary, is this something that happens a long time ago? Or is this a jump into the future, before we start the real story back at the beginning? If it's back story, you can let the details come out as the story progresses. If it's a jump into the future, it's not working for me. This isn't a beginning that grabs me. Some character I don't know is confused and then realizes she was shot. Since I don't know the character, I don't have an emotional reaction to her getting shot. It's not pulling me into the story like I think you want it to.

Honestly, I would run a couple of chapters through critiquecircle.com. There is some redundant phrasing and things that I would suggest tightening up if I were critiquing this. If you make the beginning tight, it will pull readers in and make them want to read more.

I'm guessing the description is what is hurting this book the most, but I still would rework the first few chapters and get lots of opinions on those to make sure they hook readers.

What do you guys think?
Posted by Victorine at 3:07 PM