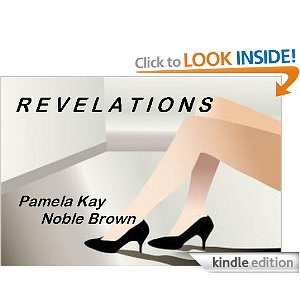 Author: Pamela Kay Noble Brown
Genre: Christian Fiction/Inspirational
How long it's been on sale: Feb 27, 2011
Current price: $1.99
Marketing: I've posted it on my blog, about two weeks ago began tweeting content about every three hours, post about it on FB, Goodreads, Shelfari, and Kindleboards.
Total sold so far: 45
Link to book on Amazon: Revelations

A mother's secret...her daughter's shame.  Melanie has finally met the man of her dreams, but life is never easy for one who has suffered a lifetime of horrific loss. She was compelled to return to her hometown, sure that enough years had passed since the tragedy.  But why does she keep having those same horrible nightmares?   Was domestic abuse a curse that was passed on from one generation to the next with no escape?

And her boyfriend's mother Mrs. Harriet Cornelius seems to be a sweet person, but there's something about her that Melanie just can't put her finger on.  A shameful family secret may just keep Melanie from becoming too deeply involved, yet she longs for the kind of life and love others have. Will she find a way to overcome her fears, or will she simply walk away?

“I hope I can see you again really soon,” Mike said as he helped Melanie into her sweater.

“Well, I certainly have enjoyed our dates, “Melanie replied.  “But let me give you a call in a few days ok?  I’ve got a lot going on right now and need to get some things situated.”

“No worries,” Mike replied. “Take your time.  I’m really starting to have some strong feelings for you and I want you to be sure of what, if anything, you feel for me.  So give me a call when you’re ready.  I’ll be waiting.”

Melanie watched Mike walk off after he’d helped her into a cab and she couldn’t help but smile as she thought over their short but promising budding relationship.  It had all started about five months ago.  After recently moving back to Hampton, South Carolina, Melanie had immediately become active in community theater.  With all of the turmoil going on in her real life, she’d loved immersing herself into the various characters and losing herself for a few hours.  One day, as she was leaving the theater after a Sunday afternoon matinee, she stopped short upon hearing her name.

“Melanie….Melanie Walker?” called a well-dressed woman who appeared to be in her sixties.

“No...and I’m sorry.  I didn’t mean to startle you.  I just saw the play you were in and wondered if I might have a few minutes of your time?”  The woman took a few steps towards Melanie with her hand extended.  “My name is Mrs. Harriet Cornelius.  You might have heard of Colton Cornelius Industries?”

“Why yes…I uh… yes we can talk and yes I have heard of Colton Cornelius Industries,” Melanie

After I get past the strange size, I see a pair of bare female legs which makes me think this is chick lit or romance. The background makes me think of science fiction as does the font. The title makes me think of the bible, which doesn't go with the picture on the cover at all. However, the genre is Christian Fiction, so I'm guessing the title might be appropriate. I would change the picture and the font.

I don't like the first sentence of the description, I think I would cut that. The rest of the blurb is actually pretty good. I would change the questions to statements, or cut them, and I would cut both of the times you use 'just.'

I'm not sure why the book starts with Now. It made me think there was a prologue that perhaps started Twenty Years Ago or something. In fact, I got curious and downloaded the sample, but no prologue. The book simply starts with an underlined Now. I think this is confusing and should be deleted. Unless otherwise stated, people will assume your book starts in the present.

The writing could be improved. There were some mistakes which makes me think hiring an editor would be a good idea. The dialogue seemed stiff, and there were a lot of instances of 'telling' instead of 'showing.' Maybe joining a critique group would help. I feel like I say that all the time, but if the writing needs tightening up that's the best way to do it, IMHO.

I like the description, and I think the premise of the book is good. My two concerns are the cover and the writing. I also noticed someone said this was a shorter story in their review. I would definitely put the word count and page count in the description so potential customers know what they're getting. If it's shorter than 50,000 words I would make sure everyone knows it's not a full length novel.

What do you guys think?
Posted by Victorine at 1:42 PM