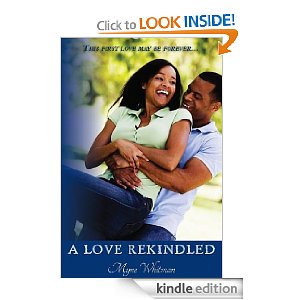 Author: Myne Whitman
Genre: Multicultural romance
How long it's been on sale: March 2011
Current price: $2.99
Marketing: Facebook and Twitter as well as reviews and Goodreads giveaways
Total sold so far: 55
Link to book on Amazon: A Love Rekindled

Efe returns to Nigeria after years in the United States, dreaming of a happy, independent life. However, her nights become plagued by nightmares of Kevwe Mukoro, her ex-fiancé. Long hours at work and drinking in nightclubs only provide temporary relief, and when she encounters another Mukoro, she knows it’s a matter of time before Kevwe is back in her life. Sparks fly when they finally meet again, but desire is no match for bitter memories of heartbreak. All these years, Efe believed she was rejected; now Kevwe claims he’d never stopped loving her. Stuck at a crossroads, Kevwe prefers to look to the future, with them together. Efe does not want to lose him, yet she needs the traumatic events of the past resolved before she can give in to rekindled love.

She hated walking this road so late, but she couldn’t avoid it after reading at the library. Empty tables lined the roadside, and behind one of them, a stone-bound ring of embers, dying remnants of the suya mallam’s fire. Kerosene lamps and candles flickered in the darkness, filling the air with smoke.

Efe coughed, praying she would not meet secret cult members who were reputed to use this route on their way from their haunts. Someone appeared ahead and she slowed, mouth drawn tight, and fists clutching her chest. A little yelp escaped her when the person turned to face her.

She heaved a sigh of relief at the flashing white teeth and walked towards him with a smile of recognition.

She stopped in a moment, clenched hands wiping her eyes when, instead of moving closer to him, he drifted further and further away. Sounds of revelry disturbed the silence of the night and Efe walked faster, heart pounding and sweat dripping from her nose.

More shadows melted out of the side of the road, coming towards her. The figures chanted gutturally, and when they raised their hands, something metal glinted in the light from the fire. Menace filled the air thicker than smoke and Efe ran forward, screaming Kevwe’s name.

He couldn’t leave her here, he was supposed to love and protect her forever…

The alarm on the bedside table buzzed, and she jerked awake. It took another moment to lift eyelids swollen from tears. She was under the blankets, but the cold tremors from the nightmare still racked her. Efe dragged herself out of bed, feeling like her head was stuffed with hot rocks. This was the third time in as many days she’d had a Kevwe nightmare.

Vicki's Comments: I like the cover, although I have a couple of nit picks. I'm not sure why it fades to blue on the left side. There doesn't seem to be a reason for it, so it attracts my attention and makes me wonder why it's there. I also can't read the small type at the top. I like the title, although it does seem a bit too close to the top of the blue bar. I wish I could read the author's name better, I might suggest a different font for that.

The people on the book look like Americans to me. That's probably a stupid statement, I'm sure people in Nigeria wear jeans and polo shirts sometimes, it's just not what I think of when I picture Nigeria. In fact I did a google search for Nigerian photos and only saw one polo shirt. The trees also look more Midwestern America to me. I don't know if this effects sales at all, I just wanted to throw that out there so you know what I thought of at first glance.

The blurb is good but I think it could be better. I like that it's a typical romance story where two people who broke up find each other again. The 'encountering another Mukoro' sentence is kind of strange. Maybe explain why she's forced together with her ex again. Just encountering a family member doesn't explain it.

This story starts with a dream. If you google, "How not to start a novel," just about every list you will find will tell you not to start with a dream. Now, if you're writing a novel that takes place in a dream or dream walking is the focus of the book, I can see where that might work. But this dream isn't particularly scarey. It doesn't pull me in and make me want to read more. I would start the novel at a different point and if you *have* to show a dream or two in the book move it to a different spot. And if you don't have to show the dream, I would cut them altogether.

I think the beginning of the novel is mainly what is holding this book back. Maybe get some other opinions on it, though. I did find a few places where the prose could be tightened up.

What do you guys think?
Posted by Victorine at 2:57 PM