Death Has a Name (Book One of the Brodie Wade Series) 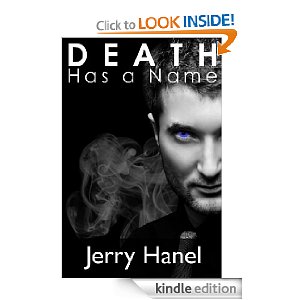 Praise for the Brodie Wade Series:
"Do you love characters that grab a hold of your heart and won't let go? How about paranormal mysteries? Want a dash of romance and true friendship on top? Then you really need to read The Brodie Wade series."
-- Keryl Raist, author of Sylvianna

There is a Truth that exists. It is active. Alive. It fights the bounds of reality to make itself known. It's not my truth. It's not anyone's truth. It is The Truth.

There are times when select individuals can see and interact with The Truth, but Brodie Wade has been able to interact with it since he was a child. It has scarred his mind and body, but it also gives him the ability to know things that he shouldn't know. Thus, he has taken employment as a psychic detective.

Working together with Detective Phil Dawson, Brodie must summon all of his will to go head-to-head with The Truth to solve the latest string of murders. It appears that Dominick Fredrickton -- the Midnight Killer -- has returned from the grave, beheading the unfortunate few that get in his way.

When The Truth confronts Brodie and tells him that he must protect the Third Key, Brodie must discover what - or who - The Third Key is.

Can Brodie stop Death from obtaining the Third Key and regaining his physical form?

A middle-aged woman dashed through the darkness, then down the stairs. A man in a dark shirt was only two steps ahead. She had been attending to her mentor when she'd seen movement down the hallway. In an instant she willed herself into shadow and darted after him. She had to catch him before he escaped with her mentor's prized possession.

She held a glowing orb tightly in her right hand and a .45 in her left. Both hands were covered in blood from the man she'd always known as her mentor.

Was the beast now free from the chains that held him bound in the eternal realms? In the five years since she'd been promoted, her life had been relatively uneventful. But in the past twenty-four hours, everything had come undone. What had she become? A killer? A protector? She wasn't sure any more. Her life was spinning out of control.

She chased after the intruder, running forward at full speed toward the wall that he passed through with ease. Her heart raced and her lungs could not take in any more air. She was pushing herself to her limits trying to catch the servant of Death. If he got away, all of her kind would be in trouble. The world would be only one step away from torment beyond her comprehension.

As she neared the far wall she extended her hand, passing through as if it were a simple illusion. Emerging on the other side, she tried to get her bearings, having traveled several miles from the house she had been in only moments before. She stood directly in the middle of the street on Broadway. Cars honked and squealed as they sped by on both sides.

Frantic, she squinted left and right, searching for him, hoping that...

Vicki's Comments: I really like this cover. If I were designing it, I may not have put the title quite so close to the top, it looks a bit squeezed in to me, I probably would have given it a tiny bit more space on top and on the sides. But I admit that's nit picky. I love the font, and the images are wonderful. It does say "Paranormal Thriller" to me.

I think it's fine to put the genre in the description, in fact sometimes I wish more people would do it. At times I can't tell from looking at the cover and description exactly where the book fits. I would take out the praise, though, there's plenty of good reviews for this book and if people want to read them they can scroll down. The only time I would keep this kind of thing would be if the review was from someone very famous and influential, and even then I would keep it to a short snip.

The first paragraph of the description doesn't pull me in. When I look at a description, I want to know the conflict and plot of the book. The part about the truth being alive should come out in the story.

The rest of the blurb needs to be reworked, IMHO. There's some unnecessary information that could be cut, and I would get right to the conflict. Something more like: When psychic detective Brody Wade is asked to solve a string of murders he must face his sometimes terrifying visions in order to get to the truth. This gives you a lot of information in one sentence. It tells us that Brody is a psychic detective, that there's been a string of murders, and that Brody doesn't love the psychic visions he sees.

I wouldn't end with a question. Most of the time I find this cheesy. Sorry. If the information needs to come across, I would phrase it as a statement: Brody must stop Death from obtaining the Third Key and regaining his physical form. With a little tightening up, the blurb can be much better.

The beginning of the novel is a bit confusing to me. At first I wasn't sure who the point of view character was. Then I realized it's the woman, but I don't know her name. I don't know what she is. I feel very far removed from the character. I fear there are too many unanswered questions in this beginning.

If it were me, I would name the character and try to tighten up the beginning. I'm glad it starts with action, but I think there needs to be more clues as to what is going on. I'm guessing she's a ghost, or part of this Truth, but since she's got blood on her hands that makes me wonder if I'm wrong. I wish there were more explanation. (Which is probably pretty hypocritical because I'm the queen of confusing people.)

I'm guessing the blurb and the beginning are holding this back. What do you guys think?
Posted by Victorine at 8:12 PM