Lodestone Book One: The Sea of Storms 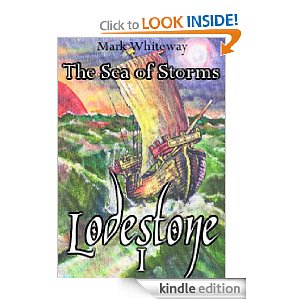 Author: Mark Whiteway
Genre: Science Fiction
How long it's been on sale: July 22, 2011
Current price: $2.99
Marketing: All my books are listed on Amazon, Barnes and Noble and Smashwords premium catalog. I am featured on Facebook and Twitter, (although I only have a following of three or four people!). I have my own website with regular news updates relating to the series. The website has two videos, one a short book trailer, the other a youtube video made by a reviewer who designated Book One their "Book of the Month". A more sophisticated, movie style trailer is currently being made.

I have done extensive research on Blog sites and made numerous pitches, as a result of which I now have over sixty reviews, all either four or five star. Most of these are posted on Amazon. I have entered a number of awards programs and now have some 16 awards to my name. I have done four blog interviews. I have done one library book signing and sold 16 paperbook copies of the first two volumes there. I have definite plans to do at least two more.

Total sold so far: Paperback 17; ebook 28
Link to book on Amazon: Lodestone Book One: The Sea of Storms

Ail-Kar, a white-hole portal from another universe, rains meteoroids onto the surface of the planet Kelanni. But the so-called "lodestones" behave according to different physical laws, transforming Kelanni's society. With the aid of the fearsome Keltar in their flying cloaks, the Kelanni are being put to forced labor to mine the lodestones.

Shann, an orphan with a fiery disposition, witnesses a battle between a Keltar and a stranger bearing a similar flying cloak. She tracks down the stranger, and learns of the technology behind the Keltars' power, joining him on a mission to free the slaves and cut off their supply of lodestones.

Meanwhile Keris, a Keltar, is sent on a mission to track down the rebels. She is attacked by a flying creature and saved by the enigmatic Chandara. At their Great Tree, she learns that a mysterious "Prophet" is out to destroy the Kelanni people. Their only hope is a powerful instrument hidden in the distant past.

Pursued by Keltar, the party will encounter bizarre creatures, ancient technologies and terrifying dangers. Finally, they must seek to cross a massive storm barrier in order to reach the other side of their world, where a world-shaking revelation awaits.

A knot of a dozen or so Kelanni villagers stood in the market courtyard, eyes raised skyward. Dark clouds roiled overhead, and the rain was persistent, running down their faces and into their eyes, making it difficult to see. At the edges of the courtyard, almost melted into the shadows, were many others, pulled by curiosity and repelled by apprehension. In the centre, four downcast youths stood at either side of two laden wooden carts.

As they watched, a shadow moved across the expanse, growing silently, rapidly. It resolved into the shape of a Kelanni, dark cloak flared outwards like a bird with a single great wing. He dropped from the sky with a terrible grace and landed in the space before the knot of villagers, with the cart to his back, the cloak settling about his shoulders. He stood erect, raindrops trickling down his dark olive cheeks like false tears. Close cropped dark hair bristled on his scalp and down the back of his neck. His right hand grasped a dark wooden staff, diamond blades at each of its ends. His tail flicked from side to side.

He walked forward and cast the fold of his cloak to one side, lifting his left hand. The first three fingers were raised; the other two were bent downwards.

“Fealty and service to the Three,” he announced. His voice was hard, confident.

“Which of you is headman?”

A middle-aged villager dressed in plain tan jerkin and breeches stepped forward. He was balding, with a thin, lean face and a thin, lean voice. “I am called Boran. May I know the name of Prophet’s Keltar?”

Vicki's Comments: When I look at the cover of this book my first impression is that this is a fantasy novel. I'm not sure why, maybe the colors. When I look closer, I see the picture is a ship and the name of the book indicates sailing. It almost looks like a middle grade novel when I examine it. I'm guessing by the cover alone this book is about being out at sea. But then I see it's labeled as Science Fiction. I'm wondering if the cover isn't giving readers the wrong impression. I'd also like to see a different font.

The description is bogged down with the unknown words. I'm wondering if some of these unfamiliar words can't be reworded. I mean, in the book I assume these words are introduced naturally and with space in between, whereas putting them close together in the description confuses me. Maybe leaving out a few of them would be better.

Also, after reading the description, I feel like too much information is trying to be portrayed here. I want to know the main conflict. What's the reason I should read this book? Give it to me straight, without all the extra stuff that isn't needed. But I readily admit I'm in the "less is more" camp when it comes to blurbs. Others might like longer descriptions with more of the plot disclosed.

Now, I didn't post the From the Author section here because I don't normally do that, but I would like to bring this up. The large number of obscure awards is a turn-off for me. When I research these awards I've never heard of, I find many of them are tied into vanity publishers or places that offer paid services like reviews for authors. This does not give me confidence in the book. I would take the awards off. I am also put off by the excerpt. I would much rather grab a sample of the book if I'm so inclined. The "wall of text" makes me not want to read any of it, which is definitely NOT what you want a potential customer to feel.

The beginning of the novel doesn't have a point of view character, which makes me feel distanced from what is going on. I'd much rather start in the perspective of one of the main characters. I'm also not a fan of adverbs in dialogue tags. I'd get rid of the 'raggedly' and maybe show this.

I think with a little tweaking the beginning could grab the reader more. What do you guys think?
Posted by Victorine at 2:42 PM