Where Dreams are Born 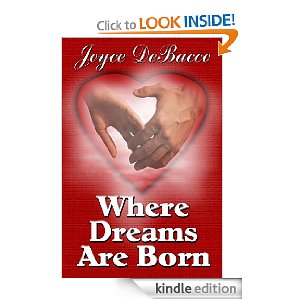 Author: Joyce DeBacco
Genre: Romantic Suspense
How long it's been on sale: Jan. 26, 2011
Current price: $3.99
Total sold so far: 23
Link to book on Amazon: Where Dreams are Born

Fate brings Vicky to the home of Jack Hazlett, a harried widower in need of domestic help. She never expected to find a safe haven for her son—and the man of her dreams.

It was supposed to be a win-win situation—a safe environment in which to raise a son for single mom Vicky, housekeeping and childcare for widowed Jack. Believing they’ve had their shot at happiness, neither is looking to complicate their lives with a romantic entanglement. At first Jack sees Vicky as skinny and plain, guarded with him, but openly warm with his children, an important quality for a man who grew up in the foster care system. However, his growing attraction to the woman who scrubs his toilets and washes his underwear complicates their working relationship. Vicky, too, is reluctant to get involved, having been down that road before with disastrous results.

When Jack learns his friend fathered Vicky’s son and now wants partial custody, he feels threatened. He’s come to care deeply for both, and doesn’t want to lose the family they’ve become. In desperation he offers a radical solution—marriage. Vicky knows she can do worse than marry Jack, but wonders how successful their marriage would be when its only reason for being was to keep from losing her son. Add to this a troubled child keeping a secret about her dead mother, and a vindictive ex bent on revenge…

Vicky Lowell cleared her throat and rang the doorbell. When no one answered her first ring, she rang the bell again. This time a baby howled and heavy footsteps approached. The door swung open.

“It’s about time you got here,” the harried man shouted over the din.

Taking care not to muss his shirt and tie, the man handed the fussy baby into her arms. Two little girls in their underwear clung to each of his pant legs. “You’re late,” he said. “That means I’ll be late. But I’m willing to overlook that if you can start right away.”

“Mr. Hazlett, I think there’s been some mis—”

“Look, if it’s all right with you we can discuss the details later. I have a very important presentation this morning so I have to hurry. I promise I’ll make it worth your while if you can start immediately.”

“Damn it.” He shook off the clinging children. “Look at that, I’m wrinkled already.”

The man strode into the kitchen and she followed. “But, Mr. Hazlett—”

“I left important phone numbers for you on the desk.” He took a last slurp from a coffee mug on the table, grimaced, and then rushed for the door. “If you need anything else, ask the kids,” he shouted over his shoulder.

Mouth still open, Vicky took note of her surroundings: a kitchen table littered with pizza crusts and cereal bowls, remnants, no doubt, of its occupants’ last two meals, counters piled high with dirty pots and pans, and microwaveable plastic overflowing from the trash can. Clearly, Tuesday must be the cleaning lady’s day off. Though from the overall condition of the room, the woman must have been AWOL far longer than a day.

Surprised people of obvious means could live so haphazardly she turned her attention to the whimpering baby in her arms and the two children staring up at her. The younger one hid behind her sister, a thumb in her mouth and one tiny finger hooked around a button nose.

The baby, suddenly aware of the stranger whose hip she straddled, began to cry in earnest. Vicky bounced the child on her hip.

“Jodie—is that her name? And what’s yours, sweetie?”

The child released her wrinkled thumb. “Soo-soo,” she said, before latching onto it again.

“Suzy.” The older girl yanked her sister’s thumb from her mouth with a pop. The indignant thumb sucker did an angry jig before re-plugging her mouth.

Vicki's Comments: I want to like the cover, I really do, however there's something about a picture framed in a heart that screams amateur. I think I would re-do the cover. I would try to portray the romance and the suspense. The hands do a good job of showing the romance but I don't get suspense at all from it, and after reading the description and the reviews I think that's an important part of the book.

I like the premise of this book, but the premise is getting lost in all of the stuff in the description. I feel like it can be boiled down to the nitty gritty. We don't need to know that at first Jack sees Vicky as skinny and plain, or that Jack grew up in a foster care system. Don't add back story into the description. Pare down to the basics - girl gets hired by guy - girl's son is threatened - they marry to solve problem - ex comes after her. This is the basic story from what I can gather, so the description needs to be short and sweet to say that.

I loved the writing. This is the kind of book I would pick up. It starts with a bang, which is how I prefer a book to start. I can see this hooking a potential reader right away. I would buy this book right now if I knew the heat level of the romance. (That might be something to include in the description. There are some who will pick up any romance no matter the heat level, but I'm strictly a sweet romance/closed door girl, so I don't buy romances unless they specify this in the description.)

Over all, I think the description is the biggest thing holding this back, with the cover being the second.

What do you guys think?
Posted by Victorine at 7:18 PM