A Place Beyond the Map 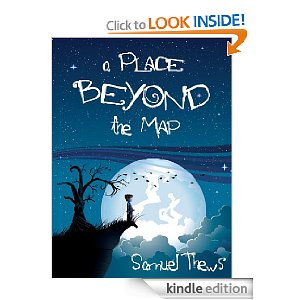 Author: Samuel Thews
Genre: Middle Grade Fantasy
How long it's been on sale: This book was submitted on July 12 and was only for sale 1 day when submitted.
Current price: $2.99
Marketing: None listed.
Total sold so far: 1
Link to book on Amazon: A Place Beyond The Map

Phinnegan Qwyk thought he knew everything there was to know about fairy tales. But when the notorious Faë Periwinkle Lark snatches him from his cozy home in Ireland to a Place-Beyond-the-Map, Phinnegan discovers that reading a fairy tale and living in one are two altogether different things.

When Phinnegan escapes from the mountain prison of Féradoon, he must travel a treacherous path riddled with dangers both fair and foul - where the wild hounds of the Faolchú await a single misstep and gholems stalk their quarries unseen from the shadows. Forced into a daring match of wits with a beautiful troll, Phinnegan may find the way home if he wins – but if he loses, he will be her pet. Forever.

Phinnegan Qwyk drummed his fingertips on his desk, oblivious to the hair-raising screech of chalk grating across an old blackboard as Mr. Rowlands scribbled arithmetical figures. Phinnegan had always disliked the cold, unforgiving nature of numbers, even on an ordinary day - and today was anything but ordinary.

No, today was special – or at least it would be once the final grains of sand trickled from top-to-bottom in the large hourglass seated on Mr. Rowlands’s desk. Phinnegan had never understood why it was called an hourglass. The ornate timepiece held three hours of sand, not a moment less or more. At home, Phinnegan’s mother used a similar glass to time her baking, but it ran through in a neat half-hour. The term “hourglass” wasn’t appropriate for either.

But whatever it was called, Mr. Rowlands began each morning with one “run of the sand” before allowing the children a break for lunch and recess. The afternoon likewise consisted of a single run of the sand, which, much to Phinnegan’s pleasure, was at an end.

As the final grain slipped through the narrow waist of the glass, Phinnegan sat straighter, anticipating the dismissal of the class. Mr. Rowlands was always prompt in ending his classes, reasoning that he had once been young and knowing full well that such restless minds would ignore him once his time had run its course).

Today, however, Mr. Rowlands seemed not to notice.

Phinnegan waited a minute, then another, and then a third.

But the screeching continued, as did the drone of Mr. Rowlands’s mundane voice. On an ordinary day, Phinnegan would not have cared in the least. He did not mind school as much as many of the other pupils.  But as the moments passed, not a single schoolmate sought to inform the teacher of the time.

Vicki's Comments: Okay, it's kind of silly to submit a book when it's only been selling one day. I probably should put in the rules some kind of time limit on how long a book needs to be out before I'll critique why it isn't selling. But since this doesn't seem to be going like gangbusters from the current rank, I'll give it a whirl.

I love the cover of this book. I think it's perfect. It tells me the genre at a glance, it draws me in and I think it's well designed. Great job!

The description can definitely be improved. This probably is hurting sales the most. The first paragraph tells me that fairy tales aren't that great to live in. It also tells me the main character gets snatched and taken to a land beyond the map. Out of those two things, the snatching is most interesting, but not the first thing mentioned. I would cut the fairy tale stuff and focus more on the hook of the story, the kid being snatched, taken to prison and escaping only to find himself on a treacherous journey.

The writing was good but the book starts a little slow. There's nothing going on. But if I were reading this I probably would keep going to see if something happens soon. I did enjoy the writing. Just a couple nit-picks. If the main character is oblivious to the screeching, don't put it in. He's oblivious to it. Just a minor point of view violation. The other nit-pick is that there's a stray end parenthesis after course. There's no starting parenthesis. This makes me think this might need an editor. (I know, mistakes happen even with an editor, but if this wasn't edited by someone else I might suggest hiring someone.)

And, lastly, middle grade is probably a tough sell for an ebook. I would suspect middle grade will sell better in the future as more kids get ereaders, but right now I think it's mostly adults who own them, and while I know adults who read young adult books, I don't know a lot of adults reading middle grade books.

What do you guys think?
Posted by Victorine at 8:22 AM