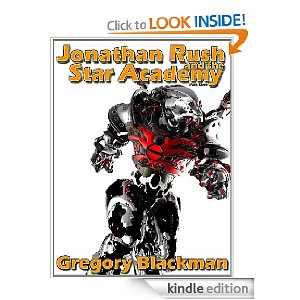 Author: Gregory Blackman
Genre: Science Fiction
How long it's been on sale: A week when submitted to this blog
Current price: Free
Total sold so far: 7 before it went free
Link to book on Amazon: Jonathan Rush and the Star Academy: Part One (The Star Master Trilogy)

The Dark Prince has emerged from behind the shadows, bringing forth an invasion of terrifying scale. The Star Academy’s only hope for salvation rests in the hands of an anxious, fourteen year old boy named Jonathan Rush and his companions.

Jonathan Rush and the Star Academy is the coming of age story about a cautious young teen, thrown into the science-fiction adventure of a lifetime. The stakes are high and time is running out. If the Star Academy is going to have any chance for survival, Johnny needs to find a way to believe in himself before all hope is lost.

Review Excerpts:
"Through uncomplicated storytelling we watch Jonathan Rush grow up a little more with each page turn...and growing up can be quite a roller coaster ride at The Star Academy." - WornPages, www.wornpages.com

"This is a very interesting science fiction for youth that tends to show them how to stand up for themselves." - Miss Lynn's Books and More, misslynnsbooks-n-more.blogspot.com

Jonathan Rush, or Johnny, as he liked to be called, was not like the heroes in most stories.  He was a relatively small boy, with messy, dusty blond hair.  Often he would get picked on because of his small stature.  He was not a strong boy, nor was he a confident boy.  He was prone to panic attacks, and carried about his daily life with a general sense of shyness.

What Johnny did have was a wild imagination that protected him from the world around him.  Often, this imagination would extend into his dreams, where he could be the hero he never believed he could be.  In fact, he was having one such dream right now.

Johnny tossed and turned in his bed.  This time, it was not a dream however, but a terrifying nightmare unlike any the young boy had ever had before.

He was somewhere not of this Earth, that much was clear.  He walked the hallway of a futuristic structure.  Black metal walls stood high in the air, creating the daunting feeling that made him feel much smaller than he really was.  So weird and wondrous, he thought, as he walked down the hallways of his surreal surroundings.

“We are ready to begin the invasion,” a ghostly voice boomed from around the hallway.

Hesitantly, Johnny rounded the hallway, eventually coming to an opening of a large room.  The room was a throne room by the looks of it.  Soldiers stood at attention, all the way down to a large golden throne; set above everything else, a dozen steps above.

The warriors wore the armor of knights, only there was nothing holy or honorable about them. They wore jet black armor with blood red engravings carved on their breastplates.

Vicki's Comments: Although this is free, I'm going to put this up anyway. These suggestions might help for when it's not free, or help determine why the second book isn't selling as well.

Now, let's talk about Jonathan Rush and the Star Academy: Part 1. The image is good, but I'm put off by the white background. Most science fiction books have black or dark blue backgrounds, probably to give the "space" feeling to it.

The next book doesn't look at all like this. In fact, it's not the next book at all, it's part 1 and part 2 which confuses me. I will place it here so the readers of this blog can see: 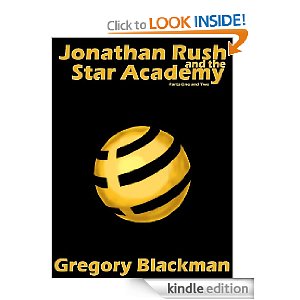 They don't seem to go together. I would pick which style fits the book more and stick with one style, otherwise you'll confuse the readers. (Since the main character is a teen, I would go for the younger feeling character, just make the background darker.)

The description is quite vague, I'd like to know what I'm going to be reading about before I pick up a book. Things like "thrown into the science-fiction adventure of a lifetime" and "the stakes are high and time is running out" and also "before all hope is lost" don't tell me what the plot is about. All I know about the book is there's a star academy and it's being invaded by some bad guy named The Dark Prince. Sorry, but there's no hook here for me. I want to know exactly what the stakes are, what this boy must do, and why he's the one that must do it.

The one review on this mentions it ends with a cliff hanger. This, and the fact that parts 1 and 2 are sold together makes me unsure of what I'm getting with this book. Is this a novel that was split up into two or three parts and are being sold separately? Most of the time with a trilogy all three books are complete in and of themselves and are sold separately. Why put books 1 and 2 together? And why call them "parts" instead of books? I think this is hindering sales. If they are complete novels, sell them like that. Sure, if you want book 1 to be free, that's fine, but sell book 2 as one complete book.

If this is just a part of a book, you're going to have a lot harder time selling it. Episodic novels don't sell as well, people don't like buying a part of a story. Whichever way it goes, I would be clear about it so your readers will know exactly what they are getting.

I'm not a huge fan of putting review snips in descriptions. I ignore the reviews that are in descriptions for the most part. Unless it's a quote from Stephen King, I wouldn't put it in there. You could ask the reviewers to post their reviews on Amazon, many times they will do this for the author.

Judging by the first 300 words the writing needs to be tightened up. The story starts with telling. I'm much more prone to pick up a book if the author can show me these things rather then tell them to me. For instance, "Often he would get picked on because of his small stature." I don't want to be told this, I want to have a scene in the book with bigger kids picking on the little guy. I want to be in the moment. How does he get picked on? Are the bigger kids playing "keep away" with his hat? Or is it more sinister? Are they beating him up? How does this make Jonathan feel?

I don't want to be told that he prefers Johnny, I want to see it. I want his mother to call him Jonathan and see him roll his eyes and say, "It's Johnny, mom." These things show us his personality. We can get to know him through these scenes that show instead of a paragraph dump at the beginning that just tells us this kid is small and gets picked on and prefers to be called Johnny.

There are also a lot of phrases in here that make me think this book has not been through a critique group. I found some repeated words that made this read clunky, like "daunting feeling that made him feel" and "...large room. The room was a throne room by the looks of it." The word "hallway" is also repeated four times in three short paragraphs. I feel like this could be tightened up quite a bit through joining critiquecircle.com and getting some outside eyes on the work.

Honestly, I feel like the main reason this isn't selling is because of the writing. I would highly suggest joining critiquecircle.com and jumping in with both feet. With some tightening up I think this book can do much better.

What do you guys think?
Posted by Victorine at 10:50 AM