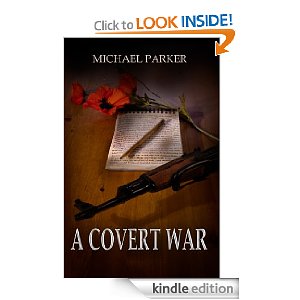 Marcus Blake's ramshackle security agency has no clients to speak of until Susan Ellis walks into his office and asks him to help find her brother who has gone missing in Afghanistan. In that moment, Marcus' world is turned upside down and he is plunged into a covert war where arms and drugs are traded by renegades within the CIA. Now, in his quest to find Susan's brother, Marcus faces terror and betrayal in a murky world where one cannot easily tell a friend from a foe.

I think that was the moment I realised that I was in love with Shakira. I had known her barely three weeks. It probably happened within days of our first meeting at the Mission. Shakira was such a lively, extroverted character; so full of humour and yet with warm simplicity. I felt a connection with her that is difficult to describe, but one I believe was reciprocated. I knew without doubt that Shakira had warmed to me as soon as we met. There was something in her manner; the way she spoke and reacted to me. I can remember how her face would light up as soon as she saw me and how the atmosphere in a room seemed to change when she walked in; such was the effect she had. I felt the change in me and could see it in others. I loved the way she would throw her head back and laugh out loud at my terrible jokes, showing her beautiful, white teeth. And then she would stop laughing and look directly at me, her lovely eyes softening. And as her laughter died away, so her mouth would change into that wonderful, disarming smile of hers.

I had been working at the Mission for a number of weeks, each day writing up my report for The Chapter on the work that the centre was undertaking. Shakira was the senior administrator there. Because of my project I often found myself in Shakira’s company. In the evenings we would walk up to the high point above the Mission and talk over the highs and lows of the day. We would sit on a fallen tree trunk that had been there for many years. It was divested now of its foliage. It had no branches; they had been lopped off so that it could be used to sit and look over the lovely countryside.

Vicki's Comments: The cover is a little dark so it's hard for me to see what is pictured. I do think having a gun on the front is a good idea, but I probably wouldn't suggest a flower or a note pad. Those things don't make me think of a thriller.

The blurb could use some work. I don't want to know that the security agency didn't have any clients. That's not a gripping story. And then there's vague things like 'turned his world upside down' and 'faces terror and betrayal.' What turns his world upside down? What is the terror he faces? The answers are what will make me want to read the story.

I would also tighten up the writing. I think the story starts at the wrong point. The book is listed as a thriller, and yet this starts off reading like a love story. And it is all telling. I want to be pulled into the story, but I'm not. I would suggest joining a critique group and getting some outside opinions on the text. Maybe they will have some suggestions on how to hook the reader early on.

What do you guys think?
Posted by Victorine at 5:30 PM