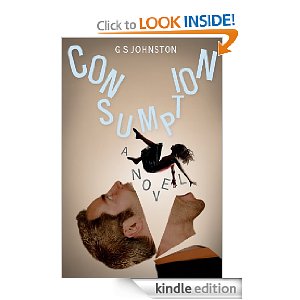 Author: GS Johnston
Genre: General Fiction
How long it's been on sale: 5 weeks
Current price: $.99
Marketing: Approached blogs for interviews - links on my website - tried to engaged in other discussion boards - organized some reviews coming up.
Total sold so far: 51
Link to book on Amazon: Consumption: A Novel

In the dying days of British Hong Kong, Sara Sexton, upon breaking up with a Greek lover, visits her old friend Martin Blake, a high-profile, high-dollar interior designer. This suspenseful story shows the effects of a lifetime friendship going toxic as modern life pulls the once quasi-siblings in opposite directions. As Sara embarks on a simpler life, Martin becomes increasingly complex and erratic. Eventually Sara is forced to a terrible choice in the name of self-preservation.

In its witty dissection of middle class ideals and aspirations, G. S. Johnston's CONSUMPTION is a heart-rending, provoking novel about the nature of long term friendships. With beautiful prose, arresting characters, and intriguing setting, Johnston evokes the cities of Hong Kong and Sydney and immerses the reader in a world that is as beautiful as it is painful.

The plane’s interior was a false night created by closed haloed shades and dim lights, time skewed and suspended.  In the final leg of its flight from London to Hong Kong, the 747 flew high above the meandering rivers and fertile deltas of China’s Hunan province, wings exposed to the blistering sun.

Sara Sexton shifted her feet around in the cramped space in front of her, just a step to the left and then to the right, squelching up and relaxing her toes, pivoting her heels.  She hoped not to wake the German man who spilled over their shared armrest into her seat, but she needed some relief from the pins and needles of what her friend Martin called cattle-class seats.  Passengers in aisle seats stand and walk the corridors when they needed to move.  Although Sara was only five feet two and a half, her petite frame felt restricted.

The long line of ceiling lights began to flicker on, one fully illuminated then the next stammering before lighting up.  Passengers stirred, yawning, hands and arms raised, stretching out their spines.  Velcro closures were ripped apart, plastic bags rustled, porthole window shades lifted to the sun.  The coffee a steward handed Sara smelled reasonable.  The German stirred back to life.

For the briefest moment, she caught the aroma of Stavros’s coffee, the strength of the day percolating through the dawning house, the first whiff of promise.  Caught off guard, for that moment she was on the myth-filled island of Ikaria, her jewel in the Greek archipelago, where she’d lived for the last year wringing every possible drop of joy out of her days and nights.
She looked down at her tray table.  Stavros wouldn’t call such a brew coffee.  She took a sip: bitter and burnt.


Vicki's Comments: I like the cover. It's a witty cover, and it makes me think the book will be comical, which might be part of the problem because the description and sample didn't read comical to me. It's possible the comedy element on the cover is subconscious to me, since it makes me think of Monty Python, so it could just be me. Maybe others will share their opinions on it.

The description could use some work. Basically, boiled down, it's telling me this: Sara breaks up with her lover and goes to visit an old friend. They were once very close, but now have been pulled in different directions. Sarah likes a simple life, her friend's life is more complex. That's it. There has to be something that happens in the book if it's suspenseful as the description says. Where is the suspense? What happens that is suspenseful? I'd like to see that described.

And then the end of the description reads like it's a review or a comment from someone about the book, but there's no attribution so it looks like the author is saying this about his own novel which comes across poorly, in my opinion. I would cut that last paragraph.

The actual writing could use some editing. I saw many tense issues, like: "Passengers in aisle seats stand and walk the corridors when they needed to move." The first part is in present tense, and yet the last part is in the past tense. This was hard for me to get past as I read. I think an editor would be able to help with the tense issues and be able to polish up the manuscript.

The beginning of the novel didn't hook me as a reader. There's a girl on a plane. She's uncomfortable. The coffee tastes bad. Nothing much is happening. It's possible that this book needs to start at a different point in the story when something more is going on. But, as always, this is just my opinion.

What do you guys think?
Posted by Victorine at 6:43 PM