FOR EVERY ACTION There Are Consequences 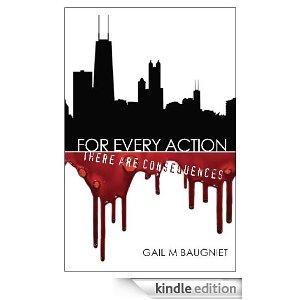 Marketing: Daily/Weekly Mentions on Twitter, Facebook, and personal blog; one library appearance; hand out business cards;
Total sold so far: 12
Link to book on Amazon: FOR EVERY ACTION There Are Consequences

Pepper Bibeau's insurance investigations for a Wisconsin-based company sometimes involve a murder, but she never thought she would cause one.

Days before the 1968 Democratic Convention, Pepper arrives in Chicago to settle questionable medical claims for an elusive doctor. Her assignment also includes a background check on a life insurance beneficiary who admits to stabbing his wife.

When a close friend is killed, and Pepper is hospitalized after an unprovoked attack, a homicide detective decides someone wants to put a stop to her investigations. For her safety, he suggests she return to Wisconsin, but Pepper is determined to learn why her insurance investigation has stirred up a tragic chain of events. What she discovers are the devastating consequences of one person's greed that she must expose before someone stops her, permanently.


Friday, August 2, 1968 Wisconsin
Our office coordinator handed me the life insurance claim at noon on Friday. Then she leaned against my desk and popped the cover on a jar of Li Hing Mui dried mango, helping herself to a couple of slices while I skimmed the file.
The coroner’s report of the death scene described numerous knife wounds inflicted on the female and copious amounts of blood sprayed across a bathroom mirror. The fine hairs on my neck bristled as I imagined the victim watching her attacker approach. Had the woman seen the knife arch over her shoulder before she felt the first impact? Or had fortune allowed her to lose consciousness without ever realizing the horror of her imminent death?
I looked up and gave Liz a squint-eyed stare for dropping the case on me this late in the week. She brushed Li Hing Mui powder off her hands and flashed me a raised-palms “don’t shoot the messenger” sign.
“Sorry, Pepper. You know Mr. Sullivan always has the last word.” She picked up a business card that had fallen to the floor and set it on my desk. As she exited my office, she fingered the dried maile lei draped over the doorframe.
The maile lei and the mango were souvenirs from my twenty-sixth birthday party last December. I’d celebrated in Hawaii with family who resided on the Big Island near the small town of Hawi. The occasion remained bittersweet in my memory. I’d resigned my army nurse corps commission in October and had flown straight to the Islands. My mother had returned several months earlier. She died quietly within weeks of my arrival. My son, Nate, continued to live there with relatives.
I glanced back at the life insurance file on my desk and canceled any
Vicki's Comments: Looking at the cover, there are a lot of good things going for it. A lot of mystery/suspense/thriller books have city landscapes on them. I also like the blood. It's not your usual book cover design, but I don't know that it's hurting the book. I think it's well designed and I don't think I would change it right away. Now, if you get a lot of people saying they didn't think it was a mystery, or the cover wasn't attractive to them, maybe think about changing it. But my gut tells me it's a good cover.

The description could use a little tweaking, but honestly I like it too. I think it ends stronger than it starts, though. I think some of the details that are in the beginning can be cut down to the important stuff. Maybe start with something like: When insurance investigator Pepper Bibeau is sent to Chicago to examine questionable medical claims, she finds out the hard way someone wants to put a stop to her inquiry.

In reading the first 300 words, I'm getting the feeling that this novel will have a lot of details included that might not be very important. Is it necessary that we know it's noon on Friday? We can tell it's late in the week when she gives Liz the squint-eyed stare. I'd cut the noon on Friday. Is it important that she's eating Li Hing Mui dried mango? It seems like it's forced. I also don't like the back story that comes out so soon in the beginning. I don't know the character yet, so I really don't care that she had celebrated her twenty-sixth birthday in Hawii. And that paragraph seemed all over the place starting with the birthday, going on to the army nurse corps, and then her mother's death, and ending with her son living with relatives.

Since this is the beginning of the book, it needs to hook the reader right away. I think there's a great premise to this book, and I like the style of the writing. I think the beginning can be stronger, maybe with the help of a critique group. Once there's a strong hook I think this novel can really take off.

My only other suggestion would be to submit the book to book bloggers, and become active over at Kindleboards.com if you're not already.

What do you guys think?
Posted by Victorine at 8:08 PM

Email ThisBlogThis!Share to TwitterShare to FacebookShare to Pinterest
Labels: Mystery