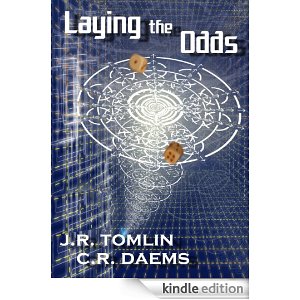 No gambler in all the Dukedoms is more cunning than Wrai. Forced to earn his living in taverns and gambling dens, he plays to win, even when it means loading the dice. He's put his life in jeopardy countless times, but now he faces a chance that may make his luck run out.

But some risks are too good to refuse. Determined to gain an inheritance, Wrai steals a pendant from the father who rejected him, unaware of the deadly magick locked within. Soon the pendant is out his hands, and Wrai finds himself in a race against time. Can he put things right? Or will his actions destroy the Dukedoms and mean the end of freedom?

Wrai propped his boots on the rungs of the chair opposite him and took a deep drink of his ale, mentally cursing being stuck in this cesspit of a town. Why Krelton of all town in the four dukedoms of Ardalak?

The storm seemed to have kept most of the locals at home. Two workmen in homespun slumped wearily at a table. A merchant with a sword-carrying guard at this elbow stood at the bar talking to the innkeeper. Outside, the inn’s sign banged in the wind.

The horse fair at Rystar started in two days and he wouldn’t make it in time. A storm had left ruts and potholes deep enough to swallow a horse. The post-coach he was traveling in had hit one full tilt. When the axle shattered, it threw the coach tumbling. Wrai and the driver had walked away with only a few bruises, but the smith would take days to repair the damage.

Wrai wouldn’t make the profit he’d expected. Bollocks, he’d counted on that gold. He couldn't take care of Amalie when he was traveling all the time, having to duck out when someone decided he'd won a little too often. A gambling house he’d been eyeing would be perfect, if he could find the money. His stomach coiled at the thought of something happening to his daughter while he was gone as it had to her mother.

Wrai banged his mug down on the table. The innkeeper lifted his head to stare, so Wrai nodded to the man and leaned back again. No one else paid him any mind.

He slipped his fingers under his shirt and into his money pouch to slide over the ten silver pfennigs and, reassuringly heavy, five gold marks.

Vicki's Comments: I think the cover on this book looks more science fiction than fantasy to me. The blue with the grid seems to suggest technical instead of magical. I would also take out the dice. I know the protagonist uses dice in the book, but to me this wouldn't give the right feeling on a fantasy cover. I would try going for something that looks magical. Maybe go onto istockphoto.com and do a search for magic? Just a thought.

The blurb does need work as well. The first paragraph seems like back story to me. You could say this in one "when" sentence. "When Wrai, a gambler and a cheat, steals his estranged father's pendant, X Y and Z happen." This might be regional, but "out his hands" reads funny to me. I would have said "out of his hands." I also don't know what needs putting right. What does the pendant do? With some work I think it could be much better.

The writing also needs a little attention. "Why Krelton of all town in the four dukedoms..." I think this should be "towns." "Slumped wearily" is redundant to me, if they're slumping I'm not picturing them energetic. "The horse fair at Rystar started in two days and he wouldn’t make it in time." Since you had just talked about a merchant and his guard, it took me a second to realize "he" meant Wrai again.

I'll admit I'm being very nit-picky here. All in all, I think the writing is good. Maybe an editor would help with the little things? My biggest concern in the cover, followed by the blurb. I think this book can do a lot better with a few changes.

What do you guys think?
Posted by Victorine at 11:59 AM