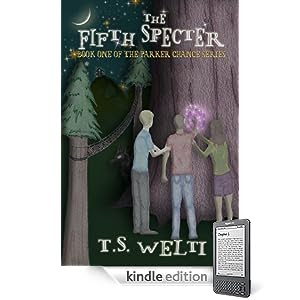 Author: T.S. Welti
How long it's been for sale: 5 days
Total sold so far: 4
Click this to see it on Amazon.
Product Description:
When thirteen-year-old Parker Chance stumbles upon a photograph of his dead birth mother he has no idea this mysterious picture will lead him to a land where the Law of Fives is never wrong....

Thirteen-year-old Parker Chance has endured years of ridicule at the hands of his adoptive family on account of his frequent “hallucinations”—until he finally decides to run away. His escape through the forest doesn’t quite go as planned when Parker’s life is saved by a stranger who claims to have the power to control electricity. The man uses this power to zap Parker into a tiny village buried in the mountains of Northern California.

The village of Stonyford Hollow is home to a species of humans who have evolved superhuman traits. Pieces of Parker’s troubled past begin to click into place when he discovers he is one of them.

Parker begins attending Knobhouse Academy where he learns he is one of five Specters in the universe with the power to travel by portal. As usual, Parker flouts the rules with a little harmless portal-hopping, but it all goes awry when he discovers someone wants to use his power to break a notorious scientist out of prison—the same crackpot responsible for his birth mother's disappearance. Though Parker has been warned to put the mysterious circumstances of his mother’s disappearance behind him, he and his new friends are too curious for their own good.

"I didn't want it to end."
- Cristina Elberson, Reader

"Once I started reading this book, I couldn't put it down. Unraveling the mysteries that were unfolding in young Parker's life compelled me to keep turning those pages. This book was completely enjoyable. I am, seriously, looking forward to this writer's next book."
- Laura Fagundes, Reader
First 300 words:
The rumor that parents who adopt their children love their children more has been greatly exaggerated. When Clarence and Victoria Rooney adopted eleven-month-old Parker Chance, they didn’t do so out of love.


Parker learned this when he was just four years old and dreadful Tommy Nichols called Parker a “’tinky adoption baby” for having a different last name than the Rooneys. His adoptive parents never bothered to change Parker’s last name to Rooney. “Too much paperwork,” Clarence muttered when Parker asked him about it. When Parker was eight, Clarence and Victoria Rooney couldn’t even be bothered to attend the school board meeting where Parker was expelled from public school permanently.


Two years after being booted out of public school, ten-year-old Parker was now sitting quietly at the kitchen table with a bag of crayon nubs drawing superheroes in his composition book. He was waiting for his private teacher, Miss Mopkiss, who was late for their daily lesson—as usual.
Vicki's Comments: Why isn't this selling? Well, for starters, it's only been for sale for five days. You may have come at this with unrealistic expectations. I only sold seven copies my first month. I know many more authors who would have loved to sell four books in their first five days out. When I first published, I had the goal of selling one book a day. After that was easy, I increased my goal to three books a day. I think if you start out with more realistic goals, you won't be so discouraged.

However, I'm sure you came for more of a critique of your book, so I'll take a stab at it. The cover looks good for a middle grade novel, except the title and author names are hard to make out in thumbnail size. It also might be a little hard to figure out what the characters are doing. It does give me the 'fantasy' vibe, though, so I think you're doing something right there.

Middle grade is a tough sell to adults. You mentioned you've been hitting the social media circuits hard. It's probably adults you're talking to, no? If you've only been at this for five days, it takes time to build up connections in social media. I sure hope you're not out there spamming all the message boards with links to your book. That won't work. You have to chat and get to know people. That takes much longer than five days.

Blurb: I would work on your blurb. You repeat thirteen-year-old Parker Chance, which gives me the impression your writing will be clunky. Also, I feel like the description is too long. It should hook the reader and give them the desire to read more, not outline the whole plot of the book.

And of course, as always, these are just my thoughts and impressions as I am looking at your book. Take it with a grain of salt.

Now your turn, everyone. Why do you think this book isn't selling?
Posted by Victorine at 2:51 PM