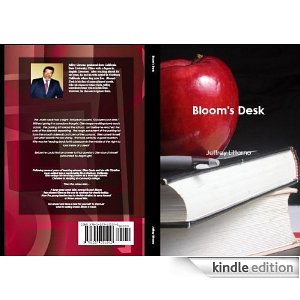 Author: Jeffrey Littorno
Genre: Horror
How long it's been on sale: 3 months
Current price: $6.99
Marketing: I have started a website/blog, Tweeted about book and links, used Book Buzzer, gotten  reviews, and sent out press releases.
Total sold so far: 16
Link to book on Amazon: Bloom's Desk

Following several years of teaching abroad, Glen Davis and his wife Christine have settled into a comfortable life in Northern California. Glen enjoys teaching at a local high school. Christine is studying at community college.
Then the voices start in Glen's head...
A long-dead serial killer named Robert Bloom has chosen Glen as the one to continue his deadly hobby. Now the young teacher must choose between saving himself or those around him.

Glen Davis didn’t believe in ghosts. But ghosts believed in him.

However, at this moment, such profound philosophical issues had no place within his mind. With his eyes clinched tightly closed, Glen was focused upon the banging of the MRI machine. The dull thuds did nothing but kick off a new round of the tooth-rattling throbs in his forehead. These headaches were part of the reason he had come to the doctor’s office and then to the MRI machine. Next came the loud blaring of what sounded like a truck horn and the machine gun clack-clack-clack seemingly designed to twist his spine.

At thirty-seven, Glen had enjoyed relatively good health with only the scattered bouts with the cold and flu. Most of the other teachers at Theodore Roosevelt High School suffered more from the constant stream of ailments students brought into the classrooms. He had been teaching sophomore and junior English at the high school for six years and had no plans to leave.

Finally, the slab under him slid out of the machine, and the nurse came back. “Looks like we’re all done.” She said trying to force cheerfulness into her voice that only sounded like forced cheerfulness. She was a fifty-ish, tall, unattractive woman who brought with her perfume that had a slight vanilla smell. Rather than having a pleasant effect on Glen’s senses, it only made him aware of the room’s other odors.

There was the usual medical facility tinge of disinfectant and medication. Alongside those, Glen detected another odor. This one seemed to be the product of the fear and anxiety caused by the MRI machine. Whether in his mind or elsewhere, Glen heard the thoughts of a middle-aged man worrying about a newly-discovered lump in the left side of his throat.

Vicki's Comments: The first thing people see is the cover. It should be cropped to just show the front, so that's the first thing I recommend. Second, the apple and books do not suggest horror at all. I would put something on the cover to indicate there's a killer in this book. A gun, a knife, some blood...something to show it's horror.

In the description, I would start with the part about the dead killer who wants Glen to continue his hobby for him. That's the hook in your story. No one is going to care that Glen had been teaching abroad, or that he's settled in Northern California. That's back story, and not very exciting. There's a murderer talking to him in his head, for heaven's sake. That's the part that should be highlighted. With a few tweaks, I think the description can read much better and give the reader that "I must buy this" feeling.

The writing could be tightened up a bit. I would cut any back story from the first chapter. I would suggest a critique group to help get rid of some weird words or redundant phrasing, and start with a bang. (Example: Eyes clinched tightly closed. Do you mean clenched? And how do you clench loosely? You don't need to clarify it was tightly closed if you say clenched.) The first few paragraphs are the most important in a book, and you want to suck the reader in right from the beginning. I think the premise for this book is good, but it needs some work to really shine.

One last thing. I think the price is too high. I would lower it. Granted, some people find that 99 cents is too low for them, so play around with price a little. Maybe yours sells better at $2.99. But $6.99 is very high for a self-published book, and will be an instant turn-off for many people.

What do you guys think?
Posted by Victorine at 11:42 AM

Email ThisBlogThis!Share to TwitterShare to FacebookShare to Pinterest
Labels: Horror