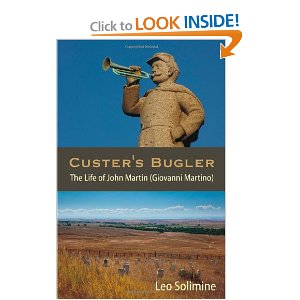 Custer's Bugler is an examination into the life of John Martin (born Giovanni Martino). Abandoned as a baby, he marched with Garibaldi before coming to America. Within three years, Martino (now Martin) would find a permanent place in American history by carrying Custer's final dispatch from the Little Big Horn. He continued in active military service for another 30 years before passing away in 1922. John Martin lived a historical odyssey, from his earliest days in rural southern Italy to life on the Plains as a Cavalry trooper before his final act in the rapidly modernizing world of New York City. Custer's Bugler: The Life of John Martin (Giovanni Martino) details his extraordinary story.

Custer leaned forward in his saddle and intently studied the Indian village stretched across the valley below.  His battalion of five companies from the U.S. Seventh Cavalry Regiment had just halted on a high ridge overlooking the Little Bighorn River.  As officers peered through field glasses, a few of them remarked on the size of the village; across the river, as far as they could see, hundreds upon hundreds of tepees carpeted the valley floor.  After weeks of hard riding, General George Custer and the Seventh Cavalry had found their quarry.

“These hills and bluffs hid most of the village from us,” observed the General as he scanned the valley through his field glasses.  Lieutenant William Cooke, Custer’s experienced adjutant, nodded as his eyes shifted from the massive village to his commander.

“We got them this time,” Custer exclaimed to Cooke and the officers.  “We got ‘em!”  He turned in the saddle and waved his hat to the waiting troopers.  “Hurrah, boys, we’ve got them!” he shouted.  “We’ll finish them up and then go home to our station!”  Over two hundred troopers and scouts replied with three dust-choked cheers.

Custer rejoined the battalion and led them at a gallop for a mile along the bluffs.  As they reached a wide ravine that emptied into the river and valley below, Custer once gain halted the battalion.  Instinctively, Cooke nudged his mount closer to Custer while the troopers dismounted and adjusted their saddles; a few checked their weapons in preparation for the fight ahead.  Overhead, the Montana sun blazed across a cloudless sky, a slight breeze offered little relief to the sweating troopers and horses.

“We need Benteen and the packs now,” Custer snapped.  “Send another messenger!”  Cooke motioned and a young trooper quickly responded, a brass bugle across his back dangled as he trotted up to the General.

Comments: I do not specify on my submission page that I only take ebooks, so I will take a stab at this paperback. This book is 122 pages and it costs $25.95. Wow. That's a huge price tag for a paperback book, even a long one. This one is pretty short. Without looking at anything else, that's going to be a major reason this book isn't selling. It's priced way too high. (Which might be out of the author's hands, because I noticed it's published by Universal Publishers.)

The cover is okay, but I don't think it looks as professional as it could. I'm not fond of the bar across the middle. The man on top looks like he is missing his legs, which looks odd to me. I think if it were me, I would drop the bottom altogether and just use the whole photo of the statue and some nice typography. (Although the current font isn't bad.)

I'm not really hooked by the description. (However, I'm not usually a person to seek out historical books, so take that with a grain of salt.) I don't really know much about John Martin, and this description isn't making me want to read more. Also, isn't Bighorn one word? Having it as two words in the description might be giving people who love this stuff the idea that this book isn't credible. I would get more opinions on this, though, as I'm not very knowledgeable about trying to sell historical novels.

In the actual text, I see a few things that I might nit pick at if I were critiquing it. First of all, whose point of view are we in here? We flit in and out of several POV's and it makes me feel like the author is trying to write in omniscient, but it's not working very well. I would start off in John Martin's point of view. This book is about him, after all. How is he feeling at this moment? I would like to see this moment from his point of view.

There are also a few little things, adverbs I would cut, creative dialogue tags that I would cut, things like that. Maybe see what others say about the writing. You could put the first chapter up on critiquecircle.com to get lots of opinions.

Now, after saying all that, I'm going to say that the biggest reason this isn't selling is because it's not an ebook, it's an overpriced paperback. My suggestion would be to put this book out as an ebook, price it in the $4 range, and get some professional help with the cover. See what other authors say about the text and the description. Historical isn't my specialty.

What do you guys think?
Posted by Victorine at 8:19 AM