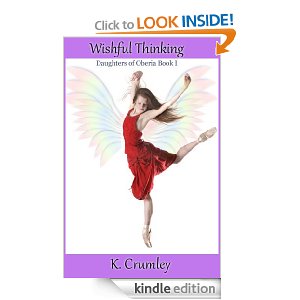 One stormy night Maevis Etherwood came home and found her husband in bed with another woman...
What exactly transpired afterward remained a mystery, even to Maevis herself.

The Detectives investigating the scene are stumped by the lack of any forensic evidence....
But what the two men remain oblivious to is the fact that she is a faerie, losing control of her powers in this non-magical realm due to fatal illness.

Could Maevis really have killed the man she loved with magic? Or is there a far more treacherous power at work?

Excerpt:
An image flashed through her mind of the night in question. It was like a nightmare that she had woken up from, and only had the faintest images crossed her mind of that horrid evening. Of finding the man she loved and trusted in bed with another—in her bed. She remembered flying, wings unfurled…she remembered her belongings and a few of his flying across the room, like a tornado blowing through their home. The look of horror on that girl's face as she screamed “She has wings!” as if Maevis was a monster. It only made the faerie more hurt, angrier…Then Maevis’ mind went blank. She cannot remember a thing after that, except for waking up and hearing her sisters call her name, Fiona shrieking…
They were dead.
He was dead.

Maevis stumbled, and then grasped the barre with pale trembling hands. She felt feverish and weak as she was warming up in the studio for the evening performance. She fought back the feelings of grogginess, willed away the haziness that filled her eyelids. The show must go on. Right at that moment, the artistic director entered the room. “Perfect timing,” She said with a smirk. She already knew what he was about to say. Miguel was starting to sound like a parrot, repeating the same old lines.

“Easy old girl,” he said. “Don’t you think that’s a sign that you should retire?”

“Not yet.” Maevis replied, “I’ll know when that day comes. But, believe me, it’s a ways off yet.”

“Every dancer’s career has its expiration date.” He said, “Even yours Miss Margot Fonteyn-of-Youth.”

Maevis snickered at his weak attempt at humor. “Miguel, If I fall on my buttocks in the middle of the stage tonight then I’ll—”

“You’ll what dear?” He said, in a condescending tone. “Finally, step aside and allow one of the new upcoming ballerinas to have the spotlight?”

“You have ulterior motives,” She said as she gained a bit of strength. “Look Tara, Bridgette or whatever young girl you’re romancing this week will have her time in the spotlight soon enough.”

“Besides, this is opening night!” She protested, “You can’t have some understudy just step into the principal role tonight! I’ve been rehearsing the role of Giselle for months now. I’ve worked hard for this!”

“Maybe a little too hard…” He countered, “You are what now? Thirty-five?”

“Thirty-two!” She said; and tried to conceal feeling insulted.

Comments: The cover definitely does not give me an urban fantasy feeling. The cover suggests to me that the book is light and fun. If this is not the case, I would change the image and coloring. I'm not in love with the stripes on top and bottom. I might play around with taking those off. I also would change the font. The wings look tacked onto a photo of a ballerina. They do not look professional to me. Even some graphic artists have trouble making something like this look real. I would try to find a cover designer that can do this book justice.

The description could use some tweaking, in my opinion. Starting with a stormy night makes me think of Snoopy writing on his typewriter. "It was a dark and stormy night." That actually comes from a real book, by the way. Paul Clifford. If you google "Purple Prose" you will find a Wiki article that talks about it. There now is a contest named after the author, Edward Bulwer-Lytton, for people to come up with the first sentences to the 'worst of all possible novels.' I would take the stormy night out, and try to cut any other instances of purple prose if you find them.

Personally, I'm not a fan of questions in book descriptions. Most of the time the questions are obvious. "Will John succeed in finding the love of his life?" (Well, of course he will. The book would suck if he didn't.) "Will little Jimmy escape from the kidnappers?" (He will escape. The book would suck if he didn't.) "Could Maevis really have killed the man she loved with magic? Or is there a far more treacherous power at work?" (I think we all know the answer to these questions, so why even ask them?)

Here's the deal. If you take the questions out and turn them into statements, instead of the reader already knowing the answer, you create a sense of the reader wanting to know how the protagonist accomplishes these things. Example: Will little Jimmy escape from the kidnappers? - Let's turn this into a statement. "Jimmy must find a way to escape from his kidnappers before time runs out." This statement makes me want to take this journey with him. He must escape. We know he does, but the how is what is important. That is why we read books and why we must turn the page to find out. In almost every book we read, we already know what will happen in the end. The hero will save the heroine. Harry will defeat Voldemort. Bella won't die. The journey is what is important.

I would also take the excerpt out of the description. I dislike excerpts in descriptions, but maybe that's just a personal thing. See what others say.

The beginning of the book needs a lot of editing. There are capitalized words that should be lower case, there are commas that should be periods, and periods that should be commas. I would suggest hiring an editor, and before you do I would get sample edits from at least 5 different editors to compare them.

The actual text - the scene - isn't grabbing me. It's a woman past her prime wanting to dance, and her health isn't the best. Her instructor is telling her to quit. I don't know the woman, so this isn't particularly moving to me. I'm also reading some 'telling' in here. I think a critique group would help tighten this prose up. I would suggest joining a critique group and seeing if there's a better place to start the story. I think her finding her husband in bed with another woman would be a good place.

What do you guys think?
Posted by Victorine at 12:29 PM