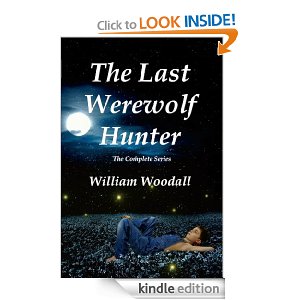 Author: William Woodall
Genre: Young Adult Christian Fantasy
How long it's been on sale: February 2012
Current price: $4.97
Marketing: ?
Total sold so far: 23 in the US, 6 in the UK
Link to book on Amazon: The Last Werewolf Hunter: The Complete Series

Zach Trewick always thought he'd become a writer someday, or maybe play baseball for the Texas Rangers.  What he never imagined in his craziest dreams was that he'd find himself dodging bullets and crashing cars off mountainsides, let alone that he'd ever be expected to break the ancient werewolf curse which hangs over his family.

Even worse, his parents are determined to fight him tooth and nail to keep the Curse intact, his friends are not much help, and he's not quite sure his girlfriend isn't secretly trying to kill him.

And that's just for starters.

But Zach is the last of the werewolf hunters, the long-foretold Curse-Breaker who can wipe out the wolves forever, and he's not the type to give up just because of a few minor setbacks. . .

I didn’t know anything special was going on when Nana Maralyn asked me to go walking with her in the apple orchard that day.

It was late one evening after supper was over, and we walked on tiptoes so we could listen to the crickets.  Nana always used to tell me they were like people, and sang their prettiest songs whenever they were saddest, when they knew that winter was coming.  She used to say stuff like that all the time.  It was late October in Tennessee , so I guess they didn’t have much time left.

Nana kept quiet, but I could feel the soft crease in her palm where she rested her hand on my bare shoulder.  Her claws were really sharp that night, digging into my skin like tacks, and I shifted my weight uncomfortably.

“Be still, Zach,” she commanded.  I quit squirming; Nana had a way of pinching the very blood out of you when you didn’t mind her.

There was a scrabbly sound in the weeds and we both froze.  Nana smiled a tight little smile and dug her claws into my shoulder a bit deeper with anticipation.

We didn’t have long to wait.  In a minute a brown rabbit poked his head up from the tangled honeysuckle and hopped out beside the path.  He sniffed the air with his wrinkled little nose, and then crouched down to nibble on the dry grass.

Comments: The cover isn't bad. I do believe it gives a mild fantasy feeling, but that could be tweaked to be less subtle. Overall I do think the cover looks good. If it continues to struggle after changing a few other things, maybe look at the cover.

The description talks about the fantasy element, but doesn't mention that the book is aimed toward a Christian audience. This is not a Good Thing(tm) in my humble opinion. Those looking for a Christian book won't know that this is one, and those who do not like Christian themes might not know this book has them and be disappointed. I think it should be clear in the description.

What makes this book a Christian book? Is it more like the Chronicles of Narnia where it's subtle? Or is it more blatant in the book? (The boy looses faith, then has to find it again, for instance.) I would want to know what I'm getting into before buying the book. Make the Christian theme clear in the description.

Setting aside the Christian themes, the description could be improved. I had to read it three times to figure out the boy isn't dodging bullets in his crazy dreams. (Sorry, I skim. Bad habit of mine.) I think the description needs a bit more focus. We don't find out what Zach is up against. I know he's fighting some curse, but what are the stakes? And how does one fight a curse? I can't visualize it. It's too vague.

The beginning of the book is fine, but it's all back story. I'd rather see this scene from the point of view of someone experiencing it right now. We can always jump forward in time later.

My suggestion would be to mess with the description first, and maybe get more opinions on the cover and the first 300 words. Maybe putting the book free for a short time would help too. What do you guys think?
Posted by Victorine at 10:05 AM