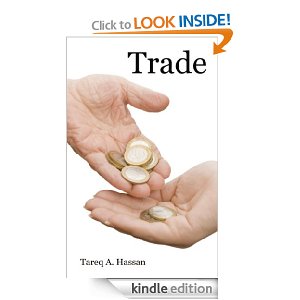 "Hassan doesn't take a simple or mundane route with his story, he invites the reader to immerse himself (or herself) in the scene, using sound, smell, touch, and layers of delicately conceived detail and texture. This is a thriller for both the casual reader and the literary minded."  5 out of 5 Stars

"This author has either spent time in the Middle East or has done extensive research into the 'War on Terror' topic as the plot hinges on a type of criminal scheming that only an insider understands well enough to explain."  5 out of 5 Stars

"I don't know what the author's background is, but he writes with the authority and attention of detail of someone with background in either the intelligence services or the military..."  5 out of 5 Stars

"A well written and accessible novel despite the 'speciality-speak.'"  5 out of 5 Stars

Patricia Foley, anti-semite, homophobe, and previously one of the CIA's rising stars, has been exiled to the basement for the past ten years. Chase Anderson, Chief of the Near East Division and Pat's former mentor, feels partially responsible for her fall from grace. Pete Marcone and Adriel Parish, FBI, have penetrated a domestic cell of Muslim extremists, and the Powers-that-Be want the success leveraged into an international operation. Anderson offers the simple hand-holding exercise to Pat, but Pat has plans of her own. And figuring into those plans, Danny Golan, Israeli master spy, Pat's former lover, and the principal cause of her misfortunes.

Samer Ajdad walks the tunnels.  The tunnels contain enough provisions to sustain a small army.  Food, clothes, medicine, rumors of gold even.  Samer rides the colossal escalator up then takes John Street all the way down to the river.

Which is where he sees him again.  A white-haired apparition in a frayed suit making unscheduled appearances outside some of the largest financial institutions in the world.  Lanky, old before his time, and to anyone with an eye for it, a soul partial to the needle.  But a tilt of the head, a raised roman nose, and the bearing of an aristocrat.

Hawkable items of every kind teeter around him.  Samples flow freely through the crowd, which consists principally of secretaries in stilettos and young turks in get-one-free suits.  The man’s voice booms above the din.  The sales patter never once falters or hesitates.  It cajoles, seduces, and finally irresistibly commands all to part with their lunchtime change.  This is a tired junkie scraping together the day’s fix, but also an artisan of the old school, his skills on display at the epicenter of the financial universe.

Up on the sidewalk in tailored suits stand the middle-aged and the ancient.  These are the titans, and they sometimes venture out to watch a master at work.

Within minutes, the mountain of junk is reduced to a few discarded boxes.  The old man makes his way to the subway, a newfound spring to his step.  The titans retreat, murmuring within earshot of their young junk bond and penny stock-selling associates, “Now that’s how shit is peddled.”

Samer, smiling, happy, makes his way back to the glass tower home of Trevers and Hown, Limited Liability Partners, with a countertop grill in one hand and a foot massager in the other.

Vicki's Comments: The cover makes me think this is a non-fiction book. It looks like a book on business. To me, it doesn't have a thriller vibe at all. On the plus side, the title is large and easy to read, and in a nice font. The author's name is a bit small, but again I do like the clean font. The cover does look professional, even if it doesn't give me the right genre message. It could just be me, so I would get some other opinions on it.

The story description isn't bad, it just feels a bit clinical to me. Maybe because it's not really written in a character's voice? I'm not sure. But I do think there's a good story here. I would get some help with the blurb. I'd like to get a feeling for the main character. As it stands, I'm not sure who the protagonist is. Is it Chase, or Pete? I hope it's not Patricia, I'm not really liking her from the description. I hope she's the antagonist. I'd like to get more of a feeling of who I'm going to be sharing my time with.

The opening. I'll confess, I'm not a fan of present tense. I cringe a bit involuntarily when I read it. I usually put a book down if I'm looking to find something for my leisure reading, unless someone has highly recommended it. Now, for the good news. I really enjoyed this beginning. I had a few minor nit picks, but the description and characters sucked me in. I found myself visualizing the scene and having a pleasant experience. I admit, this is rare for me. Usually I take several pages or even a few chapters before I get sucked into a story. This was a refreshing beginning for me.

The nit picks? I would have liked to see the first and second sentences combined. I didn't like the sentence fragment. I know they're in right now, but that one bothered me. Like I said, pretty nit picky. I think this book needs a new cover and a description tweak. If I sampled this book I would keep reading.

What do you guys think?
Posted by Victorine at 7:26 AM