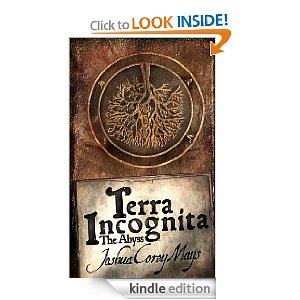 Author: Joshua Mays
Genre: Dark Fantasy
How long it's been on sale: 10 months
Current price: $.99
Marketing: I've connected with people on Facebook. Given out 50 copies at dragoncon. Sent various emails to review sites.
Total sold so far: 100
Link to book on Amazon: Terra Incognita: The Abyss

Benjamin Harking is an independent teenager who often comes home from his boarding school to an empty house. During one lonely Christmas vacation, he finds a hidden room, secreted away beneath the stairwell. Inside is an ancient book that opens a doorway into a dark world of myth and magic. Forced on a quest for four magical items, Ben will face danger at every turn, meet new allies, and do whatever it takes to complete his goals before the evil Azothothus has a chance to exact his plans -the awakening of the primeval beings known only as the Hollow.

Benjamin Harking stood on the threshold of his home and knocked on the half-open door, reluctant to enter. The hollow sound was amplified by the size of the foyer and the lack of furniture. He felt awkward coming back to this place; even after almost two years it hadn’t yet become home to him. The sudden change in lifestyle had come so quickly that he still wasn’t used to the idea of being rich. His dad had been offered a major promotion and the next thing Ben knew, they had moved into this oversized house and he was off to boarding school to get a “proper” education. The house was so large that his family had once gone a full day at home without seeing each other. It was over a hundred years old, which made it a little creepy on late nights when everything was still and quiet. The creaks and groans were loud enough to stir them from a deep sleep.

The Victorian-style mansion was located in the northern panhandle of West Virginia, near Morgantown.  They were miles from their nearest neighbor and even farther from any semblance of civilization. Ben missed his friends from Papillion, Nebraska, but he understood his father couldn’t turn down that promotion. He knew that he couldn’t blame his family for this, but it didn’t change how he felt. He wondered if they realized what they had asked of him, to give up his entire life in an instant, just to be dropped into a new and unfamiliar one. Did they understand what it felt like for him to have everything he loved taken from him and replaced with something new and unwelcoming?

As his suitcase hit the hard marble floor, he called out, “Is anyone here?” The sound of his voice had a slight echo in the vastness of the hallways and corridors, but no one replied.

Vicki's Comments: First, I like some aspects of the cover. I like the symbol, and I think the weathered/grunge look is good. There are some things I don't like about the cover. I don't think the overall design is working. In order to explain what I mean, I'm going to break the cover down into a few simplistic shapes. 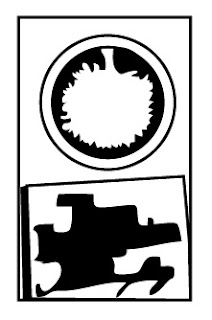 Here you can see the basic design of the book cover. The cover is divided *almost* in half by the top of the paper that the title is on. It's not quite in half, but it's close enough. When you're dividing up your space, it's best not to divide right in half. It's a design thing.

The top of the paper is also at a slight angle, which creates an uncomfortable feeling for me. It's not enough of an angle to create an interesting shape, but just slightly off, like it was meant to be straight but someone bumped it. The edge of the paper is too close to both sides, running off the edge on the one side, creating another uncomfortable element.

I rather like the symbol on top, but it's closer to the bottom paper thing than it is to the top of the page, which again makes me uncomfortable.

Now, let's look at the basic design on another fantasy novel, one that was traditionally published. 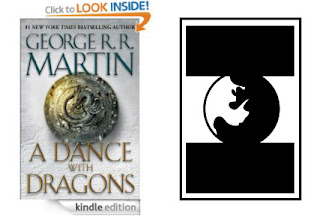 Now, I'm not suggesting you copy this cover exactly, however, there's nothing wrong with creating a similar design. There's also nothing wrong with moving things around and trying something new. Just be aware of some of the basic design rules. Here's a great video talking about composition. http://www.youtube.com/watch?v=f4c8NCvSRho

On to the description. I think there are many things in the description that could be applied to a lot of fantasy novels. I'd like to know more about what sets this book apart from the rest. A magic book. A quest. A world to save. These things are pretty universal. I'd rather find the unique things about this book and put a different spin on the description. But don't just take my word for it, because I'm much better at graphic design than I am at nit-picking blurbs. And I'm not much of a fantasy fan, so my opinion means even less.

The beginning isn't terrible, but I would like less back story and more of the scene. I'd like the back story to be given to me in little bits. But that's just me. Others might feel differently. I do think it's well written. And I like that your main character has conflict right away - coming home to an old creepy house with no one inside. Good job on that.

I think with a cover re-design, tightening up the blurb, and possibly cutting the back story from the beginning, the book will be much improved. What do you guys think?
Posted by Victorine at 12:45 PM